Slots lost a bet this morning. Last night, as it was raining, he bet Sandy a dollar that it would be clear and dry this morning. As the light rain misted, he agreed that (since he had already won another bet) they were now even. 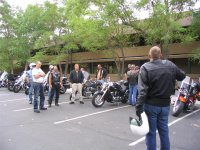 We had breakfast in the Lakeview Room. Sandy and I tried to eat light but Cat ordered the Ham Steak and had so much meat that she had to split it with Bikerdad. We then adjourned to the parking lot where the main group, the one Slots was taking to Virginia City, got its instructions. Others were going farther afield but Paul wanted to get us back before 2:00 PM when he figured that the storms would kick up again. You can see that the riders are giving him their complete attention as he lays out the riding instructions.

The group left as close to 9:00 AM sharp as was possible. There were about 19 bikes and we were about eighth from the front. As we went up and down the hills on 395 north of the Lodge, it looked great. For some reason, VROC groups usually seem to know the fundamentals of group riding. We did well until Carson City. After making the right turn on US 50 in the middle of town, the first seven bikes made it through a traffic light leaving Caddman and I at the head of the rest of the pack looking at the big red eye and watching our leader disappear in the distance. The cross road went to the airport and they had a lot of time to get through since it was a very long light. Then the turn arrows kicked in. Finally, the light turned green and I, the lost leading the lost, took the point. I could just vaguely make out some specks in the distance that might be our lead section, so I pressed the speed limit a tad. Until we caught the next red light. This proved shorter and then we were out on the four lane road so I picked the pace up again. The dots got bigger and it sure looked like our people. Eventually, as we were gaining on them and crested a hill, I looked down and saw the speedometer was reading 135 KPH. That would be about 85 MPH in the local units. About this same time, the corner of my eye caught a sign that said 45 MPH. With visions of Nevada jail cells dancing in my head, I scanned for blue lights as I simultaneously tried to slow down and make myself invisible. 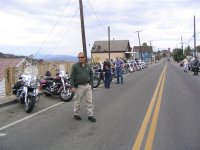 We did catch the group, a little slower than would have happened had I not seen the sign, just as they made a left at a sign that said, of all things, Virginia City. It looks like we could have found our way after all. This road led us on a winding path through hills covered with yellow grass through Silver City and Gold Hill and up to the famous Virginia City, where Sam Clemens first used the name Mark Twain. I looked for the Cartwrights and Sheriff Roy as we rolled into town, but the only steeds in evidence were our own magnificent two wheelers. We were lucky to find a long parking space at the end of town. 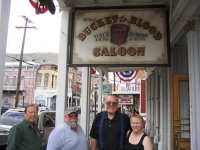 Virginia City feels like what I expected. Many old wooden buildings housing a combination of the usual tourist traps and some points of historical interest. In the heart of downtown, we stopped in at the famous Bucket of Blood Saloon where Slots, bless his heart, started a tab for those wishing refreshments. Some bought T-shirts and other souvenirs and, just before we left, a banjo player started up accompanied by a player piano. That really added to the atmosphere. On the way back to the bikes, Sherm and Lisa tried to find a place to get vintage pictures taken but the lines were longer than they wanted to wait.

Back at the bikes, Sherm, Lisa, Sandy and I headed back towards Topaz. Sherm was starting to feel a bit tired. Hell, I was tired and I wasn't in a major wreck two months ago. I took the point and we rode back down the twisty road to US 50. As I turned on 50, I noted two things. We had picked up another Vulcan (who I later found to be Bill "Cranky" Snodgrass) and, in the stretch where I had been moving at 40 MPH over the limit, there were now a Nevada State Police car and another trooper on a BMW bike. Looks like it was my lucky day. 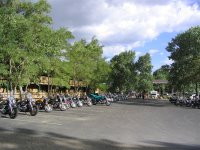 The ride back was mostly uneventful. Sherm did find at one point that the 900 doesn't pass quite as fast as the Wing, which gave Cranky and I a scare, but Sherm only laughed. Back at the Lodge, Mario and Linda had the hot dogs on. These are new members from the Tahoe area and the way they threw themselves into co-ordinating the food and beverages was nothing short of outstanding. The lines of bikes in front of our part of the hotel grew as the various riders wandered back in from their various explorations. At 2:00 PM, against all predictions, the skies were clear and some members immersed themselves in the pool. 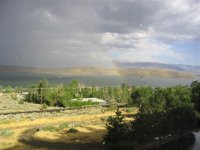 All afternoon, we watched storms roll in from the east and skirt us on the north side with some very active lightning displays as I am sure they were drenching Carson City. Finally, about supper time, it was our turn and the downpour ensued. This was followed by a rainbow over the lake, which I managed to capture half of. We didn't pursue the pot of gold. 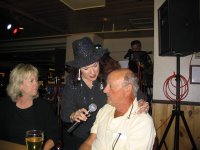 We had supper with Jim Siegelaar, our smiling Canadian brother from Lundbreck Alberta. Then we adjourned to the bar for a bit where Slots, Jack 4E and Mario picked up some rounds, and then we headed back out to the tables by the horseshoe pitch for more visiting. It's amazing how quickly things dry out here after the rain ends. After dark, Sandy headed to bed and I returned to the bar with Barb, Jack and a few others. In the photo, Cranky is helping the singer while Barb 4E looks on in wonder. When my turn came, I wish I had known the song but, after a couple of drinks, I really didn't care. Shortly thereafter, security asked if I would be good enough to stop taking pictures in the Casino. No problem, and I should have known better anyway.

Shortly after midnight, I decided to hit the hay and wandered my way back to our room.
Posted by Jim "Skid" Robinson on 7/21/2006