Sunday July 23
My alarm watch went off at 5:30 AM and we hit the ground rolling. As we loaded the gear on the bike, the Sublows and a few others were also preparing for an early departure. VSP was wandering about saying goodbye and taking some pictures.

We were underway shortly after 6:00 under an overcast and spitting sky. Just north of Topaz at Holbrook Junction, we took SR 208 that would take us east and then north through Yerrington to I-80. We met several groups of vehicles, trucks and buses, about 50 in all. From the markings, it was obvious this was a firefighting camp on the move.

Out of nowhere in this flat land, there was a small cluster of mountains. The highway followed what appeared to be the Walker River through a canyon cut in the centre. We were surprised by a mule deer (again right at a deer crossing sign) and a jackrabbit with huge ears. Once out of the valley, the level land was being irrigated and farmed and we also saw the familiar tailings of a large Anaconda Copper operation at Yerrington. This was a pleasant little road. 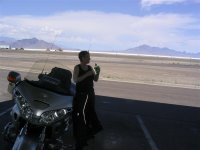 On I-80, we turned east and picked up the pace. We continued to meet clouds and light sprinkles of rain. Crossing Nevada in the heat, this is generally a good thing. Several full patch Hells Angels and some unpatched companions passed us. The full patch riders waved, but the others just stared straight ahead. Typical. We lost an hour as well as the cloud cover at the Utah border. The Salt Flats were about 105F according to my GoldWing ambient air temperature gauge. The mountains looked like they were floating in water but I knew it was a mirage since there was nothing between us and them but white salt.

The 105 continued through Salt Lake City but cooled off a bit as we climbed out on the east side. We stopped just across the border in Evanston Wyoming at the same Comfort Inn we stayed at on the way out.
Today's ride - 687 miles.

Monday July 24
We were rolling at 6:15 Mountain Time. It was cool with a tail wind. It got cooler as we approached Green River. I don't remember Rawlins Wyoming on the way out but I do remember the Shell station where I fueled. A well meaning man at Mickey D.'s suggested we avoid Cody (not on our path) because of a Hells Angels gathering there. Turns out this was their World Run.
In Nebraska, the wind changed and was from the east. Not fair. I was looking for the prevailing westerlies to push us. The temperature only hit the high 90's, but it was more humid and more oppressive.
We stopped in Kearney Nebraska for the night. The Travelodge that offered 'The Best Deal In Town' had obviously overbooked based on the fiasco in the lobby, so we went next door to the Interstate Inn and got a clean room with WiFi for the best price of the trip.
Today's ride - 680 miles

Tuesday July 25
We got a late start due to rain over Grand Island. After a pleasant chat with the motel owner, we were rolling at 7:00. Almost at once, we lost another hour as we entered the Central Time Zone.
The clouds threatened north of us, but never got down where we were. Passed a Ducati Racing Team truck. Saw a couple on a HD that we passed. We met them three more times in rest areas. They were from Muskegon Michigan and were returning from Arizona.

In Lincoln, I-80 was blocked so we had to go to a secondary road around the trouble. The police had the detour well controlled and we had little trouble. Twice I passed a Utah Mini-Cooper with a young lady and a big dog. We met her again in a rest area and found she was making the run from Salt Lake City to Wisconsin. This was her second trip of the summer.

Met a group of at least 40 Hells Angels westbound. You can tell when its them in a group because of the tight formation and the riding discipline. These didn't wave. We knew now where they were headed.
At Des Moines, we headed north on I-35. Met a couple from near Duluth on an ST-1100. They had been riding with friends on a Wing towing a trailer until the GW had a rear blowout in a curve in a contruction zone with concrete barriers and crashed. I looked at my new tire.

We turned east on I-90 and I was hit with a wave of fatigue. This often happens to me riding Interstates. We stopped and I found some bottles of Starbucks iced coffee that I loaded into the Butler Mug. Tasty and effective when combined with a short break.

We arrived in Lacrosse Wisconsin and found an Excel Inn. The WiFi gave me fits. I spent the evening arguing with a SkyWiFi techie in Vancouver BC about whether it was their fault or mine.
Today's ride - 629 miles

Wednesday July 26
There was heavy rain overnight. Morning Doppler showed a large storm south of us heading east to Milwaukee. Good thing we were headed east and north.

Quicksilver turned over 70,000 Kms (43,500 Mi.) in this stretch. Not bad for an '05.
In Oshkosh, we found it was the Experimental Aircraft Association weekend. Had we pushed on, there would have been no rooms. Headed north through Green Bay. Lost another hour below Escanaba. Riding into Escanaba, there was a large black cloud ahead of us. Luckily, it pushed out over Lake Michigan just before we got there. The streets were very wet.

Continued up onto US 2 and east towards Manistique Michigan. Another big cloud ahead and north of us. I considered heading north, but this one wasn't eastbound. It was southbound and hooked down, effectively pinning us. We saw a waterspout out over the lake and looked for cover. Lucky again the Emerald City Espresso Cafe was in an old gas station that had an overhang out front. As it started to pour, we ducked under it, parked and had lunch. Great homemade bread.

After the rain past, we headed east on 2 and north on SR 117 to Newberry and east again on SR 28. As we approached I-75, there was yet another black cloud in our path. We turned north to the Soo and Canada just before we reached it. The UP always seems to have menacing weather. 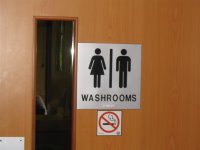 From the International Bridge looking east, the direction we were heading, it looked grim. Black clouds boiling and roiling. I wanted to stop and say Hi to Mom but it was already 5:30 and the rest of the day looked rough. The border guy passed us through without ID (again) and we stopped at Timmie's to put on rain suits. The photo is for Don. He'll understand:-)

The funny thing is that we never needed the rain suits. I don't know where the black clouds went but it was not a bad ride home. Considering the weather around us, I'll ascribe our staying dry to The Luck Of The Irish. We got in about 9:00.
Today's ride - 725 miles

I remember seeing those signs at the Quality Inn in Calgary that Tiny and I stayed at during our ride to the RITCR. I just thought that down that hall was the "laundry room" for the motel.