Not really, but it crossed my mind as we went through Winnemucca today. More on that later. 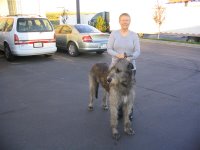 As we were loading up and grabbing our hotel breakfast, a lady walked by with a dog. Now this wasn't just any dog. It was a two year old Irish wolfhound. I've only seen them in pictures up until now. The lady walking him said he was 175 pounds but he had another year of growing to do. I was surprised by how gentle and peaceful he was. He even let Sandy hold his leash for a picture.

We said goodbye to our Ontario friends and, after heading out the wrong way, got turned around and found I-80 West. 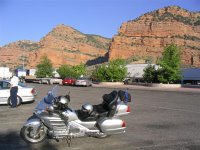 It was cool this morning, low 50's. About thirty miles into Utah, we stopped at a rest area so Sandy could put on her electric vest. The Utah scenery started early. This isn't spectacular like Moab or Zion, but it is very pretty.

The ride to Salt Lake City was interesting. After the Ogden turn-off, we spent some time running a long series of 50 MPH (or so they were marked) sweepers through a canyon and then came into a small town (which doesn't seem to have a name) where a number of hot air balloons were either flying or getting ready to take off. I wondered, given the remoteness of most of the countryside and lack of roads, how the chase crews could follow the balloons. Then we went through another very pretty and twisty canyon after a steep and winding descent and came out in SLC. We fueled on the other side of town by the airport. 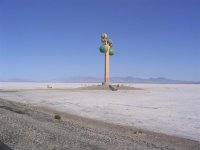 It was actually pleasant crossing the salt flats today. The temperature was still reasonable (26C) and the wind was moderate. While still about thirty miles from the Nevada border, we again saw the Tree of Life, aka the Tree of Utah, come into view. There are signs saying Emergency Stopping Only, but I needed a picture so I declared an emergency and stopped. It is an unusual thing and I appreciate seeing it in contrast to the stark whiteness of all the salt.

As we entered Wendover, I think I figured out the wages of sin. It appears that sin begets prosperity. East Wendover, in Utah, is a simple place without much to recommend it. As you cross into Nevada, marked by a line painted on the street, fancy casinos, restaurants and hotels abound. There is even one casino built with its east wall right on the state line.

We continued on I-80 to Elko, a little town with a big casino that we stayed in two years ago. Unfortunately, they were doing major paving work and the first exit was blocked. We pulled into the second one to get some lunch and I got a liberal coating of tar on my tires which attracted every small rock we drove over. At Mickey D's, we met a Pennsylvania HD rider who was on his way home after a month on the road.

Nevada must be pretty flush. They were repaving large stretches for the next fifty miles. I didn't know there were that many orange barrels in the world. I was passed by a tricked out Harley V-Rod and (the first I have really seen) a Titan. This is a rare custom built motorcycle. In the next rest area, we met a truck driver from Winnipeg and his female partner from BC. He was on I-80 for the first time hauling a load to Sacramento. We talked highways and border crossings until it was time to roll again.

We stopped for gas in Winnemucca, another small town in the middle of nowhere. Now is a good time to mention the community of the road. As we traverse the country, we encounter the same people and vehicles going the same way. I mentioned earlier the Iowa Nomad rider and the lady at breakfast in North Platte. At the Winnemucca gas station, I pulled in beside a semi hauling a High Definition TV production trailer. This rig was very distinctive and passed us twice two days ago in Nebraska. I mentioned this to the driver, who looked at the bike and said he remembered us. He wondered if I had a child on the back but I told him it was my wife. Sandy was pleased about the comment. He was going to lay over at the Flying J truck stop in Lodi since he didn't have to have the trailer in Sacramento until Tuesday.

The rest of the way to Reno got hotter. As we entered the 40 Mile Desert, the temperature was pushing 100 degrees. We stopped at a barren rest area and though about the settlers facing this brutal crossing all those years ago. They were some tough folk.

After pushing the rest of the way, we stopped in Sparks on the east side of Reno. We found the Fairfield Inn was booked but had just had a cancellation, so we literally got the last room at the inn. While we cleaned up, I called Paul 'Slots' Manske and told him we were in town. Paul and his wife Katie came and picked us up and took us to the Outback Steakhouse for dinner and conversation. We had a very pleasant evening. Thanks to both of you for looking after us. Don Inamasu called to let me know tomorrow's dinner plans.

I didn't get any pictures of Slots since my digital camera has stopped working. Actually, it still takes pictures but the little video screen quit so I have no idea what the settings are. If it doesn't come back, I may have to get a new one.

Back at the hotel, we were showing Katie the Wing and I decided to check the tire wear. The tread had worn a bit today in the heat, but the unpleasant discovery was a phillips head screw stuck right through the centre of the tread on the rear tire. I guess the experiment to see how far it will go is over. Slots said there is a big Honda dealer a few miles away, so I'll drop by there tomorrow and see if they have a tire they can install. Since the gauge says it isn't losing air, I'll leave the screw alone and won't try to plug it. I'll call Don as soon as I know what can be done. I hope this doesn't mess up the dinner plans.

On the plus side, if I have new rubber I won't have to keep my speed down any more:-)

I was just outside and can't believe how pleasant the weather is. Temperature and humidity are about as perfect as I could ask for. Small moments like this make up for some of the less welcome things that life visits on us.
Posted by Jim "Skid" Robinson on 7/14/2006