It was Sandy's birthday today.


It promised to be another scorcher in Stockton today with the expected temperatures well over 100. Don said we were going to the Monterey Peninsula and we should expect fog and chilly, so we packed jackets and headed out. 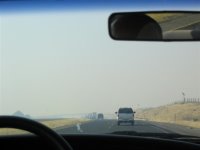 We took I-5 south in moderate traffic, Don at the wheel of the trusty Toyota. As we neared Santa Nella, where we would turn west towards the coast, it became obvious there was a fire nearby. I can see how these grass fires can burn since the entire countryside is dry, yellow grass and the wind blows constantly. The smoke started to obscure our vision, as you can see in the photo, and Don worried about possible road closures.

We stopped at Mickey D's in Santa Nella for a quick breakfast and a 'washroom' break. Don makes fun of some of our Canadianisms. Then it was west past the San Luis Reservoir and up into Pacheco Pass, where there were actually trees and rocks. There were also no exits or other roads, so this is a fairly remote area. The smoke dissipated as we went up hill.

When the expressway ended, we drove south on SR 156 towards Hollister. On the way, we passed the Corbin factory where high quality after-market motorcycle seats and other accessories are produced. Hollister was the town where a motorcycle gathering in 1947 gave rise to a sensational Life Magazine spread and was subsequently the model for the movie, The Wild One. It was, essentially, the birthplace of the modern motorcycle gang mythos. Bikers have been coming to Hollister on Independence Day Weekend for years. Citing municipal costs, the city fathers cancelled the rally for 2006 but the bikers came anyway. 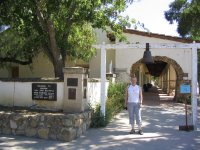 Leaving Hollister, we crossed the Calaveras Fault, part of the San Andreas fault system. There was nothing to mark the spot. Not far west, we came to the small town of San Juan Bautista. The mission here dates from 1797 and was the 15th mission built in the California mission chain. Some scenes in the Hitchcock film Vertigo were set at the mission. Driving around the quiet little town, I could feel a sense of the history and the people who had lived here.

While Don and I were talking, I discovered that he had actually met Grace Hopper, one of the legendary computer pioneers. She was an officer in the US Navy and is credited with developing the COBOL programming language and was probably the source of the term 'bug' as it relates to computers. Don has one of her 'nanoseconds', a piece of wire just under a foot long showing how far light travels in a nanosecond. She used these to illustrate why satellite communication had delays.

We continued west, passing a sign for Salinas and the line from the song Me and Bobby McGee, written by Kris Kristofferson and made famous by Janis Joplin, popped into my head. 'Somewhere near Salinas, Lord, I let her slip away.....'. This is one of my favourite songs, as anyone who has heard me attempt to sing it around campfires can attest.

We arrived at the coast, passing Fort Ord, and entered the Monterey Peninsula. We passed the gate into the private community of Pebble Beach, saying we were going to visit Don's friends, the Chinn's. Gaynor and Momi own a home in the DelMonte Forest portion of Pebble Beach that they recently renovated. Don was surprised to find a new home going up behind their property. 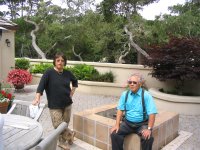 Gaynor wasn't home, but Momi welcomed us with open arms. She is the kind of person you can meet and feel like you have known her forever. The home is gorgeous. Here, Momi and Don are on the terrace at the back of the house, with some of the unusual trees in the background. The homes here are all in the several million dollar range, with the values going up as you get closer to the water.

Momi took us on a tour of Pebble Beach. This is a mecca for upscale golfers and some of the most famous courses in the world reside in this relatively small space. Spanish Bay, Spyglass, Poppy Hills, the famous Pebble Beach and the infamous Cypress Point. 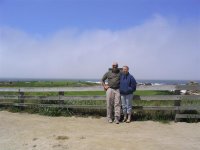 Sandy and I stand on the back nine of the Monterey Peninsula Country Club, a private course which Momi and Gaynor belong to, with the Pacific Ocean in the background. 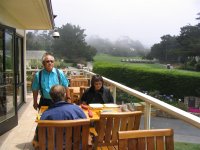 Don, Sandy and Momi sit down for lunch on the deck at the restaurant overlooking the 1st tee at the Pebble Beach Golf Links. It looks like they were waiting for a shotgun start scramble and we watched a deer grazing just off the tee. The food was good and Momi won the argument over the check. Thank you Momi for a memorable lunch. 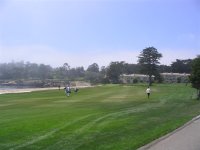 After lunch, we walked along the path that parallels the 18th fairway. I have seen this hole played countless times over the years on television. It runs along an ocean bluff and is one of the most famous spots in the golf world. 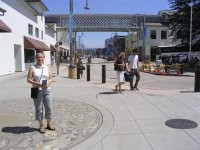 We returned to Momi's to get the passes to the Monterey Bay Aquarium where the Chinn's are members. After trying to give us directions, Momi decided to go with us. The aquarium was awesome. We didn't spend a lot of time looking in detail, but we got a good flavour of the excellent quality of the facility. On the way out, Sandy posed at the end of the original Cannery Row, made famous by John Steinbeck. We did some shopping in the stores before returning to the house.
A word here about dogs. Momi has a French bulldog that goes by the name of Meemer (as near as 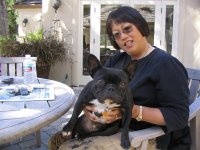 I can spell it). Meemer was a bundle of energy and kept me entertained for the longest time. She also has a snuffling sound that would drown out Wiliedog's two Boston terriers. It's so nice to see a dog with real character. Here Momi is holding her trying to get her to stay still long enough for me to get a picture.
We had iced tea and watched the end of The Wild One (fitting considering where we had been) before leaving the magical world on our return trip to the reality. The weather was warm and clear all day so, contrary to Don's warning, jackets weren't needed. Both Don and Momi assured us this was unusual. Since Don told us the same thing yesterday, I'm starting to wonder about this whole cool coast thing.
Many thanks to Momi for the hospitality and making what would have been an ordinary tour extra special. 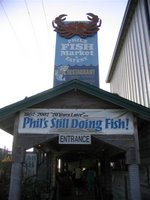 On the way back, we followed the coast a little farther north to Moss Landing. We were hoping to grab a bite to eat at Phil's Fish Market and Eatery. Unfortunately, it was bluegrass night with a band playing away and so many people in the place that it would have taken way more time than we had. We settled for a walk around the market part checking out the fish and seafood. Then we got back in the car and headed up the coast and back inland.
On the way past Watsonville, we started through the hills on a twisty road behind a Jessup transport truck. Initially worried about being held up, we were amazed at the way the driver handled his rig in the curves and hills. For a while, a jeep following us was unable to keep up. 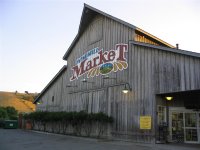 We went back through San Juan Bautista and stopped at the Windmill Market. Faced with a selection of Mexican deli choices, Sandy only wanted a hot dog. Don persuaded me to try a torta. This is a sandwich on special bread with onion, avocado, jalapenos and meat. I took ham and the sandwich was delicious. I washed it down with lemonade and then we got a pineapple jelly roll that we split to celebrate Sandy's birthday.
We got home late and turned in not long after.
Posted by Jim "Skid" Robinson on 7/17/2006