Bawating Collegiate and Vocational School is located on the Second Line in Sault Ste. Marie, Ontario. It was founded in 1961 and I had the pleasure of attending from the fall of 1967 until the fall of 1970. This should have been the spring of 1971, but I had a falling out with formal education in the first two months of Grade 13 and went to work for Inco in Sudbury. I had planned to go back the following year, but stayed with Inco for thirty years and retired young.

Bawating alumni decided it was time for a reunion in this, the 45th year. I became aware of it last year but thought it was going to be held in October. Recently, I discovered it was scheduled, instead, for the Canada Day Weekend. Unfortunately, I had already registered for the French Connection Rally in the Ottawa Valley. I still haven't got the 'two places at once' thing figured out.

As we were heading for the Black Hills, I got thinking about the reunion. Mom told me Del Weber, a French teacher I had, was inquiring about my address to send me a reunion package. I'm flattered he thought about me after all these years. I looked up the reunion website and saw I was past the cutoff date for registration so I called Mom and got Del's number. I phoned him from Custer and he graciously volunteered to head over to the school and register me. He even put up the fees, trusting soul that he is.

We got home from the trip on Tuesday and headed for the Soo on Friday. I stopped on the way in and picked up the registration package at the host hotel. Everything was a la carte, so I had just chosen the Sunday brunch and the Saturday afternoon at the school. Looks like I should have added the Friday wine and cheese social since that seemed to be a busy event. 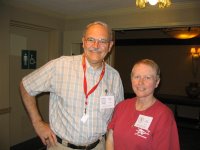 We ran into Del at the hotel Friday night. Here's a picture of him and Sandy. I did pay him back. He looks like he has weathered the years well. The school looks just the same. I signed the board, visited the old music room and wandered the halls. Didn't find anyone from my class but did see Dave McMillan, the second on the curling team I viced, that came within one rock of winning the Northern Ontario final and going to the national championship. The team that beat us won the national. At least there was someone there to reminisce with about our one great moment. I also saw Claudio Bertolli, who had been a young Italian teacher back then. I used to work out percentage grades for him on my slide rule in return for beer. He hasn't changed either. Although nobody from my class was there, I did meet some new people.

Mike Carlson, a contemporary of my brothers' and a former neighbor, was there Friday and Saturday so we spent time catching up.

Sunday brunch was a little late so I got talking to some of the committee people. We sat with Mike and his two young daughters when the food came out. There was a good selection and I enjoyed it. Del showed up near the end and I spent more time talking to the organizers. Seems I may have gotten myself on the committee for the 50th. Same old, same old.

We stayed over Sunday night and came back Monday. It was a good weekend but it was disappointing not more of the 70/71 crowd wasn't there. Thinking back, if I hadn't heard from a friend, I would never have known it was going on so we need to sepnd the next five years tracking people down. Sounds like a hobby to me:-)
Posted by Jim "Skid" Robinson on 7/03/2006