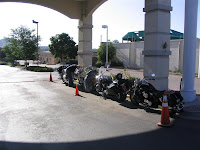 Here's a picture of our preferred motorcycle parking area at the Econolodge. First order of business today was to go to Rocky Mountain Cycle Plaza so Gary could pick up his new Tourmaster boots. I had the address in Stella and she tried to take us there via I-25 and Bijou Street. As usual, nothing went according to plan. The Bijou Street bridge over I-25 was closed. After a bit of wandering, she figured out how to take us to another bridge. Then she took us directly to the shop. The amount of road and building construction in The Springs is unbelievable.

Rocky Mountain is a large facility selling Honda, Yamaha, Suzuki, Kawasaki, Victory and a few other brands. Gary got the boots, although he needed one size larger than he thought. We looked at other stuff but all we bought were a couple of feet to go under our sidestands. I left my last one in the Lazy River Campground in New Hampshire. 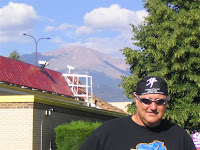 We debated whether we should head for Garden of the Gods or take the cog railway to the top of Pike’s Peak. You can see the 14,110 foot summit behind Terry. He wasn’t keen on trying the auto road because of the last five miles of dirt, which would have dictated an extended cleaning session. We decided that it would be better to get to the railway. Stella took us right there and, although the car lot was full, they had a nice, close place for bikes.

We were there in time for the 10:40 departure, but the train was full. We got standby tickets for the 12:00 train and settled in to wait. Just before the 10:40 left, Sandy went down to the ladies room by the train and heard someone call her name. There on the train was our friend Stewey from Peoria. He was also headed for Eric’s BBQ later today. We shouted and waved and then he left us. 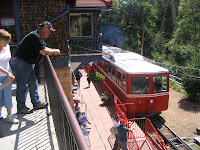 The waiting was OK. We talked to some other tourists and relaxed in the shade. About ten minutes before noon, they started calling standby numbers and ours came up. We climbed aboard the last car and got ourselves seated. At 12:00, the train moved out on time. Mel the friendly conductor gave us a running commentary on the train, the mountain and the history, This is the highest of three cog railways in the US. It gets its name from the gear that pulls the train up via the toothed section in the middle of the track. 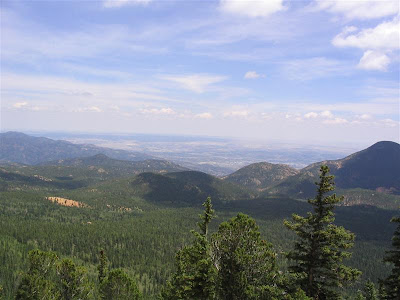 Looking out from the train towards Colorado Springs 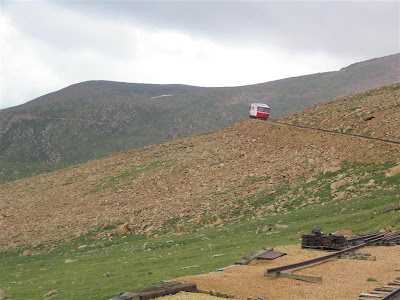 The first train ascending above the tree line 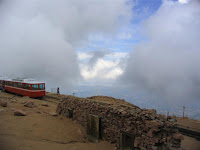 The clouds set in just before we got to the summit, one hour and ten minutes after leaving the station.. It was in the low 40’s, not uncomfortable to me but others were chilly. We got coffee or hot chocolate and wandered around. Looking at things and people. There was a slight break in the clouds and we did manage to see some of the vista. At 2:00 PM sharp, the train departed back down the mountain. We arrived at the station at 3:10.

We headed back to the hotel and I called Stewey, who was staying a couple of blocks away at the Days Inn. We decided that he would come over and we’d leave for Eric’s BBQ about 4:00 PM. It was easy to get to his place with the help of Stella, who didn’t trip over and moved streets this time. 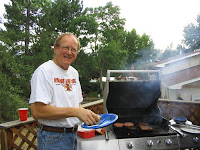 We were the first arrivals after a friend of Mary’s. There was a steady stream of arrivals after that, local area VROCers and some travelers. We knew some of the local people and met some new ones as well. Mark’Cheap Bastard’ Hicks of Slapout Alabama was there and Ed Wing, who led me to the original V2K gathering in Durango in 2000. Eric broke out the food and started grilling burgers, brats and dogs. It was a very nice start to WWR week. Thank you Eric.

Sandy was tired and Terry was leaving for home early in the morning, so we headed back to the hotel. Actually, I headed back twice because I had to go back to Eric’s and get my forgotten sunglasses. We were in bed by 9:00, party animals that we are.