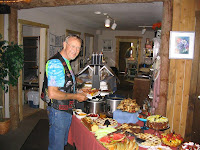 After two mornings at Sally's Fat Cat Cafe, most of the VROC gang had heard that it was the place to be. The difference today was that Sally has a buffet on Saturdays and Sundays. Here Sherm is checking out the dessert table. I'm really going to miss this place when we leave tomorrow. Sally and her gang have hospitality down to a fine art and, the next time I'm in Colorado, I'll make a special visit to Grand Lake just to eat here. 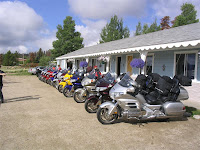 After breakfast, we hustled back to the Bluebird because we had set 9:00 AM as the time for the Tupperware Brigade group photo. Someone asked me why "Tupperware" and I had to tell her that they are plastic bikes. We had eleven Honda GL1800 GoldWings and one Honda SilverWing in the lineup. 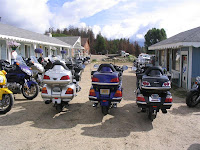 To add insult to injury, three of the GoldWings are carrying VROC plates on their Wings. Sherm was first in Oregon, we were second in Ontario and now Brillo has the Iowa plate. Kawasaki should take note that they are missing the boat in the touring market, but then even if they did decide to go ahead with a bike to compete with the Wing it would be difficult to compete with the established reputation Honda has developed. 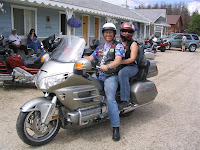 I have a feeling that there may be still more Tupperware down the road. Malachi and Corvette took this one out for a test ride and seemed to be impressed. I'm not sure why Mal is in the front seat, though, since Yvette does a fine job piloting her own drifter. 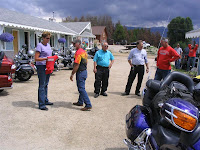 You can see the weather didn't improve much today. The storms were hit or miss, as they have been since we got here. After the photo shoot, we went down to the coffee shop to get on line. Then Sherm decided that he would like clear skies Sunday and announced he would be leaving shortly after noon. A group of us, consisting of Brillo & Deb, Willlie Wonka and Carlene and Sandy and I decided to accompany him the first 45 miles to Kremling. We were joined by Jeff Goodall, who we haven't seen in some time, and his friend Troy.

The ride through Byers Canyon was sporting for Sherm as we saw him pass some slow movers and flow away from us. Willie and I were at the back and didn't get quite the same run. In Kremling, we bade Sherm farewell after he got pictures of us in front of a building with a huge Vote Libertarian sign painted on the side. We'll be seeing Sherm, hopefully for an extended period together, in September so it really was only Au Revoir.

I lead the ride back to the Bluebird. Jeff and Troy, trying to catch up by a pass, almost got picked off by a State Trooper who turned on his roof lights after he passed me (luckily I was in slowed down by another car). I think it was a warning to them but he never turned around. When we got back, they said Grand Lake had been hit with a storm that included heavy rain and hail but the roads were dry by the time we got back. Looks like my luck is holding.

Stewey had led a ride out that I wanted to do, but Sandy said we had enough riding ahead of us. They went south over Berthout Pass and then up over Loveland Pass. Those of us remaining at the Bluebird did more visiting and I adjusted my cruising pegs and took a short nap. Group rides were coming back in when someone raised the question of supper. I suggested to a few that we go back to the Bear's Den for something light. By the time it was over, we had the banquet room filled. Instead of our pretty blond Romanian server, we got her brother but she did show up after to help.

I was talking to a local Harley rider out on the deck. We were talking about the roads, the weather (he was snowmobiling Memorial Day Weekend) and the countryside. He said it was a good thing we missed the hail storm on Wednesday. I informed him that if he heard about four bikes caught on the side of the road, it was us.

There was one crisis as I arrived at the restaurant. I went to turn Stella on to show Stewey some features and she wouldn't start. Nothing, nada, zip. Dead Zumo. Back at the motel, I tried everything in the manual to get it reset but the screen stayed blank. Then I tried a trick I heard about on Zumoforums.com. I borrowed an allen key from Gary and pulled the battery out. After reinstalling it, I held my breath and pushed the on button. She was back. I would be able to find my way home.

The rest of the evening was a little sad as people were saying goodbye. After years of doing this, we have developed a perspective that we realize that this is only a temporary parting. As Harry Chapin said in Circle:

It seems like I've been here before
I can't remember when
But I have this funny feeling
That we'll all be together again.
No straight lines make up my life
And all my roads have bends
There's no clear-cut beginnings
And so far no dead-ends.

I usually say "We'll see you down the road".