Gary and Norm woke up way too early this morning. It seems somebody set their alarm clock on Eastern Standard Time. For some reason, they blamed us. I can’t imagine why.

The plan today was to take some back roads across Nebraska and arrive in Colorado Springs tomorrow. Terry was also supposed to leave us today and head home. However, over breakfast, we worked on him and he said that he would stick with us if we could make it to Colorado Springs today. OK, it was no problem to scrap the four optional meandering routes I had programmed into Stella and tell her to take us to The Springs the fastest way. The route was now down I-29 to Omaha and across Nebraska on I-80. Our normal high speed commute.

It was near 80 and cloudy when we set out. The radar showed storms northeast of us sliding down to cross our path. As we ran southeast towards Omaha, we were headed right into it. Luckily, we turned west on 680 and 80 just before it got serious. Around Lincoln, the skies cleared.

The speed limit on I-80 is 75 MPH. I used to think traffic really moved along here, but I set the cruise at 85, according to the GPS, and nobody passed us at that speed across the entire state of Nebraska. Norm amazed us by the way he held in at that speed with the heat in the 90’s and a headwind. Without a windshield, he fits the definition of Tough Guy. 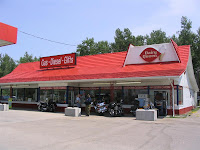 We rolled by the landmarks. The Kearney Arch, the old car museum and the military vehicle display went by in short order. At one point, Terry went onto his reserve fuel tank and I asked Stella to find gas. She said it was 25 miles until the next station, which wasn’t good so I cut the speed back to improve our mileage. Within a few miles we came to the exit to Brady and found a little old gas station and a Dairy Queen. Gas, food and friendly service. This worked well for us.

Past Ogallala, we turned on I-76 and entered Colorado. The road was down to one lane for many miles as they rebuilt the other side. It was inconvenient, but the road needed it. Near Sterling, we passed a grass fire. With nobody watching or fighting it, we didn’t know if it was controlled or wild. On this stretch, the temperature reached 38C or 101F. 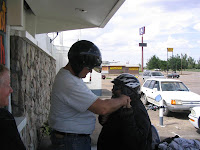 In Brush, we stopped for gas and a cool drink. Terry had to help Norm get dressed before we headed on. Then we continued on towards Denver. Stella told us to take E470 south around downtown Denver. She didn’t tell me it was a toll road. Four booths, costing a total of $9.75. The strange thing was that, except for the Interstate connections, it cost $0.75 (exact change) to get off at an exit. Finally we made it to I-25 and found traffic backed up. After a mile of crawling, we got past the spot where the police Hummer had the left lane blocked due to an accident. Then we picked up speed and found this to be the fastest traffic of the whole day. At one gas stop, we talked to a couple from Texas on a GL1800. He was wearing a Leakey T-shirt.

In Colorado Springs, Stella told me our Nevada Street exit was on the right. So did the sign. Imagine my surprise when the new exit went by on the right. I said some bad words and got off at Garden of the Gods Avenue. Good thing we missed Nevada Street. The whole street has been condemned. We ended up at an Econolodge on GotG that had a pool and a WORKING HOT TUB. Megan, the desk clerk, let us park under the awning at the front door and they put orange traffic cones around the bikes. The WiFi worked too. After over 700 miles, this was a good place to be.

Terry, Sandy and I hit the hot tub and pool and then we went next door to the Tam O’Shanter Irish Pub for food and some drinks. Glen, the young bartender, had several Lynchburg glasses for drink Jack Daniels and a coke chaser, so I had one. The glass was actually plastic, unlike mine, and I told him plastic would be good on the road, so he gave me one. Before we left, I convinced him that he was a libertarian.