The final day. It was clear again and still warm. Also more humid than the last few days.

We loaded up and headed up US 151 to where it met US 41, then cruised right through Oshkosh and Green Bay rush hours with little difficulty. I kept it at a steady 9 over. After Escanaba, we stopped in Manistique, Michigan for lunch at Arby's and set our watches ahead for the final time. Then it was on to the border.

There was little traffic this time on the International Bridge. The very pretty border guard asked where we lived, how long we had been away and the value of what we had bought. When I said $2.00 (the side stand foot Gary paid for), she welcomed us home and let us go without checking ID. Norm took longer because he was talking with her about sidearm training and several other non-typical things. I would have like to have stopped and seen Mom, but it was after 5:00 PM and we were pushing daylight. 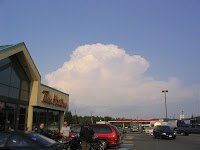 There was a flagman holding up traffic as we left town. The ambient air temperature gauge was reading 36C when we got moving, the hottest we saw on the return trip. Yikes. We carved traffic all down the north shore. A planned coffee stop in Blind River (named by Neil Young in Long May You Run) was scuttled because the Country Style was closed. As we approached Espanola, the one cell of the day, a pop-up, loomed on the horizon directly in our path. Maybe our luck had run out? 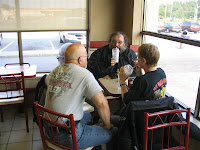 We stopped at Espanola for Timmy's Iced Cappucino. Since we would be splitting up when we got towards town, this was really the official ending to the trip. We closed it out the way we started it, in a Tim Horton's. Fitting. As Norm and Gary fueled, Sandy pointed out that this was another successful group ride in that we all seemed to still like each other. Normie continued to amaze me riding that Drifter with no windshield.

We hauled in the last 40 miles sparing no horses. Twenty miles from town, we went through an area where you could smell that it had just rained but, other than a few drops after that, we stayed dry. Normie peeled of on 144 and Gary left us downtown. We arrived in the driveway at 8:00 PM on the nose and Stella said we had covered 6,153.0 kilometers. Time and miles well spent seeing old friends, making new ones and putting faces to names.

August will be slow. There is the Freedom Rally here this weekend and then Interlochen later in the month. Other than that, there may be some local rides but this is usually the month we take it pretty easy before heading back out in September.
Posted by Jim "Skid" Robinson on 7/31/2007