I mentioned before that the Freedom Riders wanted more club ride activities. The ride to Manitoulin Island today was my attempt to give them what they were looking for. The sky was partly cloudy and it was a little cool at 15C, but generally it was a good day for a ride. 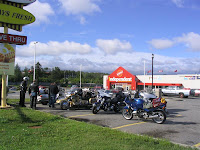 The riders were to meet at Tim Horton's in Lively at 9:00 AM. A few were a little late, but we got underway at 9:30 with five bikes. Gord and Shirley and Dan and Gloria were on their Harleys, Leo was on his Beemer, Tom was on his Goldwing/sidecar outfit and we had ol' Quicksilver. I was a little disappointed at the turnout, but it was a good crew and we'll keep working at it. 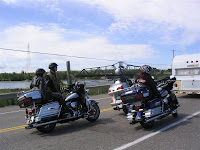 I led the group out RR 55, the old Hwy 7 and hooked up with 17 at Whitefish. Then it was on to Espanola and Highway 6. We stopped at the Tim's on the south side for a moment so some could fuel and make a comfort stop. Then it was down 6 over some really nice road to Little Current, the gateway to The Island. When we got there, the gateway was closed. There is a swing bridge onto The Island that opens hourly to let boats pass under. In the picture, you can see we're waiting for the bridge to swing back. 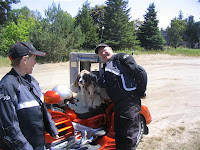 Once the bridge closed and we were across, we stopped at a fish and chips stand so Tom could buy some smoked whitefish. Then Stella took us to Mindemoya and on to Providence Bay where Gord got us to the waterfront. There we met a couple of Islanders on a Wing and Wing trike that we knew from our rally. The trike has a really different dog carrier on it. Here Leo is hanging out with the dog. 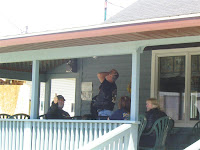 From Providence Bay, Gord led us back to Mindemoya and on to Sandfield and back to Highway 6, where we turned north and headed for Manitouwaning for lunch. It seems The Island isn't up to date in the Garmin database because, when we turned into Manitouwaning, we disappeared from the map. I know I was on a street but Stella said I was off road. The restaurant we were looking for was closed, but the Musky Widow was there and we settled in on the deck for some nice food. 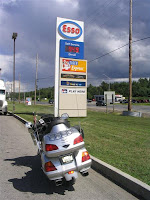 Back on the map again, we rode back to Little Current. The bridge was open again, so we waited for it to close before we headed back up to Espanola. There was a big, black cloud hanging ahead of us, but we slid behind it and only caught a few raindrops as we went through town. We fueled up and you can see from the sign that the prices were very good. Since we would be heading our separate ways as we approached Sudbury, we all said goodbye here. Although we would be Colorado bound next weekend, Gord said he would organize a ride next Sunday. Then we hit the road, cranked up the pace and skirted some other showers on our way back to the city.
Posted by Jim "Skid" Robinson on 7/15/2007