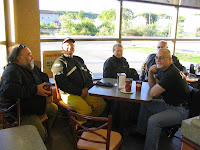 Sandy and I were up at 4:30 AM this morning. The weather was clear and the temperature was 10C. I would call it a good morning to ride. All our gear was in the bike by the time Leo showed up at 6:05. We arrived at the Tim Horton's meeting point at 6:40 and the whole crew was there well before the 7:00 departure time. From the left, we have Norm, Leo, Sandy, Terry and Gary.

We hit the road at 7:00 AM sharp. Gary led and held a pace at about 120 KPH. About 25 miles out of town, we met two OPP cruisers headed the other way with the lights on. This let us know that we wouldn't be encountering any police until well past Espanola so we kept up the pace.

We made a fast comfort stop in Espanola and continued on. Outside Spanish, as we were moving into a passing lane to overtake some slow traffic, I caught sight of a new black and white cruiser as it went by us the other way. He didn't seem interested in us despite the pace we were moving. One nice think about a bike is that, if you are close to any larger vehicles, you won't register on radar. On the way to the Soo, we passed a large number of bikes headed east. We tried to think of some event that they would be headed to or from, but nothing occurred to us. 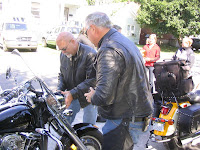 In the Soo, Gary needed to drop off a piece of sound equipment with Shirley of the band Spyder's Web. Stubborn Stella took us right to the house. While there, Gary and Terry set about fixing a loose headlight on Gary's 2000 cc Vulcan. He had been hearing a strange noise since we left Sudbury and, after looking all around, this was what the culprit turned out to be. Then we headed to a nearby Tim Horton's where the gang and Shirley had coffee while Sandy and I made a quick visit to see Mom. My brother Rabbi had just arrived from Edmonton so we got in a bonus visit. 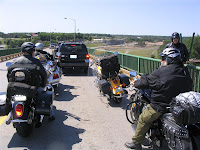 After reconnecting with the group, we headed over the International Bridge. Traffic was backed up because there were several trucks lined up for their booth, extending onto the two lane bridge and the cars couldn't get by. So the auto booths were empty and, as you can see, we waited. Silly system. When we finally did get to a booth, the Border guy was very chatty. We spent time talking about Colorado since were headed there and his son lived there.

Finally over the bridge, I led down I-75 and across M28 to Newberry. I kept the speed reasonable since I am familiar with the State Police in this area. While we were stopped at McDonalds in Newberry, a trooper pulled in behind a Honda ST1300. I talked to the rider afterwards and found he had been clocked at 76 in a 55. The trooper knocked that down to 60, but it still cost him $80. The same speed only cost us $30 back in 1988. I took it easy as we turned south on M117 and, before long, we passed the same officer who had stopped another northbound vehicle.

From 117, we headed west on US 2 to Escanaba and the west on US 8 towards Wisconsin. I was surprised that when we crossed into Central Time Zone Stella didn't change automatically. She knows everything about where we are and I thought this would be automatic. Maybe I don't have her set right.

We passed quickly through Vulcan, Michigan. I should have stopped for a photo but we were through there and into Norway in a flash. In Rhinelander, Wisconsin, Stella took us right through downtown. Not sure why we got the scenic tour but there are some things I still need to figure out about how to operate this. Forty miles later, she did put us right into the hotel parking lot in Prentice (pop. 676). We saw our only deer of the day just before we turned off. 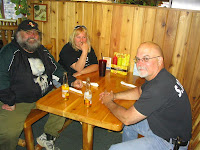 There was an A model Vulcan already there. It was Sue, who is also known as Cobber's Mom. She travelled the 50 miles down from Minoqua to say Hi after reading my post on where we would be staying. Sue accompanied us across the road to the Boondock Bar & Grill for supper. That's her in the photo with Norm and Gary. A rose between two thorns.

After supper, Sue headed back home. It isn't wise to ride after dark here because of all the deer. I was going to get on line, but it seems the motel WiFi access point was only configured for 802.11G. Gary got on fine but my older 802.11B wasn't able to find it. No big deal because we went to bed quite early.
Posted by Jim "Skid" Robinson on 7/21/2007