We were awake at 5:00, up at 6:00 and riding by 7:00. It was clear but rain was showing in the radar coming over Minneapolis moving southeast. I took the lead and we went west on 8 for a while before turning south heading for Eau Claire. We lost Norm briefly in one town when he got sun block in his eyes.

I had entered SR 178 from Cornell to Chippewa Falls because it looked like it wound down by a river. This was a good choice and if you are ever in the area, consider giving this a try. Then Stella took us through Eau Claire at street level. I'll be more careful in looking for by-passes in the future. We finally got out of town and followed SR 85 to Waubasha where we crossed Ol' Miss and entered Minnesota. 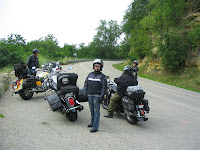 SR 60 from the border to SR 20 was another winner. Thirty MPH corners and good pavement gave us an excellent ride. The photo was taken at a scenic lookout over the Mississippi Valley. Then it turned ugly as it straightened out and it looked like someone had repossessed some of the pavement. We stopped at a new A&W in Fairibault (they pronounce it Fariboe, the correct way). A sport bike rider told me that getting caught going over 100 MPH in Minnesota will now give you an automatic six month licence suspension. OK, I now have an upper limit.

We continued on 60 to Worthington where Stella took us all through town because I had set it as a waypoint and the official town location was off our beaten path. Another nuance to be aware of. I'm learning all kinds of things with this unit. Then we were southbound into Iowa where 60 turned ugly again. Luckily, we were soon on new four lane road. Unfortunately, it had been relocated and Stella had fits because she though we were travelling through cornfields. 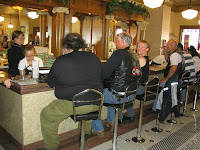 With temperatures in the mid-90's we stopped at LeMars at the Blue Bunny Ice Cream Parlour. Le Mars claims to be the ice cream capital of the world. You can see the crew bellied up to the ice cream bar ordering various sundae concoctions.

From Le Mars, we made the short hop to Sioux City. On the way, we passed a Harley rider on a bike with ape hanger (high rise) handlebars. I guess he didn't like being passed because he speeded up and wouldn't let Norm in. Then he passed us and made a gesture. I chose to ignore him, which was good because several of us wanted to go after him. Nothing to be gained as far as I was concerned.

In Sioux City, we found a Comfort Inn for a reasonable rate. They had a pool but the hot tub was out of service. All of us except Norm hit the pool. Then Norm and Terry went out to a Chinese buffet while Gary, Sandy and I ordered Domino's Pizza. The WiFi was working, but I didn't get time to get the Blogs updated before bed time.
Posted by Jim "Skid" Robinson on 7/22/2007