At the Club meeting last weekend, several members had complained that there weren't enough riding activities going on. I suggested we meet this Wednesday evening and maybe go for a ride. We also planned a ride to Manitoulin Island next Sunday. 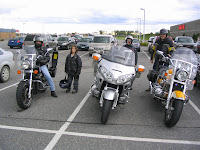 The meet was set for Tim Hortons on Lorne Street (not the usual bike meeting place, the other one) at 7:00 PM. We ended up with three bikes. Terry Appleby (president), Henri Belanger and young Zack, and Sandy and me. Terry noted that it was Wings Night at 2 Thumbs Up in Chelmsford. Henri wasn't into the food, but he rode out to Chelmsford with us. The photo shows the happy riders just before Henri headed home and we went in to eat.

After some good wings, we rode back to Sudbury and did a tour of downtown before heading out The Kingsway and up Barrydowne Road. From there, we headed home our separate ways.

I hope that we can generate some more interest in upcoming rides. At the very least, we will keep them going so that members won't complain that there is nothing to do.
Posted by Jim "Skid" Robinson on 7/11/2007