Cambridge to Port Dover and Back via Burlington

We followed 24 south to Brantford and let the GPS (now known as Stubborn Stella) take us through town to CR 5. Heather was keeping up just fine on the Rebel. We fell in with a gathering line of bikes on the same mission as we were. When we reached Dover, there was a Road Closed sign and we all turned onto a side street. That was a mistake because it dead ended and we had about 20 bikes making U-turns. Seems the Road Closed sign was for cars and we were supposed to go around it. Who knew? I usually come in on Highway 6. We came up onto Main Street via Chapman. 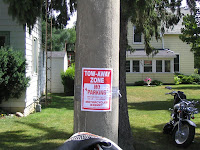 At Chapman and Main Streets, there were some porta-potties and we saw Dave and Donna Rogers, sidecarists from the Waterloo area. We barely had time to say hello when the traffic started moving again. Bikes ahead of us turned left towards downtown but I looked at the number of bikes and people and realized that would be futile. We turned right and proceeded up the street, which was closed to cars and had bikes parked on the left, right and in the middle. Note the "Motorcycles Exempt" note on the No Parking signs. 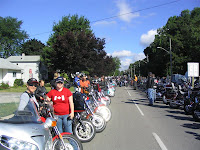 There was parking on the other side and we made a U-turn at an intersection and came back to claim our spaces. At this point, we were over 1/2 mile from downtown. Here, Heather and Sandy are beside the bikes after was locked all the riding gear in our saddlebags and trunk. This is looking away from the busy end of town, believe it or not.

We walked towards downtown in a gathering mass of people. On the first block of Main, we saw some friends from the Waterloo Wings sitting on camp chairs in front of their bikes. Ed told me they arrived about 6:30 AM to get those spots. 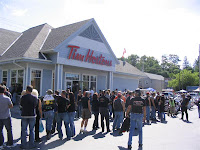 Heather wanted to borrow some money to buy a shirt, but I was low on funds. We found an ATM at the main intersection and I wrestled with it a bit before getting $100 out of it. Kitty corner from the ATM was the Tim Horton's. This was the line of people waiting to get in for coffee. On the other side, there was a similar line of people using the Walk-Thru window. This is normally a Drive-Thru, but not today. We went across the road to a hot dog place and got some food and orange juice. We shared a picnic table with some guys wearing Thunder in the Valley T-shirts from Johnstown Pa. You may remember we rode through there with Ron and Laurie on the first day of that rally last month. 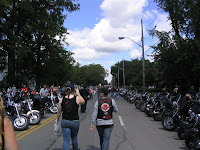 We wandered back up the street towards the bike. It was even hard to do this because of the crowds. If one person stopped to look at something or take a picture, 75 people ground to a halt behind them. By the time we crossed Chapman, this had eased quite a bit. Back at the bikes, we suited up and then came towards town a block before we could get turned to head out to the west. On problem with the Wing was that, coming up behind people walking, they couldn't hear us. I didn't want to hit the quite loud Wing horn, so I waited patiently to be noticed. The loud cruiser pipe people didn't have this problem.

Leaving town about noon, we headed out a ways before catching a road north and then back east on CR 3. Between there and Hwy 6, the police were controlling all access to town. Cars weren't allowed in and bikes were lined up. On 6, we passed lines at Jarvis and Hagersville. That one, because of the traffic light, was backed up about 5 km's. I have no idea where these bikes would fit in town. Next time, we'll plan to arrive about 6:00 AM. 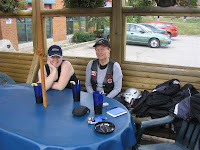 We stopped for a bite in Hamilton and then took streets (to avoid the 403/QEW) over to J&J's Cookhouse (formerly Shoeless Joe's) in Burlington. Jimmy, the owner, is a friend of Shelby's and VROC has been going here after Port Dover for a few years. We were the only ones who had arrived so far, but Jimmy greeted us and seated us on the patio. We had cold drinks and then some food. After an hour and a half, we figured maybe no one else was coming when Dave 'Rudeboy' Rood, his wife Sabrina, brother Matthew and friend Anthony pulled in. Dave has an 800 sidecar outfit and Matthew has a sharp little 800 bobber. They ate and we swapped stories until just before 5:00 when we got the bills, settled up and got ready to leave. As I was ready to pull out, I heard someone call my name. It was Walt 'Maxxx' Hayward. Had just enough time to say hello. I heard later that others showed up after. I guess next time we will need an official meeting time.

Stella took us on an interesting tour back home. All back roads through some places I never imagined existing. In one short stretch, Heather was harassed by an impatient and aggressive young woman driver in a minivan. On my own, I would have dealt with this girl but with a novice rider, staying out of the way was my main concern. We got back to Cambridge OK. Heather's rear brake, a drum, was squeaking so it looks like we have something that needs fixing.

We left the bikes at Heather's apartment and took her car over to Tom's. He had just picked up a Wii computer game, the one with the controllers that detect motion. We tried their demo games, bowling, golf, baseball, tennis and (very aerobic) boxing. Then Sandy and I took Heather's car back to Cambridge and slept at her apartment.
Posted by Jim "Skid" Robinson on 7/13/2007