WWR Colorado Trip Day 6 - So This Is Grand Lake

We were up at 5:30 and, as we were wiping the bike down, Sherm got some cleaner out to remove the blue ink from the inadvertent pen explosion. It came off just fine. The weatherman said that, after five weeks of perfect weekends, the trend was coming to an end and we could expect thunderstorms for the next few days. 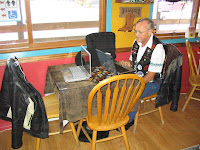 Since we had to change hotels, we loaded the bikes up and headed to town where we heard there was a WiFi café. Sure enough, once we got through the first part of Grand Lake and got to the very pretty four block downtown, there it was. You can see that Sherm settled right in. Downtown Grand Lake looks very much like Jasper Alberta in my opinion. 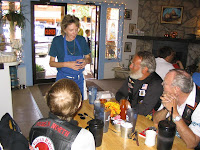 Jim Ayers came in and said that the campground owner recommended the Fat Cat Café for breakfast so we moved down a couple of blocks and went in to see. The proprietor, a lady named Sally who came here from Lincolnshire, England twenty years ago, set a new standard for hospitality. In the picture, Sally is discussing breakfast with Jim, Sherm and Sandy. She creates many of her own recipes and they are excellent.

Back up at the Bluebird, people were starting to roll in from all over. After many greetings, we decided to go for a little ride. Sandy and I, Sherm, Jim Ayers, Bucky, Borys from Thunder Bay, Cheap Bastard and Mal and Yvette from Rifle Colorado set out south for a little hop. We fueled in Granby and then headed west on US 40 past Hot Sulphur Springs. As you leave the Springs, the road makes a left turn that ever seems to end and then proceeds to wind through a pretty little canyon carved by the Colorado River. The Mighty Colorado is pretty small way up here and you’d never suspect that this is what carved the Grand Canyon.

We had no traffic and ran a moderately quick pace through here with me leading, Sherm following and CB hard on our heels, pretty impressive considering he was on a Nomad. At the end of the canyon, we stopped and Sherm and I switched bikes for the return trip. He led and was off like a shot. There were several slow vehicles and we passed them in the short straights. After the run, Stella told me Sherm’s top speed was 95.5 MPH. I was very impressed with his tires. They are the same as mine except a stickier compound. I’d have them except that the price you pay for grip is longevity and I wouldn’t be able to afford to keep myself in rubber. Choices, choices.

Back in Granby, we stopped and switched back. Sherm says this little ride probably cost him $2,500 because he really liked the handling of the Traxxion and figures that he has to have it. 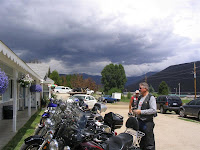 Back at the Bluebird, there were still more new arrivals. This is where the Kaw Pasture, AKA Reunion Headquarters, is located. You can see that the weather was changing. Mal told me that, in Colorado, if you don’t like the weather just wait five minutes. Rain hit shortly after this was taken.

About 5:30, we started to wander down to Pancho & Lefty’s restaurant in small groups. Eventually, we had about half the tables occupied by VROC. They had live entertainment but it pretty bad. Sandy and I skipped Mexican for chicken tenders and a hamburger, which were quite good. We had eight people at our table and they automatically added an 18% gratuity so we made sure to leave the exact amount of the bill The server would have made out better without doing this. It was also just one ticket, so Cathy from Greeley and I spent time working out who owed what. 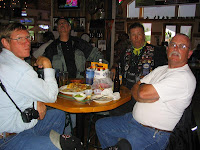 At another table, I caught Chuck (PNW), Stockbridge Richard and Six Pack Jack from Georgia and Grumpa (PNW) in the midst of experiencing Pancho and Lefty’s. By the way, for those who are not Willie Nelson fans, the place is named after a song. 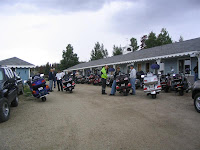 On the way out of town, we saw our long lost roommates Willie Wonka and the lovely Carlene. They rode their Wing in from Illinois. They followed us back to the Bird. The lot was full when we got there and we spent the rest of the evening watching a brilliant display of lightning on the horizon and mingling. Willie and I were about the last to turn in at midnight.

One note on the bikes. We had almost 15 Wings here, which show that VROC riding tastes are changing even while the socializing tastes remain the same. The Tupperware Brigade is growing rapidly and this should signal to Kawasaki that they are losing business by not having a full touring bike in their line-up.
Posted by Jim "Skid" Robinson on 7/26/2007