Sandy and I were up at 5:30 AM. The Weather Channel said it was already 72F and the radar was clear. By 6:15, we were packed and had our free continental breakfast. By 7:00, I had done my tire checks, the last one in our group was finally up and we were ready to go. After a farewell to Stewey, saying we would see him in Arkansas in September, we headed east on I-80.

After some discussion last night, we decided that we would forgo the pleasure of riding through Chicago and Gary Indiana and would come up the west side of Lake Michigan instead. I told Stella that we wanted to go through Escanaba, Michigan to force this route and told her we wanted the fastest way. One problem with the GPS is that, while you always know where the next turn is, you are never quite sure where you are.

It turns out that Stella plotted a route across Iowa that I would never have picked on the map. I think we turned off I-80 onto I-380 towards Cedar Rapids and then caught US 151, a fine four lane road leading to Dubuque, Iowa. The countryside was beautiful, the traffic was light and the towns were mostly bypassed. 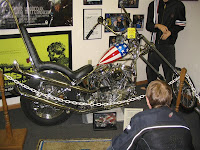 On the serendipity note, as we approached the town of Anamosa, Iowa, there were billboards advertising the National Motorcycle Museum. What a pleasant surprise. We just had to stop. Anamosa is a very quaint little town and the museum is right downtown. We got there at noon, just as the tornado sirens were being tested. I wonder what would happen if a real tornado arrived at noon? In picture one, Sandy is examining one of the original Captain America bikes from the movie Easy Rider. They also had replicas of Billy's bike and the one Fonda used in Wild Angels. 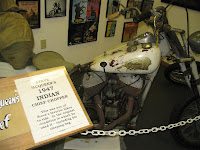 One of my favourites was this Indian. You can see that Steve McQueen wasn't a fan of washing bikes, either. The museum was well laid out with different sections. There was a great selection of Vincents, Indians and Harleys as well as many key Japanese bikes. In the racing section I actually saw a Flying Merkel. The amazing Ariel Square Four was there along with too many other legendary scoots to list. In addition, there were many other motorcycle related memorabilia items. The place was well worth the $7.00 admission and I expect to be back sometime when I have more time to wander. 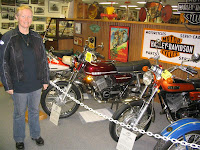 Two items, side by side, did especially catch my eye. On the left is a 1974 RD-350 Yamaha identical to the one Sandy and her first husband, Brian, had. On the right, in orange and black, is a 1972 R5 350 Yamaha. My first bike was a 1970 R5 in fuchsia and white. Yes, fuchsia. I had a matching helmet, shirt and socks. Real men were tough in those days. It was really nice to find these pieces of our personal history in there.

When we tore ourselves away from the museum, we went across the road to Tucker's Tavern for lunch. Then, about 2:00 PM, we headed for Dubuque following Stella's directions. As it was on the way out, some of the road was so new that she thought we were back in the cornfields again. And what cornfields they were. Following the countours of the land, the corn rows and other lower crops followed seemingly random geometric patterns. This is so much more interesting than the dull old square fields.

We went through Dubuque and across the Mississippi River into Wisconsin. As the T-shirt said, smell the dairy air. We arrived in Madison at rush hour where our route consisted of a series of busy interchanges. I don't know where we went, but Stella gave me lots of warning as to which lane to be in each time and what road to take. I am developing some confidence in how this works and I like it. 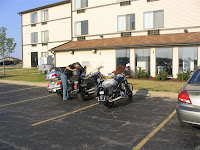 With less than 600 miles to go, we knocked off for the night at an exit for Columbus, Wisconsin. There was a Culver's Frozen Custard and a Super 8. In the photo, Gary checks that the bikes are tucked in for the night. We walked over to the Columbus Restaurant for supper and then Normie accompanied Sandy and I to the Culver's where he watched us eat Caramel Cashew Sundaes.

Back at the hotel, the WiFi worked fine so I got some things done. I checked NASCAR and Mom, relegated to 2nd place last race by Fox, got ticked and scored what I think is a record 402 points. She is back in first with a bullet.

I've decided that the paper notebook, in additional to being susceptible to getting wet, is too cumbersome. The thoughts I have when riding usually escape my poor old noggin before I can write them down at the next stop. I'm going to get an electronic voice recorder to capture my ramblings as they occur to me. This may or may not be an improvement.