WWR Colorado Trip Day 7 - Around Grand Lake and Beyond

If you take a look at the post immediately below this, you can see pictures of some of the people who were wandering around today.

We were up by 6:00 AM and I spent the early time sorting some photos and getting some blog typed. Some days I have no time at all to get this done and I am currently about three days behind, but I do like to look back later on and see where I have been. 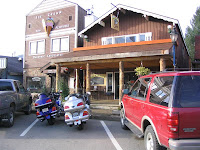 By 7:15, we had wiped the Colorado dew off the bikes and a few of us (Wonka, Carlene, Sherm, Normie and Biker) had settled in at the Fat Cat. Sally was busy baking but she did stop by to say hello. Sherm had Scotch eggs, which weren't on the menu but Sally had told us about them the day before. The girl serving us said that Sally's Hot Sauce wasn't for sale, but Sally gave Sherm a bottle when he mentioned how much he liked it.


After breakfast, we adjourned to the coffee shop to get Email and post whatever we had available. Got a note from Terry that he covered the 1,800 miles home in two days with one ticket. He didn't say how much over the limit. Then we headed back to the Bluebird where we saw clouds to the north, south and east. While others headed out for rides, we hung around, visited and typed some more blog entries. At noon, a truck showed up with a large awning, tables and chairs that Bucky had ordered from somewhere. We got them all set up quite quickly, although the 8,800 foot altitude of the Bird does slow one down a bit. 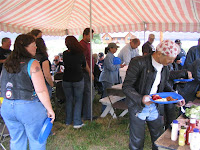 The riders wandered back in as the day went on, many wet and a few lucky ones dry. Bucky took Slammer and his little truck to pick up food she had ordered. The way she pulls all this together makes me think of loaves and fishes. Here she surveys the result of all her handiwork.

Right after supper, Slammer got a call from Toby. Their group had gone north through the National Park and then east and south. They were down on I-70 and a bike had gone down injuring the rider's ankle. The plan was that Slammer would hook the trailer he hauled out up to his SUV and drive the 50 or so miles over Berthoud Pass to get rider and bike. Sherm and I volunteered to go and help. Then the mission changed. Further calls revealed the bike wasn't damaged so we were going to take a rental car belonging to Rubbergator (Lisa) from PNW and we'd ride the bike back. I'd already volunteered so I couldn't back out now.

I drove the car with Slammer and Sherm south through Winter Park. Soon after we headed out, the rain started. Winding up through Berthoud, the rain continued and the temperature dropped. We passed Tobey and the gang on our way to the top as they tried to make the most of the dying light. They looked miserable and I wondered what I had gotten myself into as we crested the summit at 46F. Then it was down through more rain to I-70 where we found the Conoco station the bike and rider were at one exit down.

It turns out the casualty was Greg from Grande Prairie, Alberta. His ankle had been checked by EMT's who thought it was only badly sprained and he had it wrapped and iced. Lisa was also there and they all got Greg into the car while I suited up and fired up his 2005 1600 Nomad. I haven't ridden a Nad in three years, so it felt a little strange as we started out in the wet and, by now, almost dark. The levers weren't in the right spot for me, nor were the windshield and suspension. The levers would have been an easy fix if I had the presence of mind to check them before we set out, but I was stuck with the others. 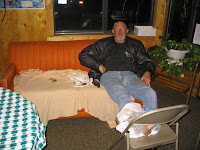 A funny thing happened over the pass, though. While it rained all the way to the summit, it wasn't as intense as it had been. At the top, it stopped and just left me to contend with wet pavement on the downgrade hairpins. The long drops off the side didn't even bother me, although most did have guard rails. In Winter Park, where we stopped and I adjusted the levers, the roads dried and it warmed up so the rest of the ride back was quite enjoyable. The earlier gang had stayed wet almost all the way back, so I really caught a break from the weather gods. You can see Greg back at the public room at the Bluebird resting the ankle.