WWR Colorado Trip Day 5 - A Hail of a Day

Terry was up at 3:30. Because he had left his watch on the bike and we had no alarm, he guessed it was morning so he had a shower and got ready to head for home. He was surprised when he realized how early it was, but figured it would be a good start to a long day. He was on the road at 4:00 AM.

I stayed up and worked on some Blog entries. It’s very easy to get behind on these, as any of my readers is well aware. At 6:00 AM, we went down for breakfast. I went out to check the tires on the bike and two things happened. The liquid ink pen I carried in the fairing virtually exploded when I uncapped it due to the low air pressure. I got ink on myself and on parts of the bike. It will clean off. I also met a couple riding a silver ’05 Wing like ours, headed to the GL1800riders.com gathering in Montrose California. We talked Wings for a while.

I got a call from Mary ‘Bucky’ Bucholtz, who had been late getting to Eric’s last night. She is the ramrod of WWR and also was the mover and shaker for the first VROC world gathering back in 2000. She now works for NASA in New Orleans. Bucky wanted to know if we wanted to ride to Grand Lake with her and I said sure. I called the Bluebird Motel to see if they could take us a day early and was surprised to find that they couldn’t, so I made a reservation at the neighboring Black Bear Lodge.

We had planned to leave at 10:00 AM but Mary arrived at 9:30. Shortly after, she led us out through Garden of the Gods to Highway 24 and took us through the first little canyon before letting me take the lead. She was on Eric’s ’00 Nomad and was just making friends with it. 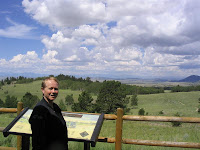 We rode up over Ute Pass and then up to Wilkerson Pass, which, at about 9,300 feet, is the gateway to South Park, which is behind Sandy in this photo. From there, we rode down a long straight road to a crossroads named Hartsell. 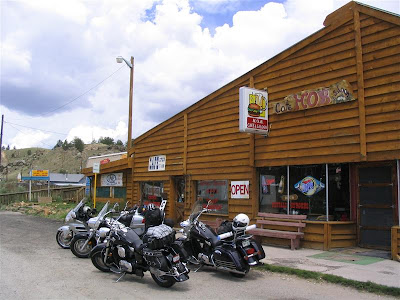 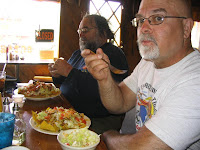 We had lunch at the HOB Café & Saloon. As you can see in the photo, the portions were generous but the water was rationed.

After lunch, we came out and looked up Highway 9, the way would be going. It looked pretty black. Another GL1800 pulled in with a couple from Illinois. This was their first long trip and we all put on rain gear together. They accompanied us through light showers skirting some nasty rain to Fairplay, where they stopped and we went on up 9.

In Alma, we got stopped because construction has the whole town reduced to one lane. Unfortunately, the rain also started again at this point. Rain on a bike while sitting still isn’t any fun. From there, we climbed Hoosier Pass. The road was nice, with sweepers as opposed to switchbacks. Over the summit, at 11,539 feet, we started down until a flagman stopped us. We spent about ten minutes there as the rain stopped, and then we continued to Breckenridge, a very upscale ski town. Gary said he could smell money. I missed a turn, but Stella got us right back on track. Shortly after, we ended up at Dillon on I-90.

This was decision time. We weighed our original plan of going up through Loveland Pass, which was under very black cloud, against continuing north on 9, which looked better. Some days, you just never know what the right choice is. We skirted another big rain cell as we rode north to Kremmling. There was some rain but we ran out of it fairly quickly. Things were looking good until we reached Kremmling and turned east on US 40. This is where this post title kicks in and we figure we probably decided wrong in Dillon.

As we headed east, there were two dark, scary cells ahead of us. It looked for a bit like we might be able to run between them, but it wasn’t to be. It started raining and, within a mile, we started getting hail. Not little friendly hailstones, but ones that were up to ½” that made an awful racket when they hit our helmets. I pulled over with absolutely no cover and we huddled their for about 20 minutes until they precipitation turned to solid rain. A trooper slowed, but Normie gave him the high sign and he continued on.

With us merely being heavily rained on, we got on our way. Mary rolled out first. There was a westbound bus honking at us, but we were already rolling. Within a half-mile we found out what he was trying to tell us. The road was covered with about 4” of hail, a fearsome sight. Mary continued on riding through a tire track left by a vehicle and I stayed with her since there was now nowhere to stop. This continued for about three miles, although it seemed like forever at the time. Then the road was only wet and we were only in a blinding downpour. It’s amazing how relativity works. We met a snowplow headed the other way to deal with the hail.

It rained to Granby and then eased as we headed north the last 16 miles to Black Bear Lodge, but the weather god wasn’t done with us. I was now leading as we ran into another severe downpour that eased just before the motel. 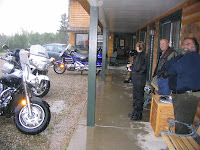 Sherm and Charlie (CC Rider) were waiting for us there. Moments after we got in, the deluge caught us. We got settled in our rooms and hung up our drenched gear. Sherm was sharing with us and the owner brought us a rollaway bed for him. Shortly after, Stewey and Cheap Bastard pulled in. They ran from Colorado Springs via Mount Evans and hardly got wet. I cut my hand opening Stewey’s beer bottle with my Buck Knife.

We went downtown to the Bear’s Den for supper. They put us in the banquet room and our server was a pretty Romanian girl who was over here for a vacation and working to pay for it. Bucky came in and gave everyone New Orleans beads. We didn’t even have to flash for them.

Back at the motel, we talked to a couple on a Suzuki Intruder from Illinois and then turned in. I think the lights were out about 9:15.
Posted by Jim "Skid" Robinson on 7/25/2007