One of the problems with going to bed before 9:00 PM is that you are likely to wake up at 4:00 AM. Which we did. Unable to get back to sleep, I got up and finished the blog post about our day at Castle Dome. During breakfast, we heard a clunk against the side of the RV. Investigation later proved it was a bird that mistook our side window for something less solid. 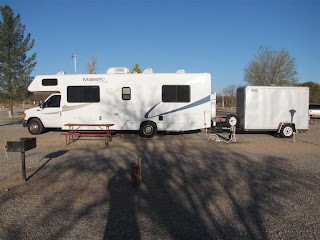 Our setup in Benson Arizona 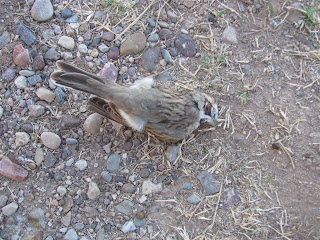 Unfortunate bird
I unloaded the Wing from the trailer and talked to Rich about his plans for the day. KT called to say they were on their way and I promised we wouldn't leave without them. They arrived in mid-morning and unloaded their excess gear, placing it in our trailer. Jim's original plan was to get a room for the night in Bisbee but thought it might be better to return to Benson. We offered them the fold out couch in the motor home, which they accepted.

We set out for a planned trip down Arizona 80 to Tombstone and Bisbee. The first stop was old Tombstone, about 25 miles south. We found parking spaces on the back street and locked our gear down. The first thing to come along was a stage coach (Butterfield perhaps?) giving tourists rides around town. The horses looked ample but not too fast. Wrong breed. 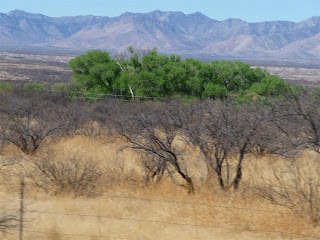 A patch of green on the way to Tombstone 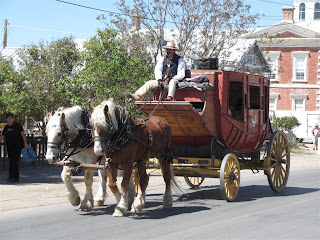 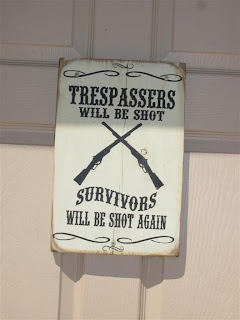 Is this warning clear enough?
Everyone knows that Tombstone is most famous for being the scene of the Gunfight at the OK Corral where three Earp brothers and Doc Holliday took on the Clanton/McLaury cowboy contingent. Our first stop was at the OK Corral where, for a fee, you can walk the grounds where the shooting took place and, for a slightly higher fee, see a re-enactment of the event. The ticket also included a presentation at the Historama, which (in the voice of the late Vincent Price) described the history of Tombstone. 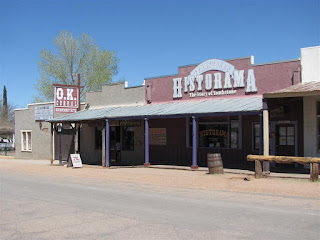 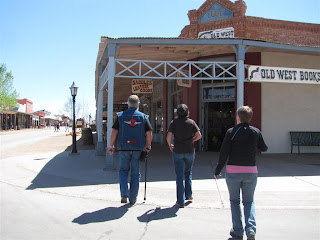 Dangerous characters walk the streets of Tombstone
While waiting for the next Historama presentation, the four of us wandered the streets. For some reason, we seemed to keep ending up looking at rings in the various jewelery shops (and there were a lot of them). In a few, we found ideal silver/turquoise bands that fit KT. In others, bands fit Wrong Turn. But nowhere did we find a pair that fit. 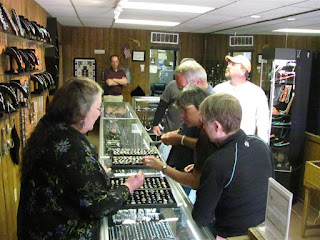 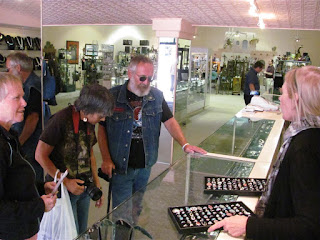 And another (of many)
I talked for a bit with a gentleman hawking the local tram rides. His name, I figured out later, was Richard Blake and he has played Abraham Lincoln in many different shows. I was able to track him down because he also told me he played the parole board chairman in the Nicolas Cage film Raising Arizona. He also played Honest Abe one more time in the Kevin Bacon film, The Big Picture. 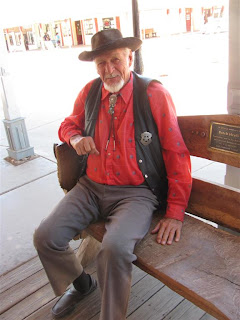 Actor Richard Blake
We made it back to the Historama and learned a brief history of Tombstone, its quick rise as a gold and silver mining town, its devastating fires and the closure of the mines due to groundwater flooding. Arizona was still a territory back then and the place was the personification of the "Wild West".

After the Historama, while waiting for the afternoon gunfight re-enactment, we scouted more jewelery stores. While in front of Big Nose Kate's Saloon (she was Doc Holliday's live-in friend), we saw a man photographing his young daughter (maybe ten years old) in front of the entrance. Another man in jeans and a green shirt asked the father if he was an "official photographer". Then he insisted they come inside so we followed to see what was up. We got a table and ordered cold (non-alcoholic) drinks while we watched the man in the green shirt get the young girl up on the bar and equipped her with a feather boa and six gun. Then he coached the father on the best angles to shoot the photo from. We figured this guy must be somebody. For his next victims, he picked Wrong Turn and I, posing us behind the bar with me holding the beer pump and WT holding a shotgun. I got talking to the man afterwards. His name was Steve and he owned Big Nose Kate's, The Longhorn Restaurant and a couple of other places. And he loved people. He came to Tombstone in 1961, an ex-GI from New York who the locals thought was Italian.  He got in a lot of fights. Then they found he was Jewish and he got in a lot more fights. But he hung in and is now quite a local character.

Our server said Steve was by far the best boss she ever worked for. By the way, our lady was quite well endowed and, when she leaned forward to wipe off our table, I couldn't help but notice that she was carrying a Bic lighter in her cleavage. 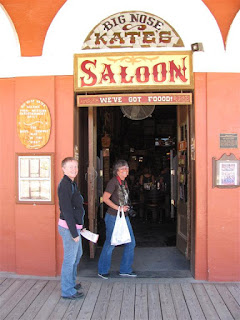 Some ladies plying their trade outside Big Nose Kate's Saloon 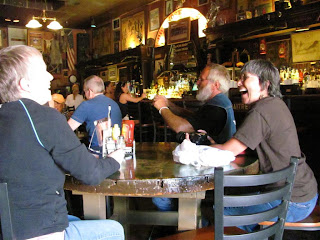 A jovial mood in the saloon 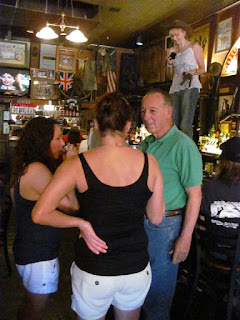 The man in the green shirt interacting with customers 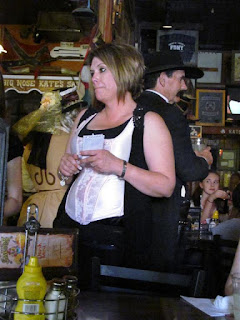 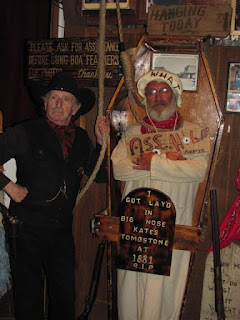 WT gets his comeuppance 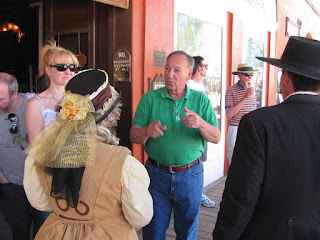 Steve finds another victim
We left Kate's in time to head for the OK Corral re-enactment. As we all lined up at the doors to the gunfight set, the Frank McLaury character laid down the rules. Funny enough, he looked a lot like Charlie Sheen but made more sense. The re-enactment was a bit corny but the actor playing Doc Holliday was brilliant. And Hattie Earp, step-daughter of James Earp, was part of the action. I never heard of Hattie before but it seems, after some research, that she may have been one of the causes of the bad blood between the factions. After opening with a Shakespearian soliloquy by Doc, the action progressed to the shootout which saw three men die in the street. 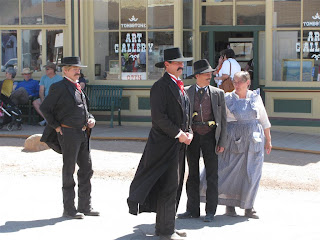 It looks like there is going to be trouble soon 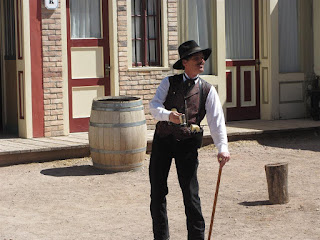 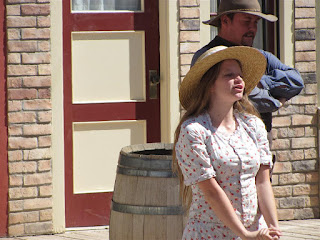 Hattie Earp was a real cutie
When the shooting was over, we wandered over to the blacksmith shop where the smith had earlier told me he did a few jobs for a man up in Cave Creek before he learned that the gentleman was the one and only Sonny Barger. 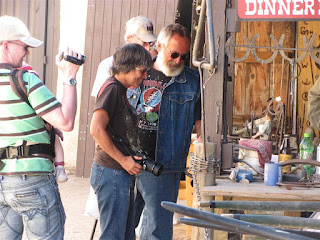 WT and KT looking at some of the blacksmith's items 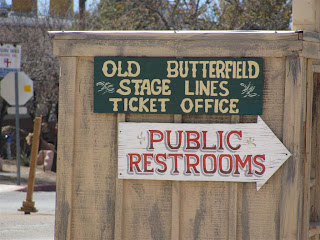 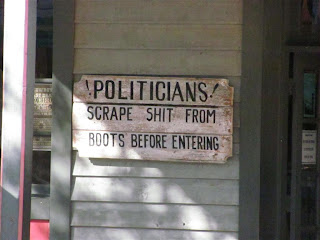 Good advice for politicians then and now 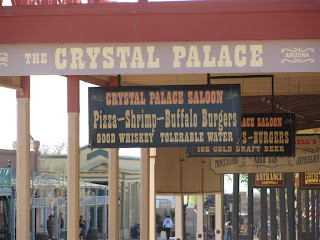 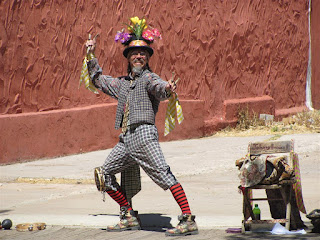 I gave the minstrel a buck
We felt the need for food and headed for the OK Cafe, only to find it closed. So we went back to Big Nose Kate's and had some good burgers and sandwiches. Then we went up the street and checked out the Bird Cage Theatre. We saw the bar back, brought around the Horn in 1881, and various bullet holes but didn't take the full tour. Sherm said that was a mistake. Next time. Then WT and KT decided they would buy one of the rings they had looked at. The catch was that we couldn't remember which store it was in. We wandered around like lost souls before they found the right one. Then we hit a clothing store and Sandy found a white shirt for Maggie Valley. The clothing store was once the Alhambra Saloon where Doc Holliday and Ike Clanton argued the night before the OK Corral shootout. 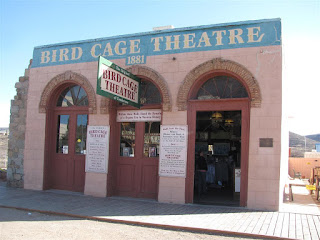 The Bird Cage Theatre (note the spelling)
The day was drawing to an end as they started to close up the shops. With the shadows getting long, we realized that Bisbee wasn't going to be in the cards for today, so we rode back to the campground. WT and I talked about many things and KT and Sandy did the same. Later in the evening, we heard some coyotes yipping away about something. Before too late, we all turned in for the night.