As we all woke up and got moving today, Tracy and Hannah made a fine breakfast of eggs, extra good bacon and toast for the assembled multitude. Given the way the bike was heating up a bit, I checked the coolant overflow tank level and found it dry. Luckily, Slick had some Kawasaki Alumacool coolant and distilled water so I topped it up. Les called to say he and Jackie would be joining us and showed up soon after.

While we were getting set, Einstein, his wife and his friend Ted arrived. Shortly after, Tony D rolled in on his durable Vulcan 800 and rounded out the group.

The line of bikes, Slick in the lead, headed up to US 60 and turned east towards Globe, where we had received word that Jack 4E and his wife Barb from Holbrook would try to meet us. Unfortunately, after Apache Junction, the traffic came to a screaming halt because the Renaissance Festival was in session. It looked like we would be stuck in this line for several miles and, although I added coolant, the Wing was starting to heat up. 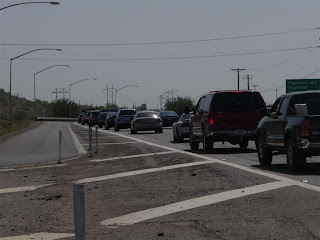 Traffic on US 60 heading for the Renaissance Festival

Finally, Slick reconsidered and we flipped over and headed west on 60 at the last interchange. Good thing because the Wing temperature gauge was just hitting the red. 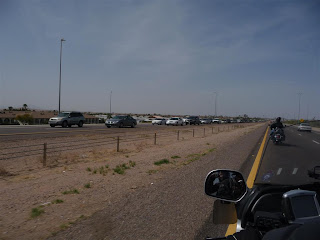 We exited at Ellsworth, right near Silveridge, and fueled while Sherm called the 4E's and told them we were reversing the route and would be much later getting to Globe. We headed north on the Usery Pass Road and turned on the Bush Highway where the only thing of interest was a collection of law enforcement vehicles attending a white PT Cruiser that had eaten the ditch. Arriving at Arizona 87, we started north on the four lane divided road. We went through a section of two lane construction and then opened it up on the other side. My GPS said my maximum speed was equal to my ideal body temperature. 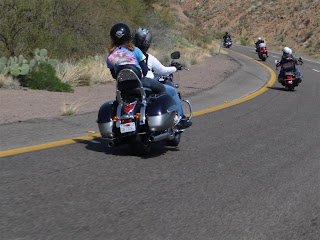 Heading up Arizona 87 at Warp 9 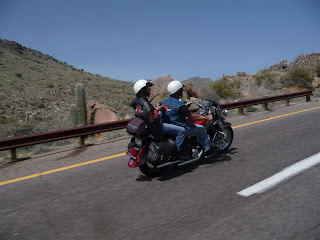 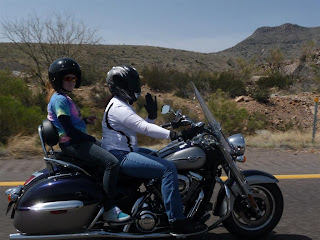 We went by the 188 turnoff and stopped a few miles up at a restaurant. It looked like it might have been nice once but it was now closed. We went back down 87 to 188 and went east to Jake's Corner, which was much busier than it had been a few days earlier. Unfortunately, Einstein and company had been behind us a ways on the 87 and didn't realize we hadn't turned onto 188 directly, so they were now ahead of us and trying hard to catch up. That is a plan that will never work out right. At Jake's, the fare today was hamburgers and hot dogs. Sandy had a hamburger and I had a cheeseburger. I also bought a DVD of the movie Jake's Corner. 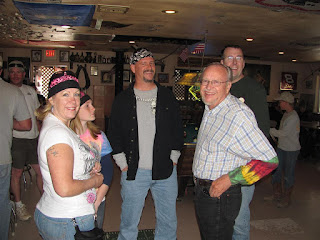 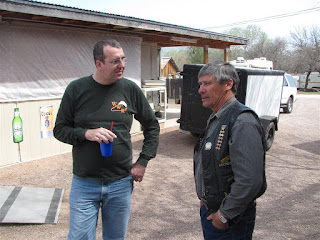 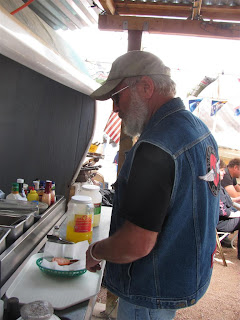 From Jake's, I led. A few miles up the road, we met two bikes and I recognized 4E's distinctive paint work. I was going to stop the group but Les radioed from the back and told me Sherm had stopped and now three bikes were catching up. The next nice place to stop was at the Roosevelt Dam, so I led us in there and we all got to exchange greetings. 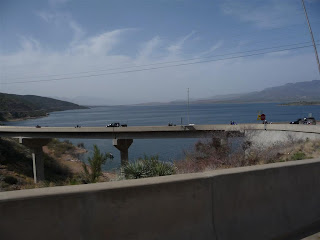 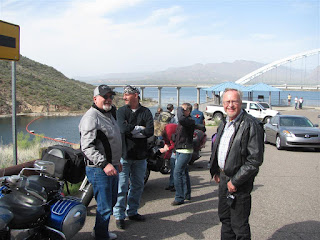 Leaving the dam, 4E led us to Globe where we stopped for fuel after a small amount of confusion on which gas station to use. Barb and Jack decided to stop in town there and have supper, saying they would see us later at the party. 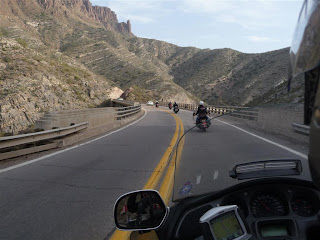 Tony D led us and we made one more stop at Superior, amid a mix of off-road and sport bikes before sailing on into the city. Passing the Renaissance Festival site, it looked like after a NASCAR race with all the vehicles trying to get out of there. I never knew it was that big a deal. Kudos to the DPS for setting up a traffic plan that merge them into our westbound lane almost seamlessly. Les and Jackie peeled of at Apache Junction while Tony headed home when we exited the 60.  We managed to get back to Slick and Tracy's right at 5:30.  It was interesting because I was familiar with all the roads today thanks to Les and Jackie having guided us around last week.

The party started as soon as the bikes were parked. Tony came back with his lady Andrea while Biglefti arrived soon after. I looked up at one point and found Mel from D&D Cyles had joined us. Jack and Barb arrived a while later.  Slick cooked great burgers and we had salads to match. Hannah decorated an excellent cake. Justin Bieber would be proud of her:-)

The gathering was mellow with a lot of stories swapped as a slide show of Slick and Tracy's ride played on the large screen TV. A fire was burning in the back yard and some adult beverages were consumed. This was the night of the super moon, a full moon at it's closest point to Earth. No one grew fangs, much to our disappointment. 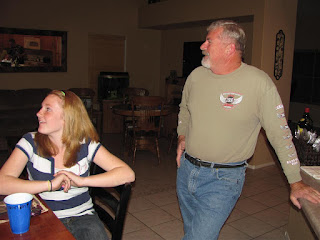 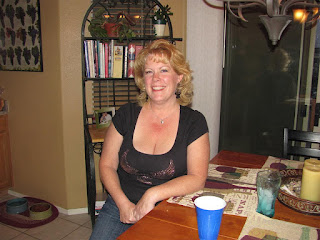 Tracy (a great photo if I do say so myself) 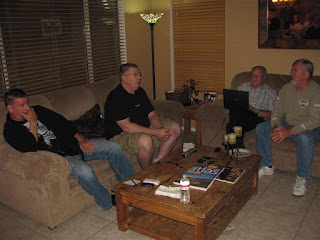 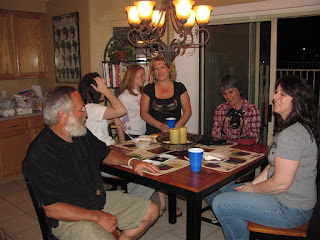 Friends gathered around the table

Tired from the ride, many of us turned in much earlier than usual but tired we were. It was good to see old friends and Slick and Tracy provided hospitality second to none. It was well worth restructuring our itinerary to be here.

Be sure to check out Sherm's photo blog of this great weekend.