We were up shortly after 6:00 AM which was easy since we were still pretty much operating on Eastern Time. It was cool but not too bad and I just wore sweat pants and a T-shirt over to the shower. I noticed when I was getting dressed that my jeans are looser. I don't have a scale but this can't be a bad thing.

My task this morning was to re-install the tire pressure monitoring system. The Tire Minder is a slick idea but the instructions are pretty arcane. I put the batteries back in the sensors and then installed them one by one. I had to redo the trailer sensors once before the low pressure warning light went out. The left front tire could use two more PSI but I will get that tomorrow morning.

We bid farewell to the couple from Gatineau and hit the road about 9:00 AM. I almost forgot to remove the 90 degree fitting from the city water inlet but noticed it in the mirror as I was getting ready to pull out. Approaching I-40, Tucumcari Mountain was in full view. 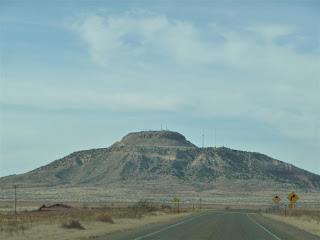 Tucumcari Mountain
We stopped on the west side of the town at a Flying J and filled the propane tank along with gassing up. This was the first propane fill and it looks like I didn't use much even running the furnace quite a bit. The fuel mileage yesterday into the strong headwinds at 60 MPH was 7.0 miles per US gallon. Understandable. Today, I am going to hike the speed to 65 MPH and see what happens.

The big story today was the grade, which was mostly up. We started out at about 4,000 feet above sea level and, although the terrain was flat for the first part of the day, it was tilted. 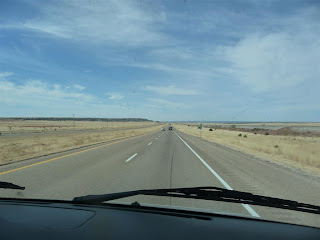 This is uphill, believe it or not
We passed by Santa Rosa, the place where, in 2005, I pulled the GoldWing in for fuel and realized my gas cap was back in Dalhart, Texas. Happy memories. Soon, we could see snow capped mountains off to the north. I scanned the radio frequencies and found NPR and a rap station but no Country and Western. What's up with that? Another characteristic I noted yesterday was the lack of merge lanes. You better be up to speed and hope people aren't passing each other when you head onto the Interstate. On the plus side, they decorate their overpasses. 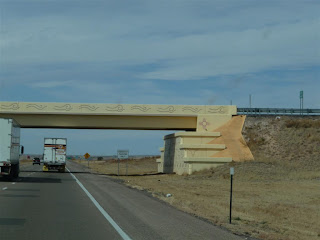 Overpass on I-40 in New Mexico
I have been finding I get very fatigued after a couple of hours driving in the morning. That and my tailbone hurts indicating I need a better seat cushion. Anyway, we saw signs for the Flying C Ranch. Lots of them. The headwinds were kicking up so I pulled in there for a break. The building is unassuming from the outside but the inside has huge amounts of tourist stuff for sale, including a stuffed buffalo. I just bought a coffee and phoned ahead for a reservation at the Gallup NM KOA. 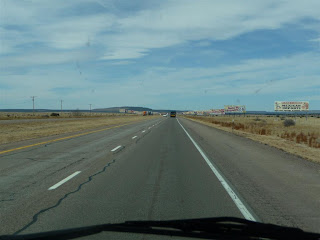 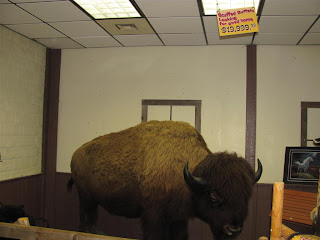 Stuffed buffalo for sale
We continued on (uphill, of course) into the teeth of a stiff headwind. I am finding that I have trouble telling uphill from downhill in this type of terrain and put the GPS on Elevation mode to keep track. Rather to confirm, because the ten cylinders under the hood let me know whether gravity was working for me or against me at any given time. 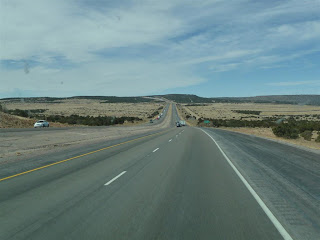 Believe it or not, this is still all uphill
There was a hard climb into some mountains where we hit a summit at just over 7,000 feet before descending 2,100 feet to and through Albuquerque. As you can see from Sandy's scenery shots, they really decorate the overpasses and abutments here. At the bottom, we stopped at a Flying J for lunch. The RV parking area had the shortest spots I have seen so far and some inconsiderate auto drivers chose to take up some of the RV spaces. We had more turkey and cheese sandwiches and yoghurt, which may be why my jeans are getting bigger.

Climbing out from the Flying J exit on 40 was a steep grade. I was able to maintain 45 MPH by keeping the transmission in 2nd (it is a 5 speed). We had to climb back up to the plateau. This motorhome must have been made by Rolls-Cunardli because it rolls down one side of a hill and Cunardli get up the other. The Banks Power System is looking better all the time because 420 foot/lbs of torque just ain't enough. I never noticed these grades much on the Wing.

The scenery west of Albuquerque is much more breathtaking. The red rock around Laguna is particularly memorable and Sandy got a photo of the old mission just outside town. I think Sherm had this on his blog years ago. 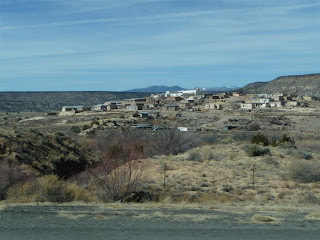 Mission at Laguna New Mexico
We saw signs stating that New Mexico was in the middle of a spring blitz against drunk drivers. Good for them.  The new lady governor, Susana Martinez,  looks cute too.

Through Grants, the black lava beds were quite evident. We kept climbing until we reached the Continental Divide at 7,280 feet according to Zumo. Then the winds started to get particularly nasty. I stopped for fuel at a Pilot truck stop about 15 miles before Gallup and met a man wearing an Abbotsford Allied Van shirt. I asked if that was BC. He said it was a company he worked for in Ottawa. Another person from home. The fuel fill-up showed that, despite the grades, higher speeds and headwinds, mileage today improved to 7.9 MP(US)G from 7.0 yesterday. I think the V-10 seems to be happy at 2,500 RPM (the 65 MPH engine speed).

We drove through Gallup to get to WalMart where we needed a few supplies and a bit of food. I forgot it was Saturday. Everyone goes to Wally World on Saturday. We got a parking space by the edge of the lot and bought our stuff. If the El Reno Oklahoma WalMart was 30% Native American, Gallup was 90%+. And hardly an African-American face to be seen. Back at the RV, a 5th wheel had pulled in with Quebec plates but the driver didn't speak English. I need to learn French so I can talk to the tourists down here.

Coming back onto I-40, the signs misled me and I found myself headed west. Luckily it wasn't the last exit in town and we were able to get off after only four miles. The idiot GPS brought me back at street level all the way through Historic Gallup on Old Route 66 but we finally arrived at the KOA. This place, associated with the adjacent La Quinta, has crushed stone sites except for the concrete pads for the picnic tables. 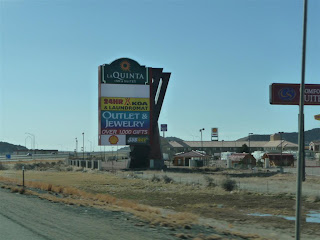 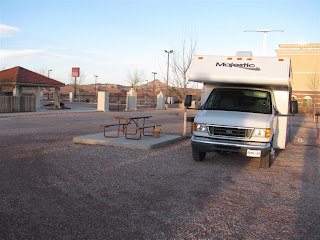 Our site
After hooking up, we were having supper when the mother of all motorhomes pulled in. it was a huge Prevost Coach (Canadian made) towing a three-axle enclosed trailer. The plates said Ontario. Go figure. 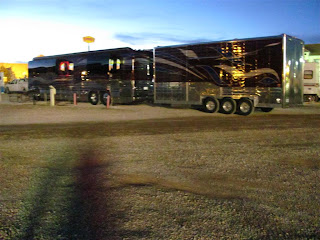 Mother of all motor coaches
Steve from New Hampshire sent me an Email suggesting I shut of the signal booster on the TV antenna when not in use to prolong the life of the house battery. Silly me, I didn't realize it had an off switch. Thanks, Steve.

I spent the evening posting train and scenery photos and writing this entry. The winds are starting to rock the coach so it may be an interesting night. I'll go to bed soon because the clocks spring ahead tonight and I need all the sleep I can get.