Weather.com said it was 27F this morning in Flagstaff but it didn't feel like it when I went outside wearing just sweat pants and a T-shirt. 7,000 feet of elevation makes it a little chilly but nothing froze. I spent some time sorting and recording the bills from the time we left home. Also, I am now awash in T-shirts. Forgetting I had left a complete supply of them in November, I packed a lot in the suitcase when we came back down. I stowed the gear and remembered the 90 degree fitting without any help.

We left at 8:30 and took a short jog on I-40 to catch I-17 South. There was snow on the side of the road. I saw the sign for 89A south through Oak Creek Canyon to Sedona. If we were riding the bike, I would be heading that way. 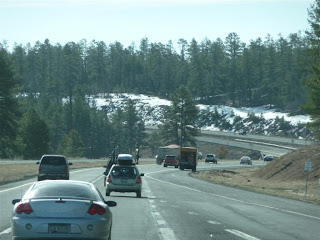 Snow south of Flagstaff Arizona
We stopped at Munds Park for fuel and found that we were back up to 8.4 MP(US)G yesterday. A young lady named Wiley was working the cash register. Unlike the truck stops, which don't charge your card when you prepay unless you skip, the regular stations charge the card for the prepay amount and then issue a credit when you settle up.

Driving on south, we started to descend. Quite rapidly, since this is the southwestern edge of the Colorado Plateau. We will be mostly downhill today and will descend the Mogollon Rim. 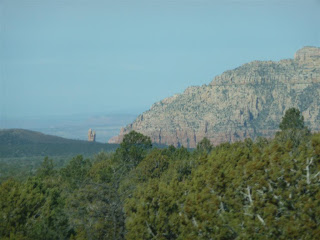 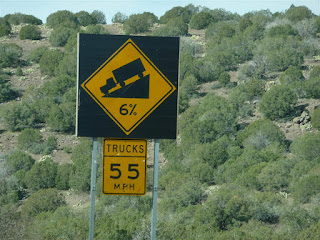 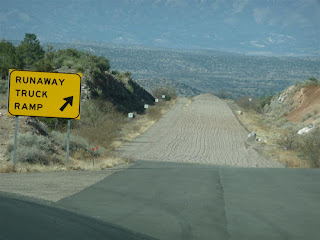 I never paid much attention to these before 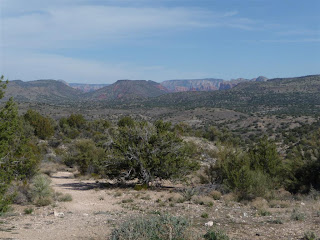 The Rim in the distance

The transmission in this Ford E-450 is pretty good. I engaged Tow-Haul mode as always, set the cruise on 55 MPH and never touched the brake. The transmission downshifted to the proper gear to maintain the speed on the grade. Granted, at some points the engine was turning 4,700 RPM but we got down safely.

We stopped at a very nice Rest Area at the bottom of the first grade. They had trees and cacti labeled so we tourists could have a clue what we were looking at. I called D&D to see about getting the bolts removed from the bike and found they were closed Mondays. 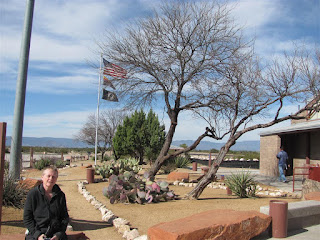 Sandy, a prickly pear cactus and a mesquite
Our descent from Flagstaff to Cottonwood was from 6,800 to 3,100 feet. Then, of course, we started back up but the geology was different. 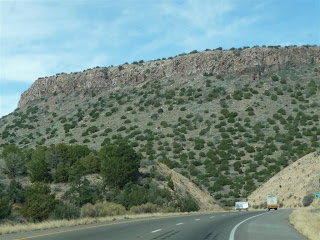 Climbing out of Cottonwood on I-17

On the last drop, we were suddenly surrounded by miles of the famous giant saguaro cacti. Now it felt like Arizona. 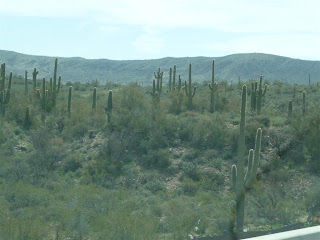 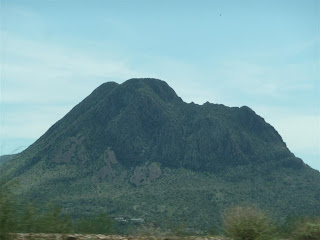 Mountains just rise up out of nowhere

On the flats, we approached Phoenix from the north. We wanted some provisions before getting to the RV park so I set the GPS to take us to a WalMart on Happy Valley Road, a just developing area on the north side of the city. A characteristic of the cities here is that all business signs are mandated to be low and unobtrusive. This one was so unobtrusive we never found the WalMart. It felt too much like Scottsdale, which I strongly dislike, so we continued to another store in Mesa where we got enough groceries to tide us over for a few days. Then we got fuel at a Circle K station (9.0 MPG on the downgrade) before proceeding to Silveridge, where our friend Norm from home was staying and had gotten us a site for four nights.

Pulling in to the fancy RV resort, Norm was waiting and helped us get registered at the very nice headquarters building before guiding us to our site. We couldn't keep the trailer here, so we unloaded the bike and new neighbor Les, a GoldWing rider from Swift Current Saskatchewan with a large 5th wheel toy hauler, hooked up the trailer to his truck so we could move it to a nearby storage location. Then a Silveridge staff member helped us get parked and we took the trailer to storage. This was a bit challenging since the office manager didn't think they had any free storage spots, but we prevailed. It was hot by our standards but the locals consider this winter. 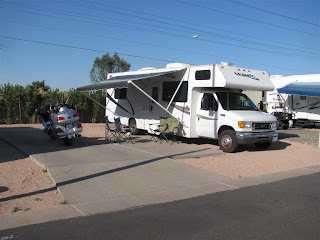 Our site in Mesa 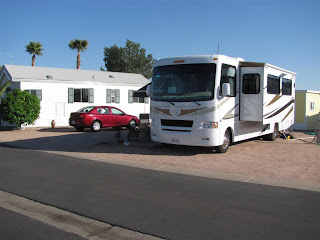 Leo and Diane, along with his cousin Ron and Ron's wife Elli, are staying about 18 miles south of here in Queen Creek for the month, but would be leaving tomorrow for a few days driving up to Flagstaff via 89A to see the Grand Canyon. We knew Ron from our time at Inco. I called them and we took the bike for its first run of the year to see them. The bike tire pressures were just right as unloaded, and I fell right into the groove as we hit the road. We found the house by GPS without any problem. It is a large, very nice place. 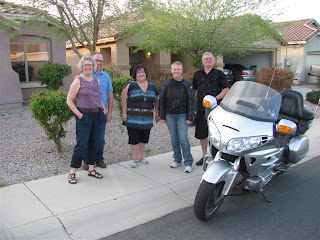 Elli, Ron, Diane, Sandy and Leo
We followed them to an open air restaurant named San Tan Flats, where you get a table and then line up to place your order. They give you a number and you watch the boards until that number comes up. Then you go and get your food. It was jam packed when we got there but everyone was in a jovial mood. They have fire pits near the tables and a guy who started a fire near us accidentally let the cardboard box he brought the wood in ignite. Big flames. But the food was good and so was the company. 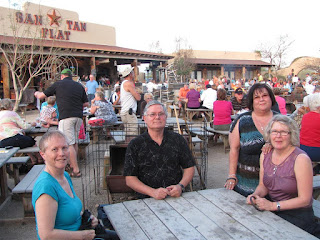 San Tan Flats (Ron is off looking for menus)
It was dark by the time we finished eating but the temperature was absolutely perfect. We bid goodbye to our friends and returned to Silveridge, using the secret access code to get in the gate. Off the bike, we met new neighbors Dave and Cathy, who are from Chicago and have an Airstream across from us. Then we went down and visited Les and his wife Jackie to plan a bike ride for tomorrow.

Later, we returned to the RV and I sorted pictures and transcribed notes from the day.