It was warmer this morning. All of 54F but it was also quite windy. I had more problems with the 30 amp power plug but I found the contact cleaner I sprayed in it last night was now leaving a black residue on the plug. I plugged in a few times and, after wiping the crud off, it connected positively. Maybe that did it.

Pat was volunteering at the Hospice Thrift Store and KT was at school, so it was just the guys and Sandy who headed for the border crossing at Los Algodones about 9:00 AM. I wouldn't take the bike across without insurance so we parked in the huge lot on the US side owned by the Quechan Indian Nation ($5.00 per vehicle). 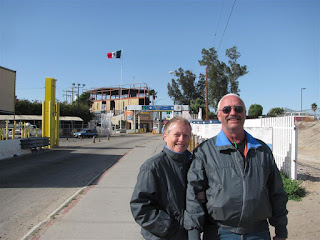 Yonder Lies Mexico
We walked towards the border and I had my passport out expecting to encounter the official checkpoint at any time. There wasn't one. We walked straight into Mexico and no one cared. We immediately found ourselves in a busy area with many shops and vendors. And the vendors here were motivated. And they speak better English than the people in the US town of San Luis. Sherm and Wrong Turn probably saved us from some pitfalls as they guided us away from the congested area to their favourite spots. Among other things, there are over 350 dentists in Los Algodones catering to the cross border crowd. 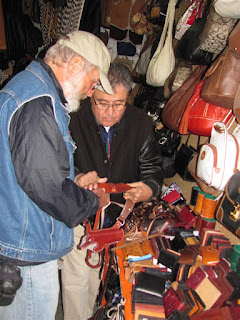 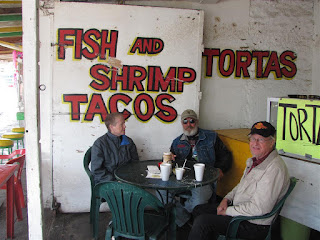 Settled in for a snack (the beef taco was great) 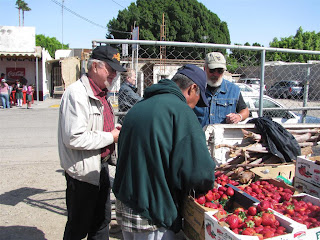 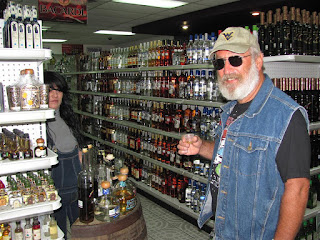 WT trying free samples of tequila in the grocery store
My concern about crossing was getting back, considering my namesake on the Homeland Security list. We lined up. They said this was a very short line and it only took about half an hour to reach the Border Patrol officer, one of four sitting behind counters. I handed over my passport and he slid it through the reader. Then he looked at me. A long look. Then he looked at the screen. Then he looked back at me and had me take my glasses off. Then he looked back at the screen and frowned. I could see the wheels whirring away but I just stood there and said nothing. Finally, he gave me back my passport and waved me through. The other three were standing outside waiting for me because they were sent right on through. I know I came within a hair of going to the back room.

We got back to the park a little after 12:00. We headed out again at 1:00, first going to the Hospice Thrift Shop Pat volunteers at. They take donated clothes, furniture and things to resell raising money for the local Hospice. We hoped to find Sandy a white shirt but the only one she liked didn't fit. She did buy a warm pink sweatshirt and I got a pair of denim shorts.

Pat at the Hospice Thrift Shop
Then we rode on to the first flea market, where Sherm needed to get his fruit cup fix. We wandered around a bit and Sandy bought some clothes pins, six for a buck. Then we moved to the larger market on Avenue 4E. There were lots of interesting things but all I bought was some silicon tape and Sandy got an Ann Rule book. 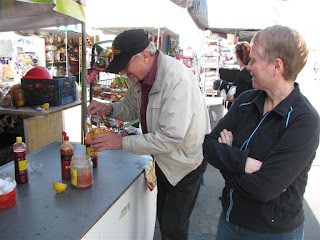 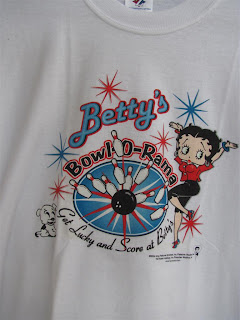 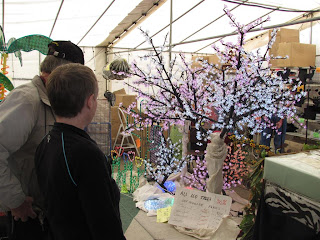 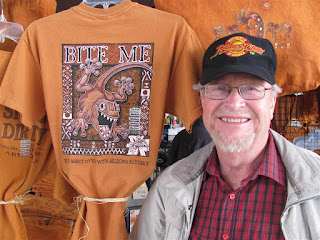 This one is for Jax
They were closing up about 4:00 when we pulled out. Sherm took us home yet one more different way.

Back at the park, the power was still on. A good sign. The bad one was the little tiny ants that had found their way into the RV and onto the kitchen counter. Some research and investigation and I discovered they were coming in via the land line power cord. We wiped it down with Lysol and then coated the cable in talcum powder. By bed time, the ants were absent.

We had supper and then went to the Mall with Sherm and Pat. WT and KT are leaving Saturday for a few days and we won't see them until their wedding in North Carolina, so the four of us went in together on a gift and Sherm made a very nice card. Then we went over and presented it to them. They responded with healthy carrot cake. 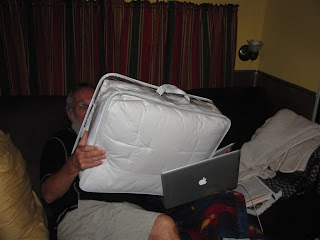 WT and KT can be a difficult couple to photograph
BTW, to anyone who watched American Idol, we're glad Casey is still in the game.
Posted by Jim "Skid" Robinson on 3/24/2011