It was 47F this morning as the cool trend in Yuma continued. I am coming down with a cold and am sneezing, coughing and my sinuses are stuffed up, but it isn't too bad.  Yet.

We heard this morning that Elizabeth Taylor had passed away during the night. I was reminded of a Doonesbury books several years ago the referred to Liz in the title "A Tad Overweight, But Violet Eyes to Die For". She was an icon of her age. May she Rest In Peace.

After breakfast, we had coffee and Mexican biscuits at Sherm's. There were some complaints about them being dry but Wrong Turn and I liked them just fine. People are pulling out of the park in droves and heading for home as the snowbird season starts to draw to a close. From the weather reports up north, I think some of them may be leaving too soon.

This morning, all six of us headed out on the bikes. We stopped at a place in Yuma so Sherm could buy stamps, made another stop at the bank, and then crossed the Colorado River into California heading through the irrigated fields of the Imperial Valley. The bike said it was 20C, which was just perfect for us. 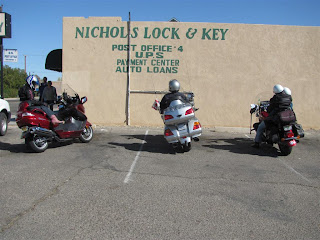 I would love to have seen Mr. Nichols business plan
After riding some straight roads with almost 90 degree turns past the fields and groves of date palms, we arrived at Sun Garden Growers. Sherm says they make the best date shakes. I don't have anything to compare to, but they were excellent. I saw a jigsaw puzzle showing native tribes of North America. Somehow, they missed the Ojibway. 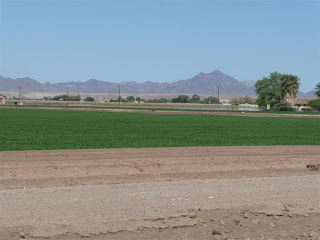 Fields of the Imperial Valley 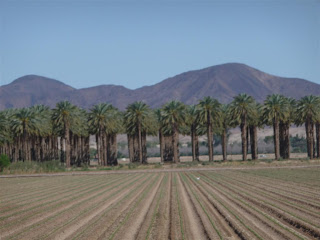 Date palm grove (I really like this photo Sandy took) 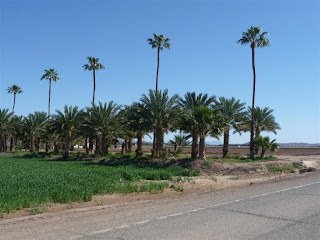 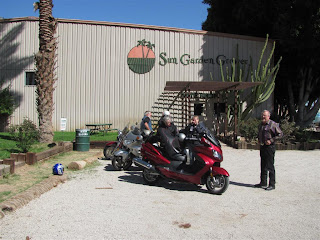 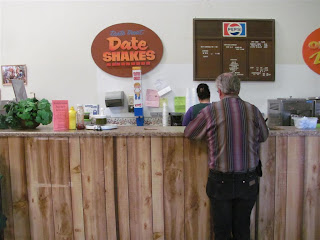 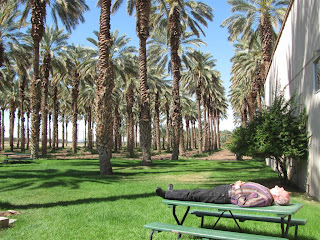 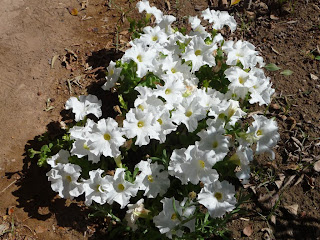 Sandy found this flower
We continued on, stopping at the Laguna Dam. This is the last dam on what was once the mighty Colorado River. Arizona is on the other side. 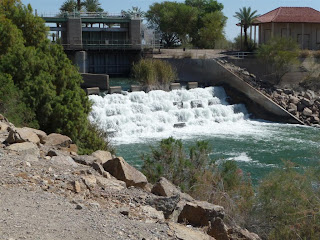 Laguna Dam on the Colorado River 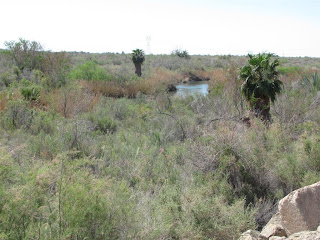 What is left of the Colorado River
Although I didn't realize it, we crossed back into Arizona soon after. I found myself totally disoriented by the end of the ride. Sherm said they had a new museum at the Yuma Proving Ground but we will never know because Sandy and I chose to wear sneakers today instead of boots. To ride on a US military installation, you need to be wearing full safety gear so the guard politely suggested we come back another time. A few miles down the road, we did come to what remained of their outside display and, no guard being present, stopped for a look. 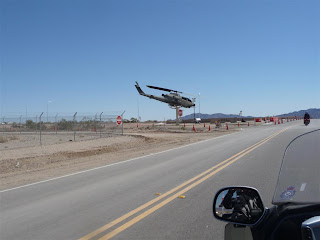 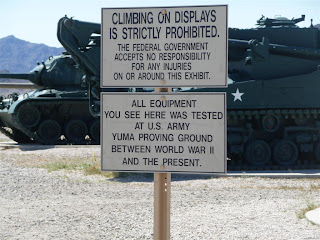 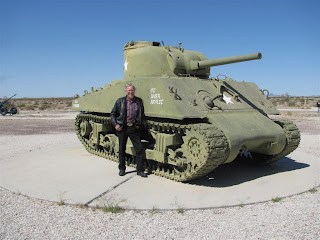 Sherm and the Sherman 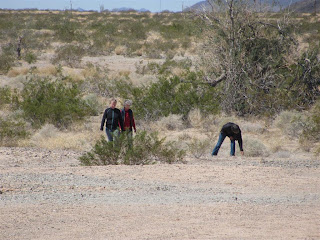 I'm not sure where the ladies have been
On the way back to the bikes, I got talking to an older gentleman and his wife in a very sharp red Mustang. It turns out they were from Hamilton Ontario. We followed them out onto US 95 and then passed them but soon turned off on a road to traverse the Dome Valley. This consisted of more straight roads with 90 degree corners but, over here, they were actively harvesting crops. We also passed one feed lot and I wondered if this provided some of the fertilizer for the fields. 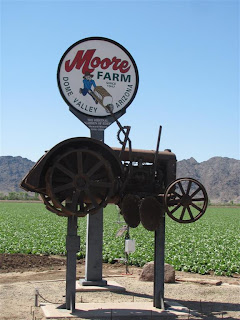 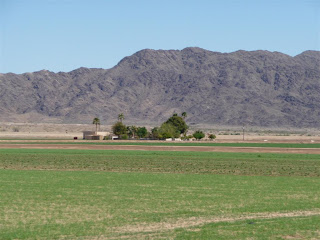 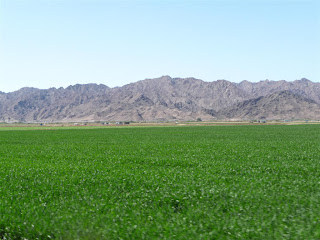 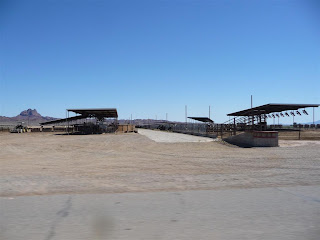 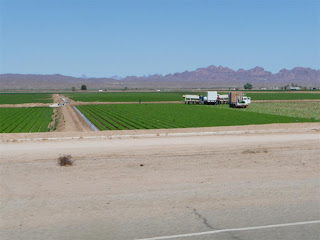 Harvesting the crops
At the end of the road, we turned east (I later figured out) on Old US 80 and rode on the Wellton where we stopped at Chuck's Stage Stop Restaurant. We could have eaten at Geronimo's Mexican Restaurant but Sandy isn't a fan of south of the border fare. I had a bacon cheeseburger with heaps of tasty bacon. Sherm had a hot pork loin sandwich. 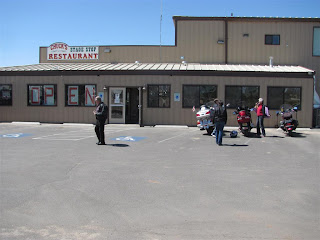 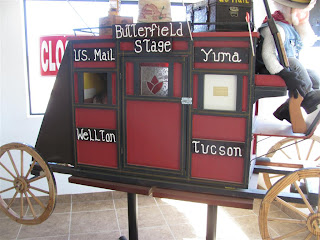 The Butterfield Stage
From Wellton, we followed Old US 80 back west until it crossed I-8. We climbed on the slab and continued on, getting off at the outskirts of Yuma while Wrong Turn and KT continued on towards home. Sherm took us to see a Park and Sell lot with a lot of motorhomes. One that caught our eye, but not our budget, was a 40' 2001 Foretravel Coach that had been custom built for Al and Maureen, who own homes here and in Montana. It was a spectacular unit, originally costing $489,000. The asking price here was $129,000. Although Al, who had also been a Wing man, knew we weren't in a position to buy, he took time to show us the unit and talk about what it's like to own and operate a large diesel pusher. Unfortunately, I was so enthralled I forgot to take pictures.

We continued on to another Park and Sell where the owner knew Sherm quite well. He didn't have much in the way of RV's but I did inquire about a sweet off road 1965 Volkswagen. It turns out that was his personal vehicle. As an old VW owner, I really liked it. 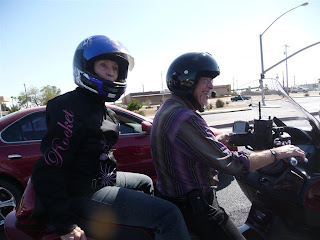 Sherm and Pat
Just down the road, we passed the Marine Air Base and I will swear I saw two F4 Phantoms take off. I figured I was seeing things because the US military hasn't flown Phantoms for years. Then a Harrier took off, made a circuit, and came back and hovered over the runway. Back at Lynda Vista, I was researching F4's in Yuma and found one had made an appearance at the air show last year. I also discovered the 2011 Yuma Air Show was this Saturday, so anything was possible in the sky. We now have to reshuffle plans again so we can go because it is commemorating 100 years of naval aviation and our good friend Slammer was a naval aviator.  He may even have been there at the beginning.

After supper, we went to WalMart with Sherm so he could get some vinyl tape for the Minnie Winnie awning.  We bought a windshield sun shade for the motor home.  When we got back, it was a quiet evening and, after getting two more blog days posted, we turned in. I am starting to feel right at home in the RV bed.