We were up at 6:00 AM sharp (Central Time, this will become important later). I had a nice cup of Timmy's coffee and played with the dogs while Sandy did whatever it is she does in the mornings. My eye has been bothering me since soon after we left home and today it was swollen beneath it. Looks like a sty. 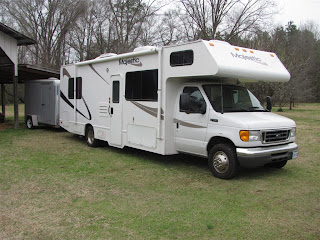 RV ready to go at Blondy's
We bid Blondy goodbye with many thanks for all she has done for us. She headed to work and I settled in to maneuver our outfit to the highway. Although I did well driving it last fall, I was still concerned about getting back in the saddle. No problem. Once I got going, it was as easy as pie. Trying something new, I didn't engage Tow-Haul Mode on the highway and it pulled very smoothly without the aggressive downshifting. The Toe/Haul will still come on in town because it makes the transmission downshift when you tap the brake pedal, saving the pads.

We motored up to I-20/I-59 and stopped at Jack's for breakfast. This was where we had met Blondy last November. I checked the bike (this also will become important later). We drove northeast on I-59, bypassing Birmingham on the I-459. The unit was trucking along at 60 MPH and, other than being tired, I was having a great time driving it. We stopped at a rest area near Gadsden Alabama so could have my 5 Hour Energy Drink and walk around a bit. After Gadsden, we hit a long stretch of construction with traffic reduced to one lane each way divided by a concrete barrier. You need to be on your toes because, at 8'4" wide, one moment of inattention can be very expensive. After we got back to four lanes, the right lane was so rough everyone traveled in the left and passed on the right. Finally, after Fort Payne, the pavement improved enough to move back to the conventional lane.

In Georgia, we pulled off at exit 11 looking for the advertised Welcome Center. We never found it so, with heavy hearts, we got back on the big road and continued on. Leaving I-59, we followed I-24 into Chattanooga and stopped at WalMart for a few supplies. I checked the bike for the 4th time and all was well.

It was a short distance to Camping World where we checked in with Eric in service and confirmed tomorrow's work order. Then we registered for the adjacent campground and drove in to find a site. The creek next to the facility had overflowed its banks and flooding was in progress but there was a high road between there and the campground. The sites were gravel with a bit of mud. We got located and hooked up the water and the power. The lady hosting in the campground had a neat little golf cart with a vintage Chevy style body on it. 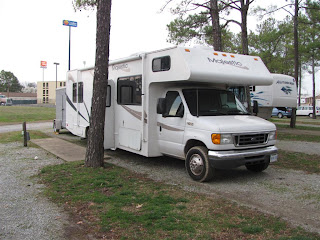 Set up in the Camping World (Shipp's) campground 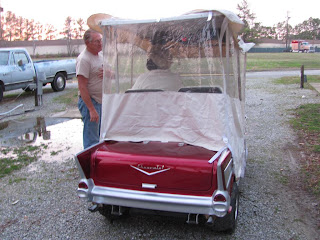 A cool set of wheels
When I opened the bike trailer, the tie down on the left side had broken. That was a first. The bike was leaned over but the Condor Chock kept the weight off the mirror, which was resting against the door. Luckily, the scuff marks rubbed right out. I replaced the broken strap and added a secondary strap in case of another occurrence.

I phoned Tony and he said he would pick us up at 6:30. We rearranged gear and then went to explore the campground. As we came out of the shower building, a car was honking its horn at the security gate. It couldn't be Tony because it was only 5:30. But it was. I was still on Central time. We rushed to change shoes and Tony and Jean took us up the City Cafe where the gang was assembling. In addition to the four of us, Crystal & EZ, Phin, Keith, Scooter & Jan and Mikey & Linda. The food was good and the company was better. It was good to see everyone again. Someone (I won't say who) was celebrating their 19th anniversary but the male half of the couple forgot. Ouch. Anyway, Happy Anniversary to both of you.

After supper, we got a look at Scooter's GL1800. It's a very nice '02 and I hope to be able to ride with him some time soon. Unfortunately, being the dummy that I am, I forgot to take any pictures. Sorry about that. We spent a while after supper visiting before Tony and Jean took us back to the campground. It was cool but, since we were plugged into their AC, we used the ceramic electric heater instead of the LPG furnace. We turned in for our first night in the RV since last fall and went right to sleep.