It was finally time to move on today. We'd be leaving the idyllic Silveridge RV Resort and moving all of 13.2 miles down the road to Slick's place in Gilbert for the VROC gathering. I told Sherm we would meet him at a Walmart on East Baseline Road and we could head over to Slick's together. He estimated he would be in about 1:00 PM.

First thing, we headed over to the laundry and showers again. Then we picked up our Email using the WiFi hotspot in the lobby. Back at the RV, Norm and Les supervised my dumping the holding tanks. The operation was successful and the hose did not break. On the downside, the short hose I bought the other day was defective. The screw on end was crimped too tight and wouldn't turn. The black water tank readout is still showing 2/3rds full so I expect something is hung up on the sensor. I'll take the cleaning wand to it in Yuma.

Tanks emptied, Les took me over to the other resort in his truck to bring back the trailer. We dropped that near our site, disconnected the services from the RV and got everything stowed away. Then I pulled out and we connected the trailer. Lastly, I loaded the bike. We lingered a bit, not really wanting to leave, but got away shortly after the official checkout time of 10:00. I need to thank Norm and the fact that Carl had to return to Iowa for a wedding for getting us this serendipitous spot just when we needed it.

Finally, we were on the and arrived at the appointed WalMart before 11:00 AM. I went in and returned the bad hose. Then we bought some groceries and other supplies. Back at the RV, I fired up the generator, air conditioning and TV. We had lunch and settled in to wait for Sherm. At 2:00, with no sign of Sherm, Sandy sent me back in for some meal bars she forgot on our first time in the store. Little did I know that Sherm had sent another Email before leaving that revised their ETA to between 2:00 and 3:00. Splitting the difference, Sherm, Wrong Rurn and KT rolled in at 2:30.

Sherm and Wrong Turn at the WalMart
We left the parking lot heading for Slick & Honey's. It was 3.8 miles according to the GPS but was a little more due to a wrong turn. And Wrong Turn wasn't even leading. We found the house but no one was home so we unloaded the bike, disconnected the trailer and turned the motor home around. The three bikes in the driveway now sported plates from Oregon, West Virginia and Ontario. About then, Honey arrived back from work and we got a chance to see the inside of their beautiful home. Slick got home soon after and we met Honey's daughter Hannah, now to be known as Valley Girl. She is in Junior High School and is a dedicated Justin Bieber fan. We told her Justin's home town is just a hop from our daughter Heather and Tom's place. 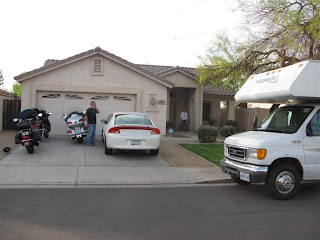 Motorhome in front of Slick & Honey's 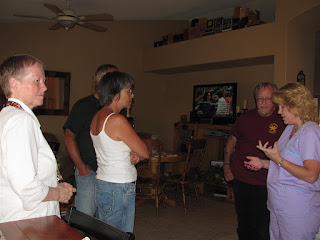 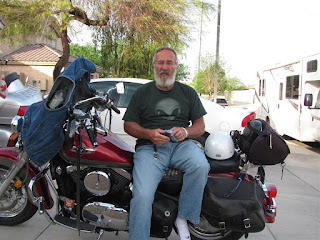 Wrong Turn of Fayetteville West Virginia
Wrong Turn and KT will be tying the knot at SEVROC in May and still need to find rings. They have specific ideas that include turquoise and wanted to check out a western store in town called Shepler's. We found it on the GPS and I led the two lovebirds and Sherm over to have a look. They didn't have what we were looking for but this place is awesome for anyone wanting to be an urban cowboy. 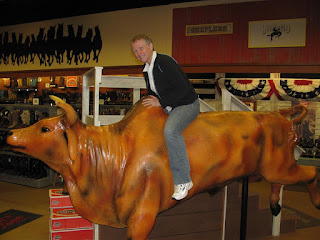 KT's toes
I led us back to the ranch where John was just arriving with pizza and the famous motorcycle journalist, Teri Conrad, had arrived from the left coast via Wickenburg. Why Wickenburg, you might ask, looking at a map. Because it was there, I guess. Sherm made a batch of his signature margaritas and we settled down for drinks and pizza. Soon after, Tony D showed up with new lady Andrea, her daughter Cassie and grandson Mr. Liam. Tony's signature long ponytail was gone, shorn due to job interviews. 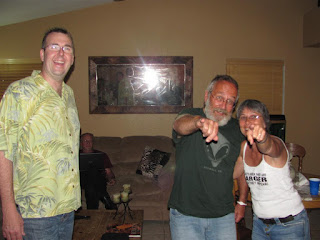 Young Mr. Liam is the centre of attention
Tomorrow, we will have a super moon. It will be full and also at it's closest point to Earth for decades. It was nice of Slick to arrange this for the party. 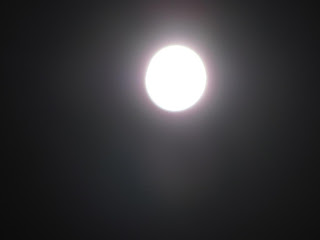 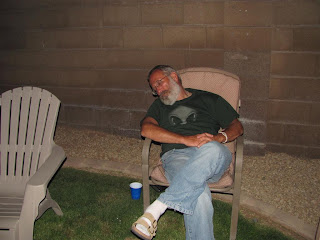 Wrong Turn has had a long day
The gathering didn't last too late and Sherm, Sandy and I adjourned to the motor home by 10:30. Tomorrow, we ride.
Posted by Jim "Skid" Robinson on 3/18/2011

Enjoy tonight's party. I expect there will be lots of howling at the moon.

If you decide to howl at the moon again remember to keep your pant in there proper place! Ride safe have fun and keep us old guys posted!