We were awakened about 6:00 AM to the chirping of the low voltage warning on the CO detector. I had left the furnace on all night and the fan drained the single house battery. There wasn't even enough juice to start the generator so I started the engine (separate battery) which put power to the house circuit. Then I fired the Genny up. 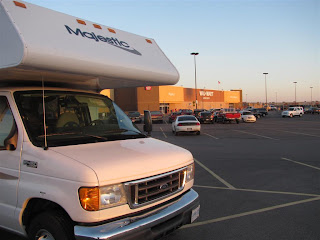 Morning at WalMart
After a breakfast of cereal and blueberries, we were on the road shortly after 7:00 AM. We immediately encountered strong gusting winds from the southwest, giving us a combination of headwind and crosswind. I drove with the steering wheel cranked about 20 degrees to the left. The radio news told us about the 8.9 earthquake in Japan.  Unbelievable.

A few miles down, Sandy asked if the CB antenna was supposed to be parallel to the ground. No, it wasn't. I pulled off at the first opportunity, straightened it up and tightened the set screw. Across from where we stopped was a church with a "Bikers Welcome" sign out front. 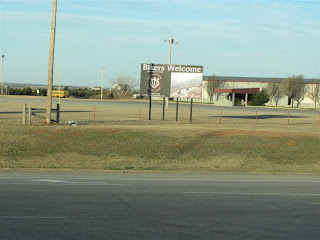 Bike friendly sign
I noticed as we cruised along that this part of the country has more truck stops than towns. Occasionally, we would see an old style gas station abandoned and falling down. I guess these fell victim to those same truck stops. Near Weatherford, we saw our first wind farm of the day. Those blades were really churning out the energy in these winds. 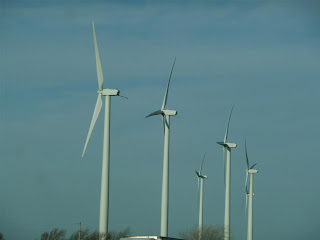 Wind farm working hard
Just past Weatherford, a semi passed us and we saw a long line extending from the back of it. It was the inner rear tire coming apart. I never saw one do that before. It broke free when I ran over it. I tried to raise him on the radio but no luck. Then I pulled off and checked underneath to make sure it hadn't wrapped itself around any part of our unit. Finding nothing, we pushed on.

One nice idea was an RV park that advertised all the usual amenities and also boasted a storm shelter. It is probably necessary out here in Tornado Alley. We fueled at a Flying J in Sayre. They had automotive propane in the RV lane but didn't have anyone certified to pump it. My tank is still 1/4 full so I should be good for a while. I was using their WiFi until a Dutch Star pusher pulled in between us and the building and I lost the signal. BTW, a billboard told us that the shopping cart was invented in Oklahoma so I guess we can blame the Okie's for all those wonky wheels.

We crossed the Texas line at 10:25 Central Time. A stop was in order at the impressive Gray County Rest Area. They had interesting display inside describing the huge cattle ranches, the Cheyenne Indians (especially Quanah Parker) and wind energy. just before we got to the center, we passed a man pushing a shopping cart along I-40 westbound. While we were inside, he walked in so he must have been traveling at a good pace (for a walker). I called the KOA in Tucumcari New Mexico and made a reservation for tonight. 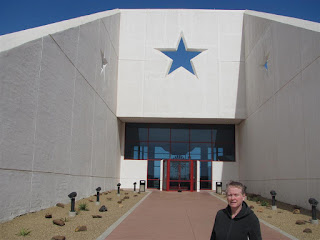 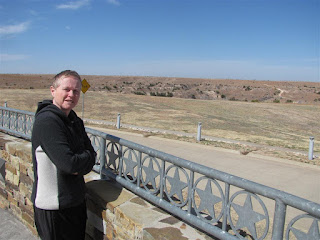 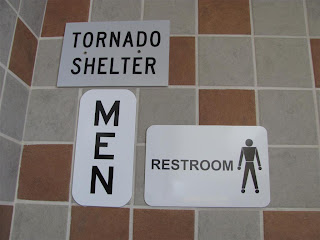 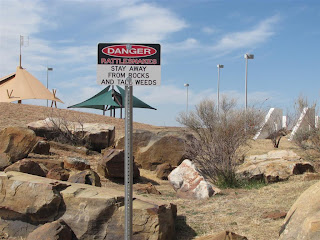 Scenes from the Gray County Rest Area
We continued on towards Amarillo fighting the crosswinds. 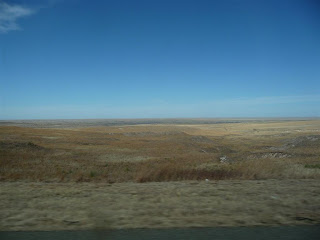 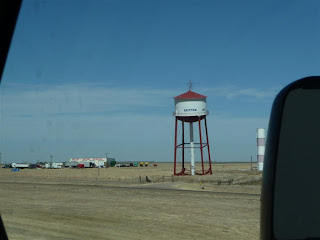 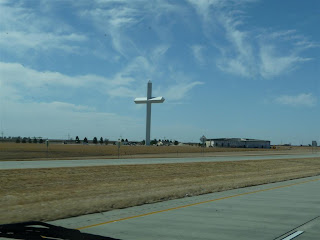 Scenes from the Texas Panhandle
Before Amarillo, we encountered another two lane stretch of construction. Concrete barrier to the left, rumble strips to the right and buffeting crosswinds. Again, one misjudgement and we lose a side of the RV. 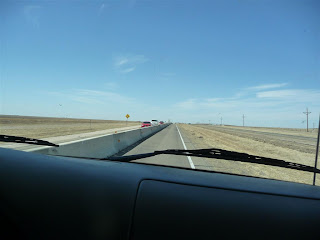 White knuckle time
Coming into Amarillo, we crossed a BNSF yard. Our friend Bob wanted some photos so these are included for him. 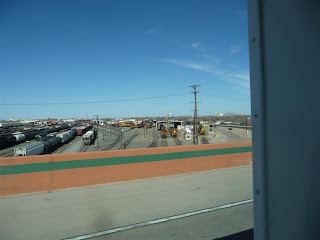 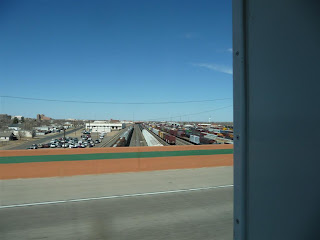 BNSF yard in Amarillo Texas
We stopped at the Texas Tourist Information Center in Amarillo and picked up a large handful of guide books and brochures on interesting things to see. The nice man at the counter gave us directions to the Cadillac Ranch and the mid-point of old Route 66. We sat in the RV and had lunch while continuing to try to get the blog caught up. 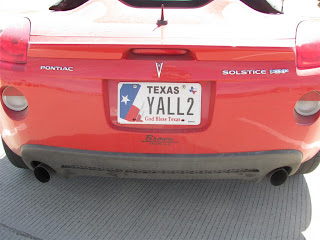 Good plate at the Tourist Information Center - Amarillo Texas
We moved on, getting off at exit 60 to look for the Cadillac Ranch. We didn't find it. Then we moved on across the Panhandle. We missed the mid-point sign as well. Zero for two today. 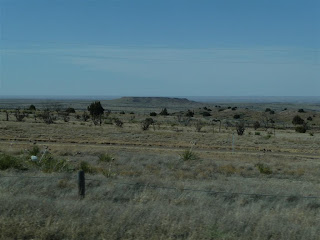 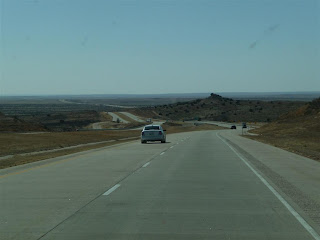 More scenes from the Texas Panhandle
We crossed into New Mexico at 3:40, which immediately became 2:40 because we were now on Mountain Time. We stopped at the Glenrio Visitor Center and got another mittload of books and guides. 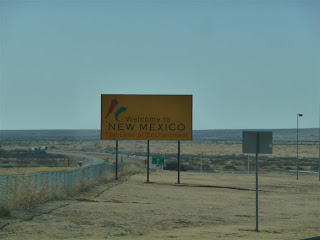 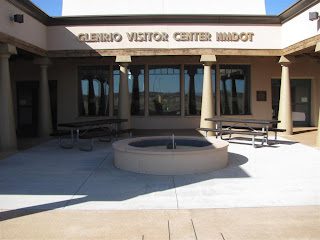 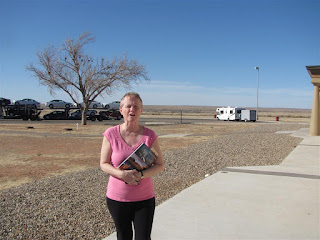 Welcome to New Mexico
It was a short hop to Tucumcari, named for Tucumcari Mountain which it sits next to. The KOA was right there and we were guided to a spot that would probably hold a 747. Sandy and I tented here on our way back from our first California trip back in 1978. Another couple had just arrived in a similar sized Class C. Turns out they were also first timers and were from Gatineau Quebec. Small world. It was hot while I hooked up the power and water. I also filled the fresh water tank about 2/3rds full. 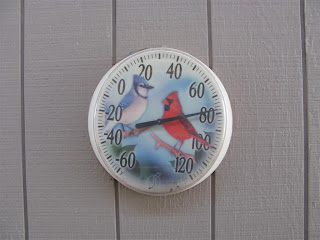 It has cooled down here in the shade 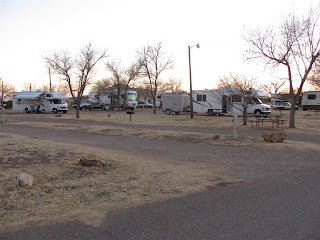 Our campsite
We went inside and ordered supper from the KOA kitchen. Then we Skyped Kim and talked to Jolene as one motorhome after another rolled in. Skype contact was poor this evening and we had to reconnect a few times. After supper, which they delivered to us, Sandy watched TV while I worked hard to catch the blog up to date. I think I have gotten it done because I am now typing this in real time. It is 9:35 and Sandy had turned in. As soon as I get it done, I'll be joining her.

As usual another interesting read. Keep us snowed in northern boys informed on your adventure. I have to go out & get the %&#@*%# snow blower going!