As usual, we woke shortly after 6:00 AM to another blue sky. I finished yesterday's blog while having breakfast. Then I went out and started to get the bike organized for our ride today. I used the Kawachem cleaner and a couple of microfiber cloths to wipe off the worst of the dirt and organized the gear in the trunk and saddlebags. I called Mel at D&D to see about getting the broken bolts removed but his shop is booked all week. With riding time arriving, fixing the bar has been demoted to the lower priority list.

Norm calls the morning gathering the "Board Meeting". The Chairman had left and we were occupying his site, but the rest gathered to discuss a bad workmanship issue on Les from Rapid City's windshield wipers. I am looking at the two Hurricanes and one Challenger by me, with their slides, dual roof air conditioners, power awnings and all kinds of room, and I am drooling. 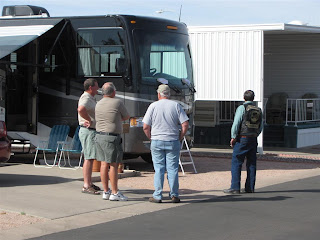 The "Board" - Les from Rapid City, Norm from Sudbury, Jim from Sudbury and Les from Swift Current
We got geared up as the temperature started to rise and went down to Les and Jackie's unit where they were set to go. We pulled out of Silveridge at about 10:00 and made a quick stop for gas at the corner. 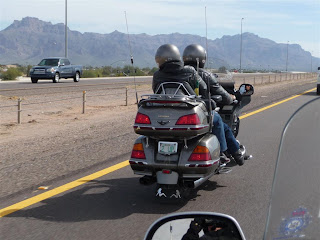 Les and Jackie and their 2004 GoldWing
From there, we headed east on US 60 towards Globe. There was moderate traffic on the flats but, as we started to climb up through the canyons, it was less congested. It felt good to be powering through the sweepers. The pace wasn't overly fast but it was quick enough to enjoy. When I ride with someone new, I can usually tell within five minutes if I am comfortable with them. Les rides in a very steady, predictable manner and I was at ease as soon as we got rolling. 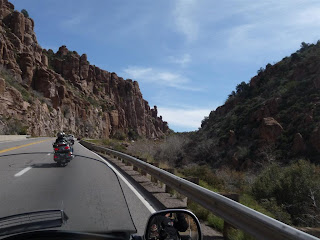 Climbing towards Globe Arizona
Approaching Globe, we turned northwest on Arizona 188 and headed towards Roosevelt Lake. This road, which I rode once before with a VROC contingent, is not highly technical but it sweeps back and forth in a very enjoyable way.

Our first stop was at a pullout for the Tonto National Monument. From the lot, we could see cliff dwellings way up on the mountainside. Les said he had walked up there once but it was quite a ways.  We decided to leave that for another day. 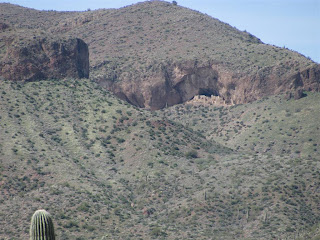 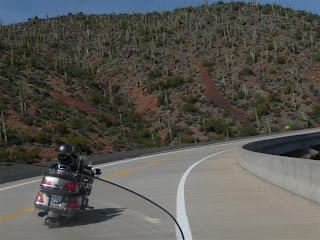 A hillside of cacti on Arizona 188
The next stop was at the Roosevelt Dam. In fact, we rode past the main Visitor Center and the dam to the lower viewing area. If we had continued on this road, the Apache Trail, we would have arrived back in Mesa but we were told it's a narrow dirt road with sheer drops. 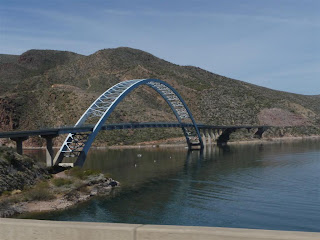 Bridge over Roosevelt Lake/Salt River near the dam 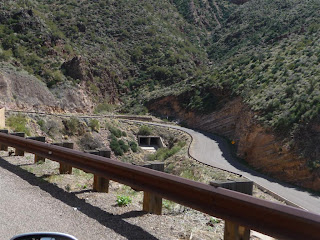 Switchback to the lower viewing area 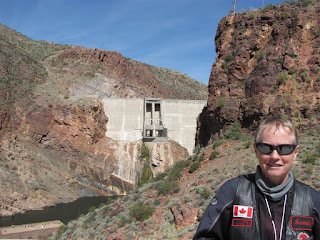 Sandy at the Roosevelt Dam
From the dam, we stopped at Jake's Corner, near the junction of Arizona 188 and 87. It was Mexican food day so we had a selection of chili, tacos and assorted other items. Outside, I talked to an Indian owner who had 34,000 miles on his modern (but not current) bike. Jake's Corner was the subject of a recent independent movie that rates 6.4 stars on IMDB. I'll have to rent it some time. 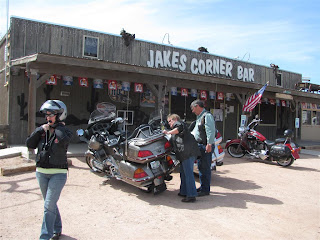 Jake's Corner
We blasted down Arizona 87, aka the Beeline Highway, passing traffic in the sweepers as we moved up and down the hills. We were slowed up a bit by a construction zone but eventually turned left on Bush Road. The ride was going well until a truck pulling a horse trailer pulled out of a side road ahead of us and didn't accelerate that fast. He stayed ahead of us as we turned left on Usery Pass Road, which brought us right back into Mesa at 3:15. It had been 24C most of the ride but it was 30C in town.

At our site, I took care of a few chores and then Sandy guided me as I moved the front wheels of the RV onto leveling blocks. Then we went down to see Les and Jackie and talk bikes, RV's and future rides. Sandy went back for a nap and I followed a while later to sort photos and collect blog notes.

Norm and Leslie-Ann got back a bit later and he took us for a tour of the two pools, two hot tubs, library, billiards room, tennis courts, shuffleboard courts, party halls and other amenities. All we were looking for were the showers and laundry. It looks like Norm and Leslie-Ann will be taking us to Tortilla Flats in the car tomorrow and the next ride will be Thursday.


Some Scenery From Today's Ride 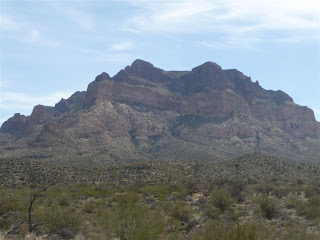 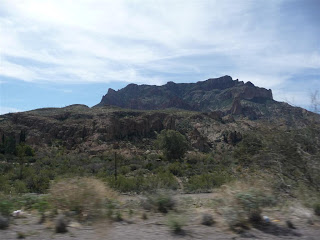 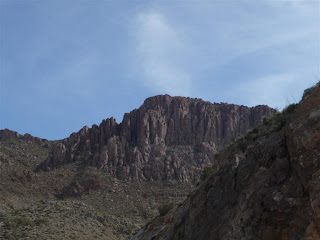 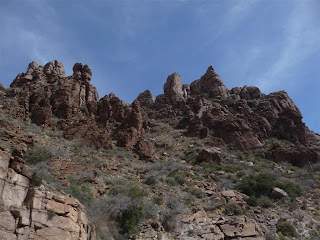 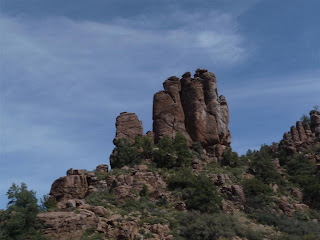 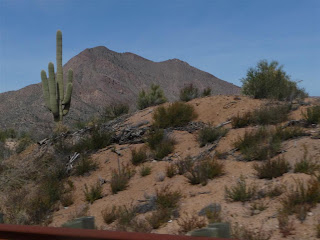 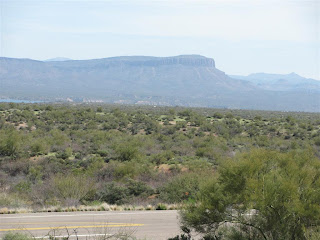 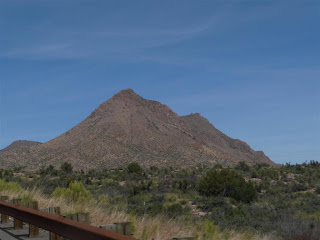 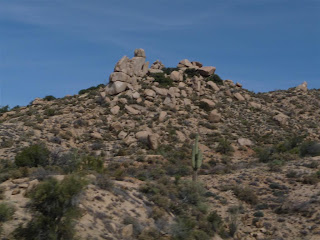 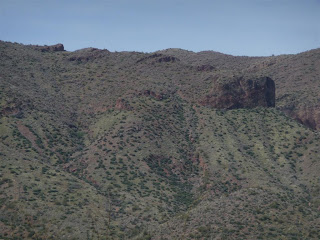 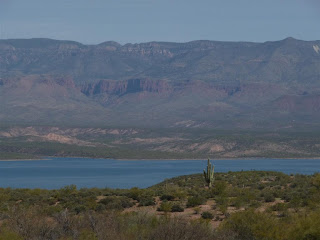 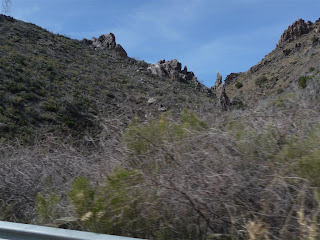 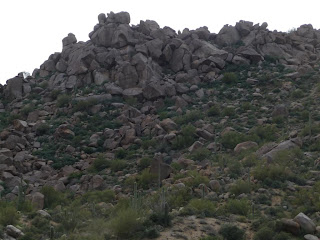