Fairly early this morning, Sherm and Wrong Turn helped me get the trailer connected to the motorhome and load and tie down the bike. We bid a fond farewell to Slick, Tracy and Hannah. Thanks again for the fine hospitality and we'll see you in Deadwood in June.

Sherm suggested I lead the group out. In addition to him, we were followed by Wrong Turn & KT as well as our celebrity, famed moto-journalist Teri Conrad. Sherm suggested we stop at a Flying J along I-10 west of Phoenix for gas and breakfast. I remember leading a group of bikes at Eureka Springs a few years ago in a Dodge Caravan and thinking that it just wasn't right. Having the two wheelers follow 45 feet of RV and trailer was even less right, but it did work.

We cruised along US 60 West and then I-10 at a steady 65 MPH. Sunday traffic was steady but not crazy as I worked my way towards the Flying J. Arriving, I pulled into an RV spot (only one moron SUV was in the RV section) while the bikes fueled up. 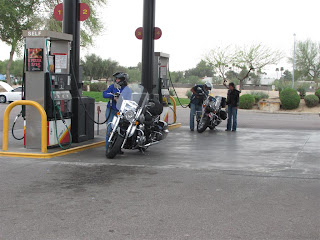 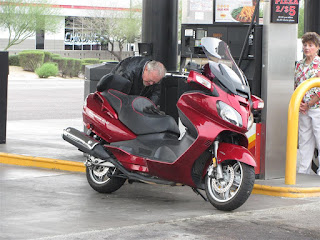 Sherm talking (I hope) to the Burgie
We went in for a Denny's breakfast. I opted for a Slamwich, which had eggs, ham, turkey, bacon and cheese between two slices of golden toast, served with hash browns. It was pretty good. Then we browsed around the shop for a bit before heading back outside. 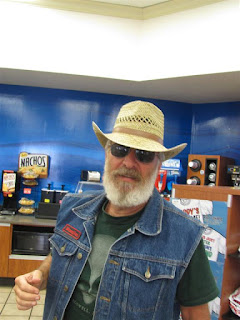 Wrong Turn tries on a hat
Outside, we spotted probably the most unique motor home we have seen on this trip. Unique is not always a good thing. It was apparently a Toyota pickup to which they added a Dolphin body. Note the added dually wheels. Note that the ad hoc tag axle tires are flat. On both sides.  State of the art trailer, too. But they had a very pretty chihuahua inside. I felt sorry for the dog. 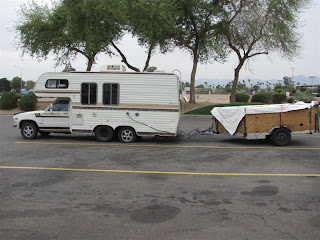 Toyota homebuilt motor home in Phoenix
We headed west on I-10 and then took the exit for Arizona 85 south to Gila Bend. We stopped again at a Love's truck stop where Jim topped up the Classic. I spoke to some HD riders from Denver who winter down here and then we met Heinz. He was riding a Triumph Rocket III and was heading for Florida where he would connect with his wife and they would ride to Key West together. He has a '96 Vulcan 1500 (not sure if it was an A or a Classic) back home. But get this. Home was in the Yukon. We gave him the VROC and ROK sites and wished him well in his travels. 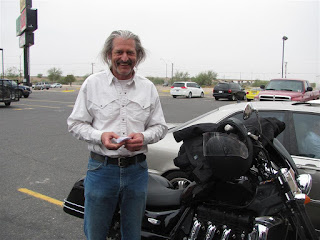 Heinz from the Yukon 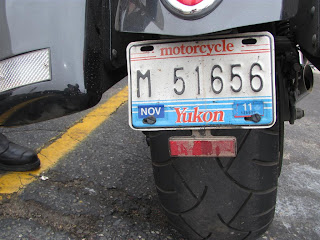 A rare plate down here
The next leg was west on I-8 under a low overcast fighting crosswinds from the south, which Sherm said were rare. Again we paralleled railway tracks but this time it was Union Pacific motive power instead of the ubiquitous BNSF we see further north. Along this stretch, it is perfectly flat except for small clusters of mountains, possibly volcanic, that jut sharply out of the desert floor. 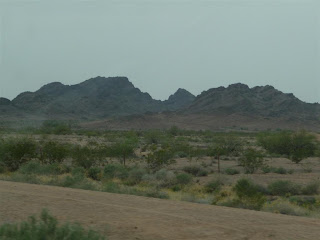 Mountains in the desert 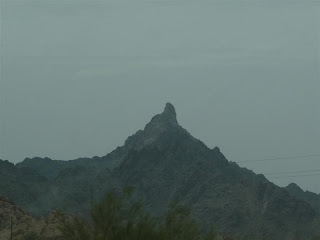 An interesting formation
We stopped at Dateland, where a grove of date palms and a new store, featuring date shakes, are located. Sherm says we will get better date shakes in Yuma. The palms were recently relocated and the store is new. There was a plaque in memory of a B-50 Superfortess that crashed here before I was born. I had never heard of a B-50, a reworked B-29, even though is was in service for over twenty years. 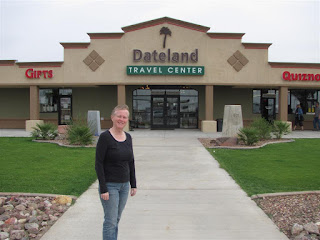 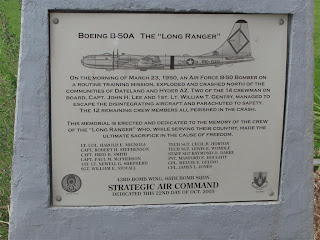 Plaque commemorating a lost B-50 crew
Moving on, all we could get on the radio were Hispanic radio stations. About twenty miles out of Yuma, we encountered a larger range of mountains which we had to climb. The gusting winds were pretty turbulent going through the pass. 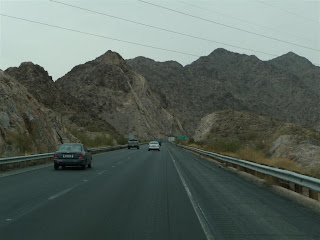 Climbing to a pass near Yuma
Near Yuma, we passed RV parks and sales lots. It is hard to believe there are this many large motorhomes in the world, much less in this little corner of Arizona. Sherm took the lead and we followed him to Lynda Vista RV Park, which he calls home for half the year. I almost hit a car as I went to change lanes but caught sight of him in my convex mirror just in time. 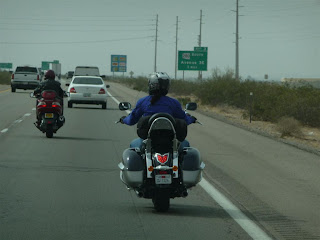 Sherm and Teri leading into Yuma 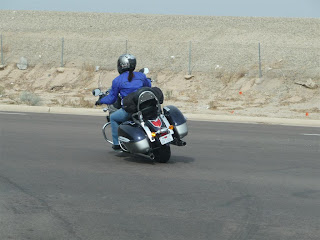 Teri making a turn on the new Nomad
In the park, we saw Sherm's wife Pat and their little dog Julie, who is recovering from an accident. Sherm and Wrong Turn helped me unload and disconnect and then they and a guy from Saskatchewan (lots of Canucks here) helped me get backed into our spot. 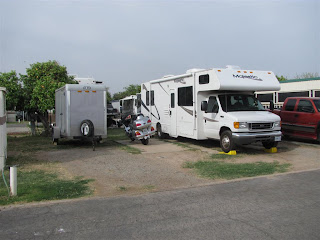 Our home for a week in Yuma This must be a movie star posing in front of Sherm's 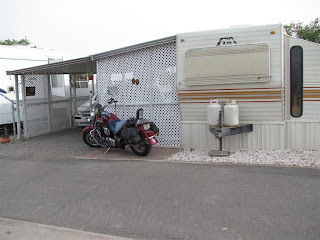 Wrong Turn and KT's digs
For supper, we took the car to the Mad Chef Restaurant. It used to be the Happy Chef until the owner got divorced. I had a turkey bacon melt sandwich with fries and gravy. They don't put gravy on fries down here so I had to ask special. Sandy had a chicken dinner special. 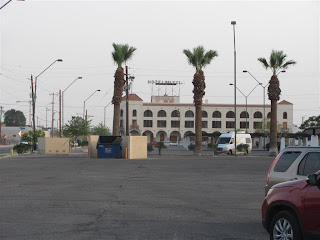 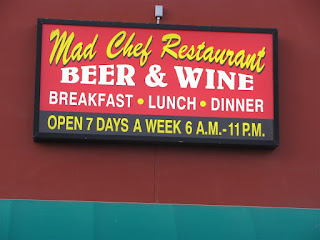 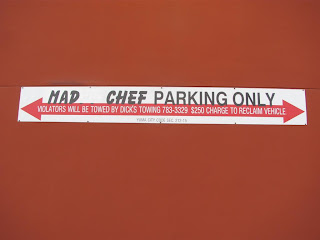 If you look closely, you can see the tails of the P's from happier times 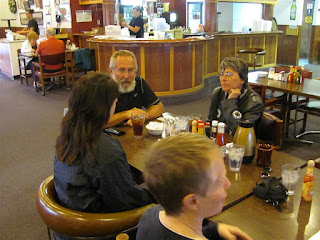 Inside the Mad Chef 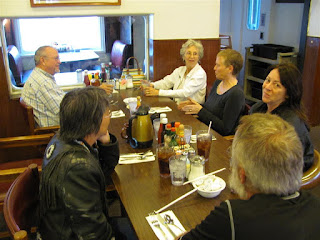 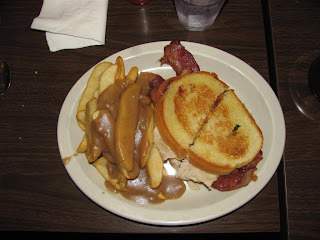 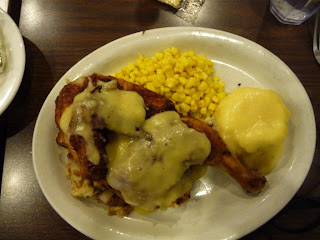 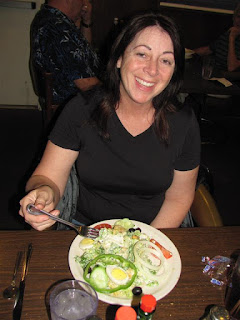 Teri had a salad 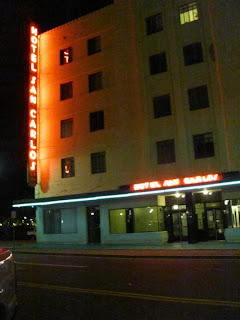 On the way back, Sherm stopped for a photo op of the historic Hotel San Carlos
Back at the park, we visited briefly before going to our separate abodes and turning in for the night.
Today's Route (209 motorhome miles):