We were up at 6:00 AM and had a breakfast of cereal and blueberries. I unhooked the trailer and disconnected the water and electric, moving the RV to Camping World at 8:00 AM. The planned work included installing a TV antenna and TV plus a backup camera, recaulking the cab/house joints, putting in a CB radio and antenna, changing the oil and filter and servicing the generator. The work order was already prepared so we turned over the keys and adjourned to the tables in the sales/waiting area. 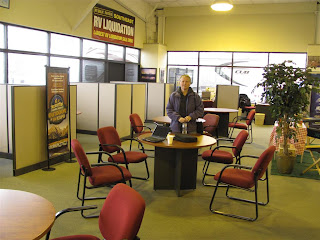 Camping World waiting area (with WiFi)
A little while later, Eric took us over to the shop to discuss the location of the TV and CB. I asked about tire tread depths and he said they replace them based on age due to weather checking. I pointed out that we would not be keeping a set that long but never did get a clear answer. 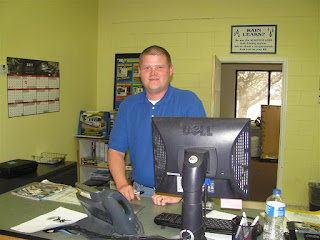 Eric at Camping World
We were warned that we would need to pull out first thing tomorrow morning since more heavy rains were coming and they were expecting more flooding. This was scary because the water levels were already high. No problem since we expected to be heading west at first light. 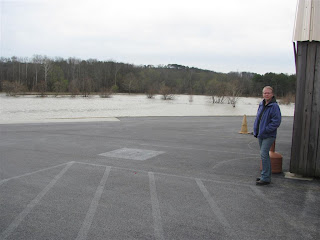 High water in Chattanooga
Jean called and asked if we wanted to go to lunch. We thought that was nice so she picked us up and took us to Wally's where we ordered off the menu instead of attacking the buffet. After lunch, she took us for a drive to see the massive new Volkswagen plant that is being built and we drove past the Tennessee Traffic Managment Center that tracks all the traffic on the highways and controls the overhead signs that are supposed to give timely information to drivers. This is Tony's current project.

Back at Camping World, we were told the storm was advancing more quickly than first anticipated and that everyone needed to be out tonight. The rains started at 4:00 PM as I was out stowing gear in the trailer. The intensity picked up as we paid for things we bought in the store including a new high tech sewer hose to replace the one I broke last fall. One big ticket item was a ladder that stows at 28" long but extends to 10' to allow me to get up on the roof. I called Jean and told her we were being evicted and she invited us to spend the night at their place in Hixson. Finally, the RV was done at 6:00 PM so we hooked up in the rain and got out of there. Blurry photo of hooking up in the rain
We followed the GPS directions to Tony and Jean's. This took us over the famous Chickamauga Dam. They live on a ridge and their street is a cul-de-sac. Tony suggested I turn at the end and come back. Unfortunaely, three vehicles were parked there and tomorrow was garbage day so there were large trash bins set out. I managed to make the turn in four moves, not quite jacknifing the trailer.

Parked and inside, Jean had pizza, pasta and salad laid out for us. It was an excellent meal and, again, the company was even better. Sophie, their little dog, is one of the few chihuahua's I ever remember liking. After supper, we spent some time visiting before turning in for the night to the sound of raindrops on the roof.