One note from yesterday. Last night we finished the last piece of the pound cake Blondy made for us. That lasted us all the way across the country. Thanks for keeping us fed, Donna.

We were up at the usual time today, bundled the laundry up and walked over to the main building. We loaded a washer and then hit the showers. And what nice showers they were. Large and well tiled, it was hard to believe we weren't in a high class hotel. Then we waited for the washer to finish and loaded the clothes into dryers. While we were waiting, Sandy taught a lady how to fold fitted sheets. When our load was dry, we walked back to the motor home.

After breakfast, Sandy cut my hair outside. Then she washed the floor while I worked on fixing the bathroom fan. We lost our Wifi about 8:30 because Butch, whose router we had been using, shut everything down. He was heading for Australia to judge a dog show. Les stopped by and we explained that we were going to Tortilla Flats with Norm today so we talked about possible destinations tomorrow. Salt River Canyon looked good.

Norm pulled up in his car at 11:00 sharp and we piled in. We drove out of town on Apache Trail headed for Tortilla Flats, a place I have heard about but have never been to. The first part was across a desert with the Superstition Mountains to the east, but soon we were into the mountains and the road started to twist and wind in a manner that reminded me of The Dragon in North Carolina. Before long, we came to Canyon Lake. Down here, any canyon with a river flowing through it is dammed up to create reservoirs and generate power. This lake was formed by blocking the Salt River, the same one that the Roosevelt Dam spans except further downstream. In fact, Apache Trail goes past Tortilla Flats all the way to the Roosevelt Dam but it is unpaved in the middle. 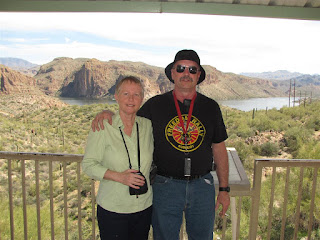 Canyon Lake in the background
We continued on twisting and winding for quite a few miles. We saw bikes on the road but everyone was very well behaved. Not one canyon bomber. But it is one ride I would like to do when I get the chance.

We pulled into Tortilla Flats, which was quite crowded. We suspect that Spring Break has added to the traffic. But with the luck of the Ontarians, we found a parking space right in front. At one time, this little place was a real town, a stop on the stage route and a place where people lived and worked. Now it is all for the tourists. They have restaurants, bars and gift shops. The line-up waiting for a retaurant table was a long one. Most of the walls are covered with autographed dollar bills and the ice cream shop has a board with police shoulder flashes. Norm went to the car and got a CP POlice flash to add to the collection. 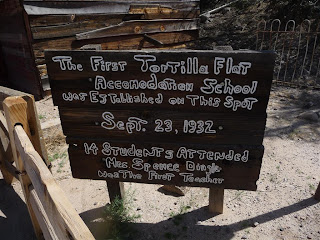 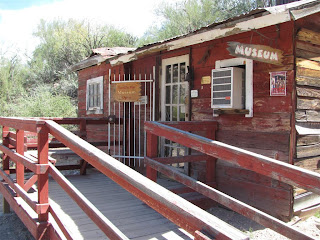 Is now a museum 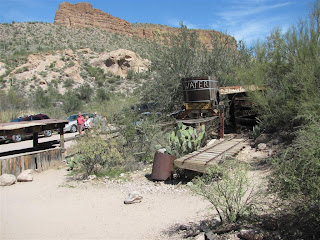 Could this be the Lost Dutchman Mine? 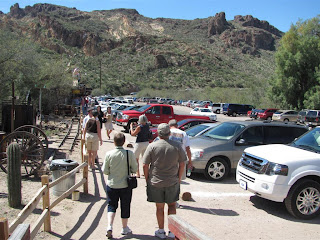 Crowded day at the Flats 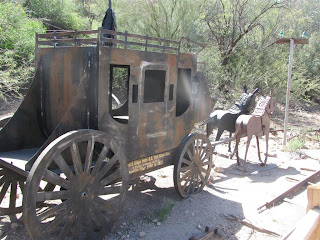 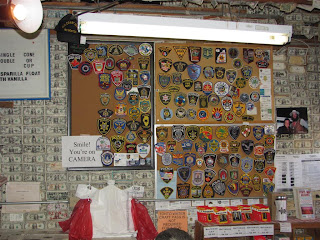 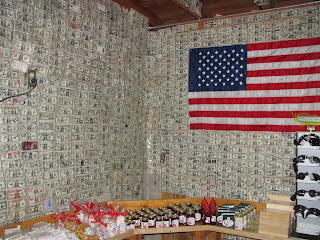 Money covered walls
Although we had gotten in and parked OK, we had gotten there just in time. As we pulled out, there were at least ten cars waiting in line for somebody to leave.

On the way back out, Norm stopped at a number of spots so we could get a better look at the scenery. One spot had a board that explained the minerals in this area were created by a supervolcano that spewed massive amounts of material over a broad area. This was so hot it welded itself together and then, later, water flow carved the spectacular canyons.  It is easy to see how the Apache were able to confound the government soldiers in this land. 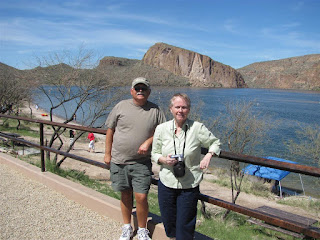 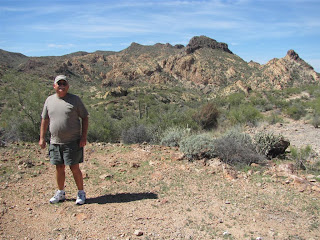 On the way back into town, we stopped at the Goldfield Ghost Town. This interesting collection of old buildings and and mining equipment has all the usual tourist attractors. On the plus side, they don't charge admission to enter the grounds. Norm directed us to the ice cream shop where we each got a waffle cone of his favourite, Dynamite Crunch. It was very good and we ate the cones while touring the square. They have staged gunfights on the weekends. 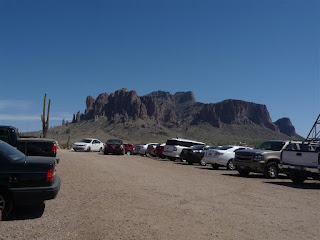 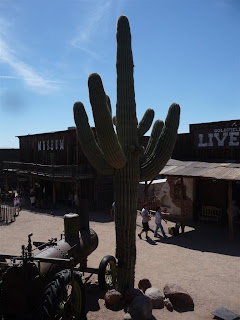 An old saguaro cactus at Goldfield

On the way back to Silveridge, we stopped at WalMart. I picked up a 15' hose and nozzle for cleaning out things which are better left unmentioned. We got back to the park about 2:30 and thanked Norm for a very interesting tour. We had lunch and I read for a while. The rest of the day was pretty lazy. I managed to connect to another unpretected WiFi for a while but it eventually disappeared too.

After supper, Sandy and I watched Survivor and then spent some time outside talking to Norm, Leslie-Ann and Jim from Rapid City. Norm and Leslie-Ann were off to Sky Harbor Airposrt later to pick up her mother, who is coming to visit and then travel back with them at the end of the month.

We were in bed fairly early. Tomorrow, we ride the Salt River Canyon (or somewhere else if we change our mind).


Scenery On The Way To Tortilla Flats 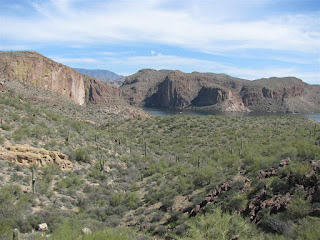 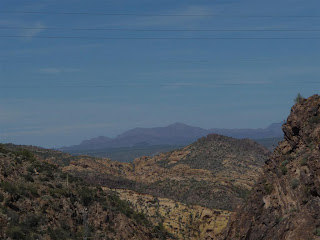 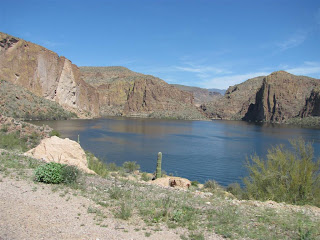 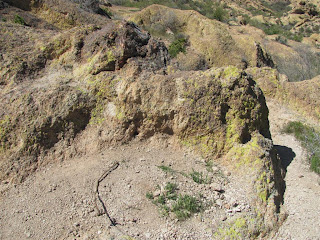 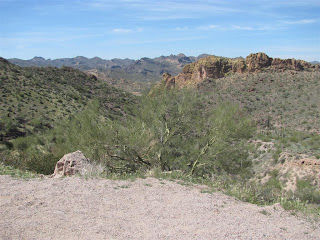 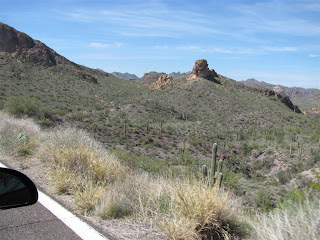 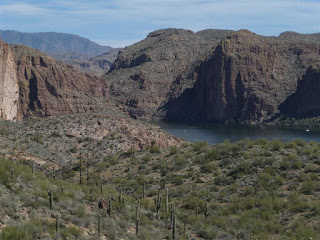 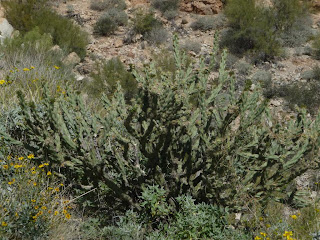 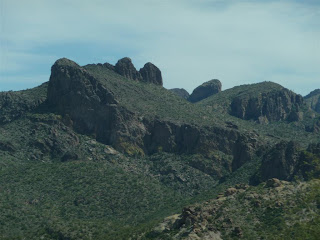 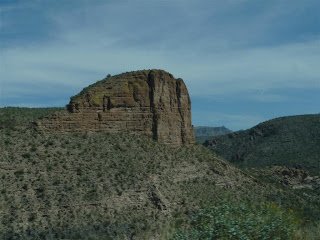 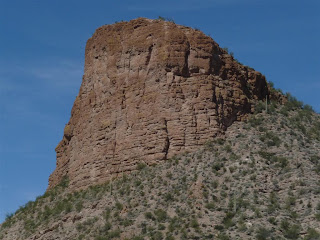 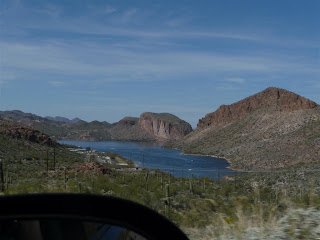 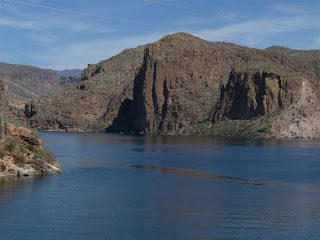 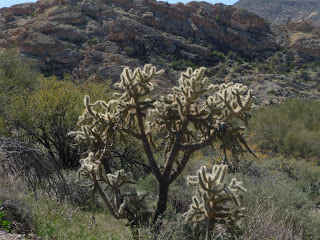 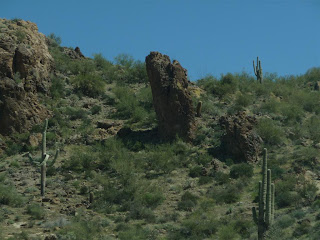