We were up early this morning and, after a breakfast of cereal and strawberries, I went through the gyrations of adjusting the tire pressures on the RV and trailer. Sherm was amused but I pointed out that he had been every bit a fastidious on the Coast Guard vessels he had been responsible for. The tires were all in good shape but I bumped the RV rubber up to 75 PSI across the board and adjusted the trailer to 50. Then Sherm critiqued my holding tank dumping procedure. I learn more every time.  A hefty dose of pressurized water via the wand into the black water tank cleared up the problem with the sensors providing false readings.

Everything drained and adjusted, we pulled the motorhome out on the street and hooked up the trailer. I loaded the bike (next time, I will remember to lower the antennae first)  and we got it tied down securely. Finally, about 10:00 AM, it was time to say goodbye and hit the road. We've had a great time visiting here in Yuma and will see Sherm again in the Black Hills in June. Thanks for everything, Sherm and Pat.

Leaving town, we actually made it about 1/4 mile into California before swinging back into Arizona but I don't think that counts enough to mark it off on my "Where the RV Has Been" map. We stopped at the Love's truck stop and fueled up before heading east on I-8. The regular Border Patrol checkpoint was closed and the wind was still as we climbed through the pass and dropped into Dome Valley. 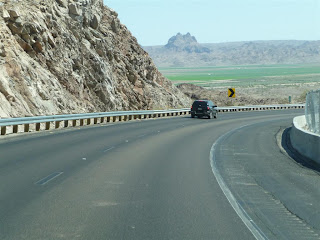 Descent into Dome Valley on I-8
There was a sign for Mohawk Valley and I later found out there are Mohawk Mountains here in Arizona. I have to wonder how this happened since the Mohawks are back in southern Ontario.

The trip across I-8 to Gila Bend was uneventful except for a surprise Border Patrol check. No problem there as they waved us through. At Gila Bend we grabbed a bit of food at McDonald's and decided to take Sherm's suggestion to skip the faster, safer Interstate route and take Arizona 85 south to Ajo (pronounced Ah-ho). The road wasn't the best but it was also far from the worst as we entered the Barry M Goldwater Air Force Range. I got to pass my first vehicle on a two lane road as we came up behind what can only be described as "Jed Clampett Returns To Mexico". 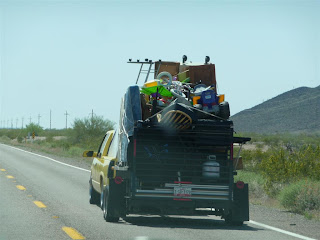 The Beverly Hillbillies move south
After many miles of desert and northbound RV's, plus a Border patrol check that wasn't concerned about the southbound traffic, the tailings lines of Ajo came into view. Besides a long history of copper mining, which ended in 1985 after a bitter strike, this little town is home to many Border Patrol families. It also seems to support a thriving group of businesses that sell Mexican auto insurance since it is on the way to Rocky Point, Mexico. It also has a NAPA, a Dairy Queen and a Dollar general so it isn't entirely uncivilized. 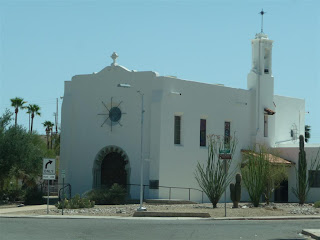 Church in Ajo Arizona
Continuing south, we came to a little town named Why at the intersection of Arizona 85 and 86. This place is so small that Garmin never heard of it. We turned left on 86 and saw a sign that said "Why Senior Citizens". I'm pretty sure this meant that the older folks in Why policed this stretch of road for trash but my first thought on seeing it was "What have they got against senior citizens?". It is nice having someone to talk to and take pictures along the way but, for some reason, Sandy didn't get a photo of this sign. 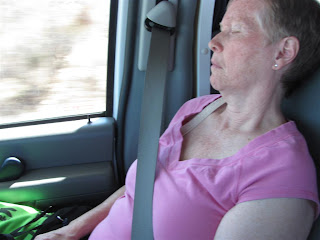 Sandy, ever vigilant, in the co-pilot's seat
As we headed east, we traveled through Tohono O'odham lands populated mostly by mountains jutting up out of the desert floor and myriad saguaro cacti standing silent guard over the landscape. The few buildings, with the exception of a medical facility and school at San Simon, told a tale of poverty and subsistence level living. 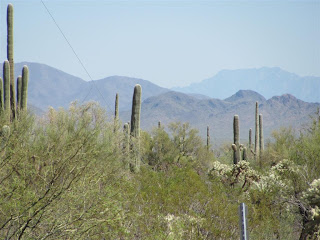 Cacti and mountains along Arizona 86 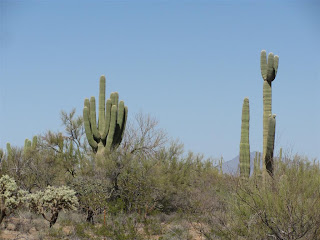 Many shapes and sizes 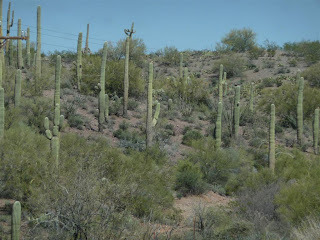 Sandy figured some of the appendages verged on the obscene 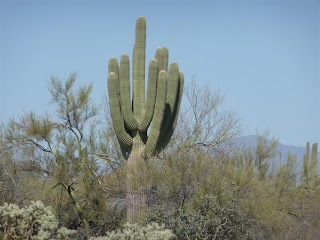 This is an old fellow 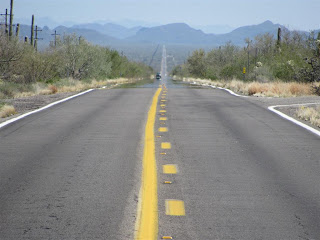 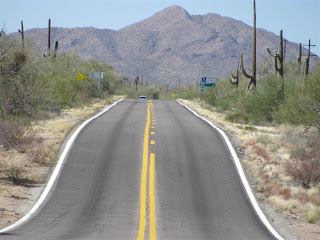 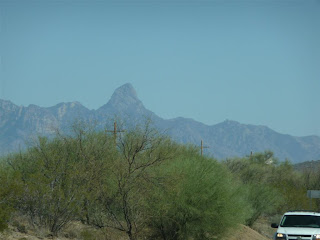 This rocky peak was distinctive
One of the things that broke the monotony (OK, the vast Sonoran Desert beauty) was the Kitt Peak Observatory, which consists of 26 independent telescopes operated by a variety of agencies and educational institutions. 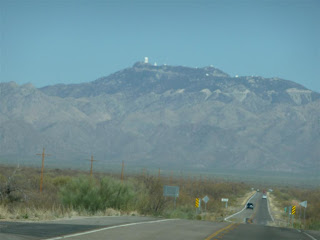 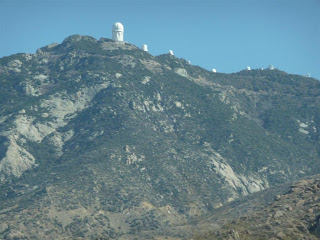 Some of the 26 separate telescopes
Near Tucson, mountains with what looked like sedimentary layers came into view. About 25 miles out, we encountered yet one more Border patrol checkpoint. The officer, a captain, asked where we were coming from and then waved us through. The rest of the way into Tucson was over rough road that was under construction. In Tucson, we took I-10 east which was also pretty rugged until we got out in the country. Then it was great and we cruised along as if powered electrically. 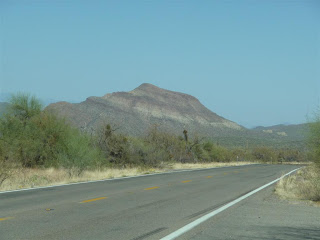 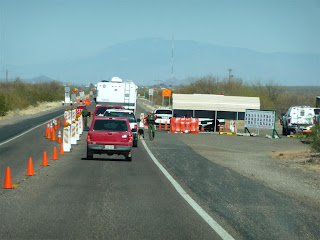 One more Border Patrol checkpoint
Leaving Tucson, we entered Cochise County, named for the great Apache chief. I remember the 1950's TV series Sheriff of Cochise, which puzzled me as a child because I couldn't understand why a western lawman drove a jeep.

We arrived at the Benson KOA at a reasonable hour. In our site, I found the water pipes wrapped in insulation. The lady who guided us to our spot explained that, last year, the winter temperature got down to 10F, killing the cacti and breaking some pipes. After setting up, I spent some time talking to our neighbor Rich. He is hauling his Harley in a small trailer, topped by a canoe, behind his truck. After spending his life running a specialty steel fabrication business in New Jersey, he is now out on his great adventure. So far, he has been to Key West and New Orleans and plans to touch all four corners of the USA before returning home. 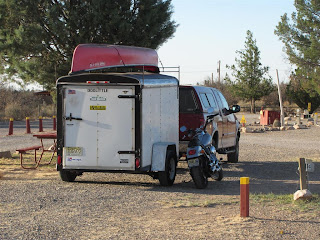 Rich from New Jersey's outfit
Wrong Turn and KT called from Tucson and said they would be over in the morning so we could ride to Tombstone and Bisbee together. It was a quiet night since the TV only found three channels; one which we couldn't get at all, one fuzzy NBC station and a really clear, but Spanish language, channel from Tucson. I really need to get the cable hooked up.  We ended up in bed before 9:00 PM.