We woke up at 6:15 AM to cool temperatures and partially overcast skies. The tires were reading 68 PSI and I bumped them up to 73 (to see if we could improve fuel mileage), a laborious process considering my Rube Goldberg method of using the booster cables to get enough length from the battery to the drive tires.

We rolled out at 7:50 leaving the partially blue sky behind in favour of solid overcast. The reaction to the motorhome pushing to the right when a semi comes abreast has become automatic. We were back to good weather in Little Rock with motorcycles riding around. We passed an exit for Camp Robinson, an Arkansas National Guard installation. We stopped at a McDonald's between Little Rock and Conway for a WiFi fix. 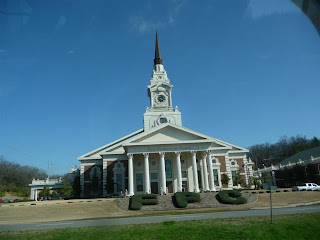 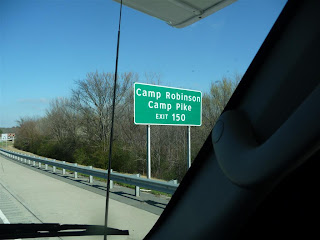 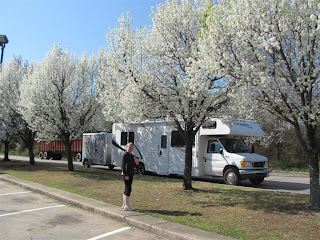 Blossoms at McDonald's
On the road again, we were straight into the teeth of a west wind. In Russellville, I saw a Flying J truck stop across from a Pilot. I wonder how that works now that the two of them have merged? We passed a sign for Ozark and the Pig Trail. If the bike was up to snuff, I would have stopped for a day and ridden the legendary road. Next time. I was managing the cruise control up the hills to try to keep the downshifts to a minimum. Third gear has to suck a lot of fuel.

Near Fort Smith, we passed an old Winnie broken down on the side of the road. One of the passengers had a lawn chair out on the grass and was watching a portable pen full of Bassett hounds.

The Oklahoma Welcome Centre had fast WiFi so we caught up again and Skyped family and friends while having lunch. 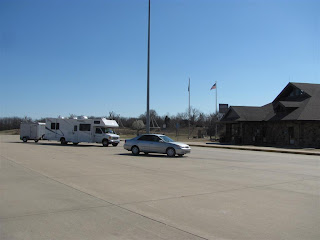 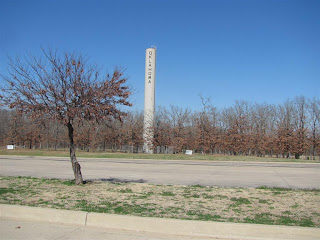 Oklahoma Welcome Centre
Continuing on, we encountered quite a bit of smoke from fires in the fields. They looked to me like controlled burns but that would be dicey given the winds. 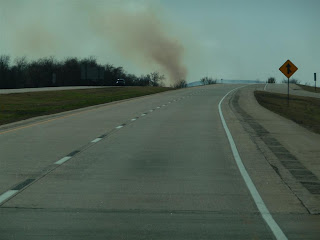 Burning fields
My original plan was to stop in Midwest City but I decided it would be better in the morning if we were on the other side of Oklahoma City. As we passed through Midwest City, we went by Tinker Air Force Base and saw aircraft on display adjacent to the highway including a B-2, a B-52, a B-47 a Boeing 707 in Air Force One livery and a few I didn't get a chance to identify.

Traffic going into Okie City was jammed up until most took the I-35 South exit. Then we hit an area with a Congestion sign and all the lanes slowed down except the left, which I moved to. Yes, this was the lane that was closed. Funny how it always works that way. I-40 through the centre of Okie was about as bad as any highway I have seen in North America. 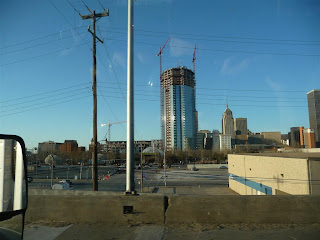 Downtown Oklahoma City
This is where I will vent in general about I-40. Although some is passable and a small bit might be classed as good, I have to wonder how the majority of such a major transcontinental artery could be allowed to get so bad. Not only that, but the construction zones where we were down to one lane each way with a concrete barrier in the middle were scary. One moment of inattention could do a world of hurt to the side of the motorhome.

All across Oklahoma, I had been noticing Indian Nations. Cherokee, Muskogee, Kickapoo and now Cheyenne/Arapaho. We pulled into the WalMart in El Reno (named for Civil War Union General Jesse L. Reno, who died in 1862 at the Battle of South Mountain, Maryland. Two nights, two towns named for Civil War generals. The Indian presence became known as soon as we went into the WalMart. We picked up some pre-made salads, buns, turkey and cheese and went back to the RV to enjoy supper. I did some off-line blog work while we watched the American Idol vote-off show.

Nice blossoms at McDonalds! I am SO ready for Spring!