We woke up about 6:00 with the rain still pouring down. It felt good the be on high ground. The radar showed a red line extending from the Gulf to Birmingham moving fast, but it looked like it would fall short of Chattanooga. The rest of the map was a sea of green as far west as Nashville, so we had hopes of better weather down the road.

Jean made a nice breakfast while we visited and then Tony had to head off to work. He sure does work a lot for a retired guy:-) We can't thank these fine folk enough for looking after us while we were in the area and hope to see them again soon. 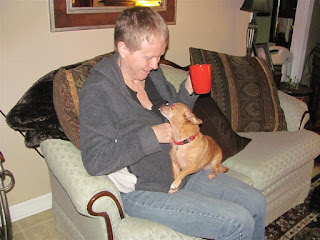 Sandy playing with Sophie the attack dog
As we were getting ready to leave about 8:45, Jean ran out with her umbrella and gave us the leftovers from last night. We started down the hill and could see a river of water running down the street. It's nice to live on top of a ridge. We followed Tony's directions instead of the GPS and were soon headed northwest on I-24 in the driving rain. 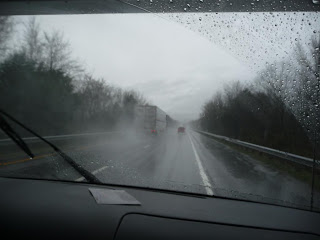 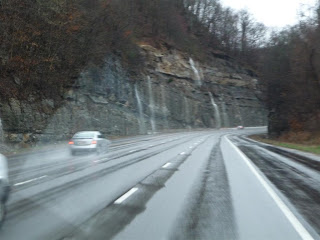 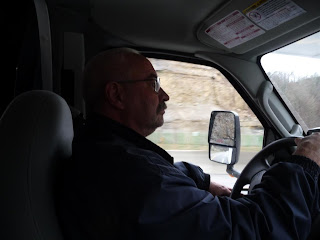 Me at work
We joined the line of trucks making the slow climb to Monteagle. I have been many places but would be hard pressed to find a grade this steep for this long anywhere else. At the top, we stopped for fuel while high winds rocked us. We continued on towards Nashville and eventually ran out of the rain. 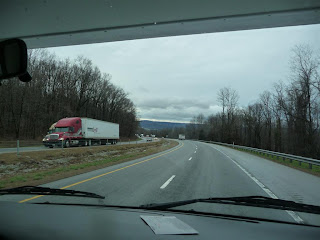 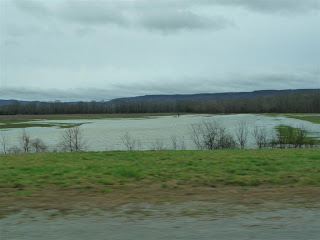 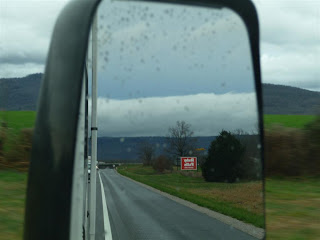 Bad weather in our rear view mirror
Needing a break, I tried to get into a Pilot truck stop before Nashville but there was an accident in the intersection and we continued on after going around a very large block. After driving through Music City, we moved onto I-40 West and finally stopped at a Flying J. While Sandy prepared lunch from the great leftovers Jean gave us, I took some time to stow some of our Camping World purchases and change one tie-down point on the bike to the upper mid frame. The food was great, followed up by a piece of Blondy's pound cake.

Pulling out, it started raining lightly. As we approached Memphis, the sun came out and I found out that the backup camera is great in low light but not so good in bright sunshine. All I get is an overexposed white wash except for the brief moments I go under an underpass. Note to Tony: I finally understand what you were telling me about mirror view. It was on so I didn't realize it.

I-40 in places is missing big pieces for a stretch along here. One sign even said "Potholes Ahead - Use Caution". Sandy got a kick out of the name as we went by the Bucksnort exit. It must be something to put that in your return address.

I was getting very tired but the truck parking in the first Rest Area was full. I continued on, dodging the potholes. Soon, the GPS started trying to route me up to I-55. It was adamant that I leave I-40 but, after checking avoidances were set properly, I couldn't figure it out. Eventually, I tweaked to the fact that when I downloaded the areas of the new maps, I missed Memphis. Where the city should have been was a white area with grid lines. It looked downright spooky but, chancing the unknown, I cancelled the route and stuck on I-40.

We stopped in a Rest Area before Memphis and I climbed in the back and got an hour of shuteye. Then it was on through Memphis rush hour, which looked pretty bad for the people going the other way but was no problem for us. We crossed the bridge into Arkansas without incident. 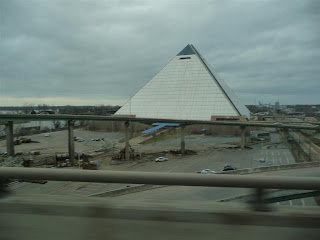 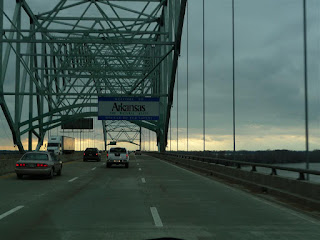 Welcome to Arkansas across Ole Miss'
The GPS had a jog in the middle of the bridge where I reconnected with the downloaded maps again. Luckily, there was no such jog in real life. The Mississippi was high and some adjoining lands were flooded. And I wonder why bridges in Arkansas are so rough?

We stopped in Forrest City, Arkansas, named for Confederate General Nathan Bedford Forrest. First, we fueled up at a Shell and then repaired to the local WalMart, parking behind a Class A from Michigan. We went in and bought vitamins and water and then finished the last of Jean's leftovers and had some more pound cake.

I spent a little while figuring out the TV and antenna but we got it done. I need to add the 12V option so I don't always have to run the generator. I do like the High Def broadcast signals, though.