I have just taken two bus trips. My first in 40 years and my last. But I am getting ahead of myself.

It all started the day before yesterday. You will recall we decided to take a Greyhound bus to Alabama to claim our motorhome and bike at Blondy's. The bus won out because of the extremely low cost. After a busy week of getting the to-do list completed, I had finished my packing by 7:00 PM. Sandy was already done, as usual, but I normally pack at the very last minute and now I know why. Being all done and then waiting leaves me at loose ends. On the plus side, with our two big suitcases and carry-on luggage, everything we planned to take just fit. I had to swap Sandy a few of my heavier camping guides in return for some lighter stuff to keep my case under the 50 pound Greyhound limit. 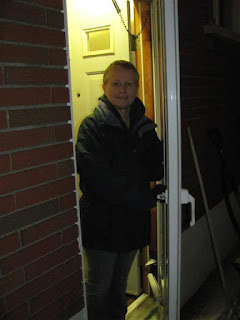 Sandy going out the door
It had snowed so I shoveled a path to where Sandy would get into Gary's SUV because she was wearing sneakers. He was there right at 11:00 as planned and ferried us to the run-down Sudbury Greyhound terminal. Our bus wasn't scheduled to depart until 12:50 AM so we were there way early. Buses rolled in from the west and were taken away to be serviced, so we spent the time talking to people who had just arrived and were waiting to reboard. This included a man from Fort MacMurray going home to Hamilton and a Korean War vet traveling from Calgary to Cobourg who was 50 hours into his trip due to a breakdown in Regina.

The bus pulled in at 12:40 and we loaded our gear and climbed aboard. It was almost full and a young lady helped me figure out how to adjust my armrest. The lights dimmed and we were rolling at 1:00 AM on the great adventure. When we stopped for a break at the Tim Horton's south of Parry Sound, it was 2:49 and pouring rain. So much for my friend Dave's plan to go snowmobiling in Bracebridge this weekend. We were back on the road by 3:10 and I slept most of the way to our first Toronto stop at Yorkdale. Then it was on to the downtown bus terminal, where we arrived at 5:30 AM, 20 minutes early.

We had three hours to wait for our bus to Detroit and all the eating establishments were closed and the WiFi wasn't free, so we just sat around and watched people come and go. We did talk to a lady and her daughter returning home to Sarnia from Sudbury, where the slightly built teenager had won her class in the all Ontario wrestling championships. One restaurant opened at 7:30 so we had a light breakfast. When we were done, I noticed a line at our gate even though there was no bus yet. Here I learned the first important lesson. Boarding a Greyhound is first come, first served so as soon as you arrive, find your gate and line up. 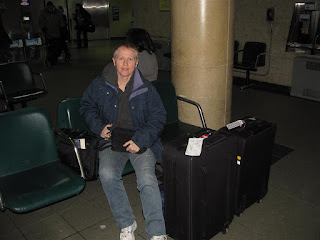 Sandy in the Toronto terminal 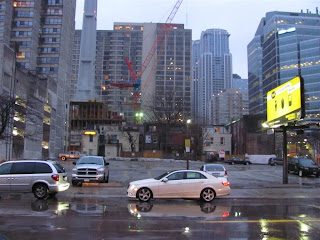 View from the Toronto terminal
This bus was a new one. It had WiFi and 110V power at each seat but, strangely, the seats were quite firm and not that comfortable. It was raining when we pulled out and the visibility was marginal, but the driver did a good job and got us to London 20 minutes early while I played on the Internet via our rolling hot spot. All was going according to plan but that was about to change.

We changed drivers in London and our new driver was 20 minutes late getting us on the road. This was a concern because we only had a one hour layover in Detroit and they had only scheduled ten minutes for the border crossing. This bus took the back roads through all the little towns but the only stop was in Chatham where the driver spent fifteen minutes in the terminal. As a result, we arrived at the border a half hour late.

The ten minute schedule for the border crossing was just plain silly. There were ten of us on the bus and they took us all inside for the 3rd, 4th and 5th degree. They wanted to know where we were going, why, how long and wanted all manner of details that I don't normally have to provide. Then they searched the luggage. By the time this was done, we lost another half hour to the schedule and we pulled into the Detroit bus station just in time to see our 3:30 direct bus to Birmingham leave through the other gate.

I checked at the counter and they told me the next bus was 10:30. Yikes. Seven hours in the Detroit Greyhound terminal with no restaurants or WiFi????? I spoke to Blondy and let her know our 6:45 AM Birmingham arrival was out the window, while Sandy met and got talking to a young lady from Minneapolis on her way to a fashion show in Hamilton. That is one good thing about bus travel. You meet lots of nice people. While wandering the terminal, I saw that a 5:50 bus that included Birmingham was sold out so I went back to the counter and asked about stand-by. A different lady marked our tickets and told us to line up at Gate 6. I asked if we should wait until the regular passengers got on and she said that when the bus arrived, we should get on it. We were second in line and I was happy. OK, happier than I had been.

We met more people while waiting in line including Jack, a retired Chrysler worker going to visit family in Athens, Georgia. We all waited for the bus as 5:50 came and went. Why oh why was our original bus the only one to leave on time? The bus finally arrived, delayed it appears because they needed to call in a backup driver. On the way to the bus, we were questioned by two Border Patrol officers. I thought we were done with that at the border. One of them, checking our passports, asked if we had Form I-94's. He said that was written permission to travel more than fifty miles form the border. Never heard of it. Then his partner said they weren't necessary here and the first apologized, explaining that he has just relocated from  the Mexican border. The bus, with Zack driving, rolled out at 6:40 on wet, snowy and partially icy roads. Unlike the original bus direct to Birmingham, we would have to transfer in Nashville because this one was going on to Memphis.

We rolled through the night, napping (you don't really sleep on a bus). Zack went through his welcome spiel with all the panache of a stand-up comic. We stopped in Toledo, Dayton and Cincinnati. There we all got off the bus and Jack and some others transferred to one that would continue down I-75 to Atlanta. Reboarding, we had a new driver and some new companions. In Louisville, we were out of the snow but it was still cold. We arrived in Nashville at 5:30, right back on schedule, and quite a few of us got off to await the 8:00 Birmingham bus. We immediately lined up at Gate 2 behind a crowd of people. Although we were worried about the number of travelers, we found these guys were soon out of here St. Louis bound. One driver said we didn't need to line up yet but we've learned how things work. The next unravelling came soon after when they said the 8:00 bus wouldn't arrive until 9:30. Grumbling, we stayed in line and waited. 9:30 came and went and, while buses arrived that would head to Memphis, Atlanta and one more to St. Louis, Gate 2 stayed empty. By 10:00, tensions were running high and the girls at the counter were getting defensive when they were finally pushed to admit they didn't know where the bus was but the station manager was on his way (on a Sunday morning) to deal with the situation. Before we could go Libya on them, the bus magically appeared, we boarded and were on our way. I spoke to Donna for the fifth time with our revised ETA. A couple of stops and we finally pulled into Birmingham at 2:53 PM. That was 37 hours. 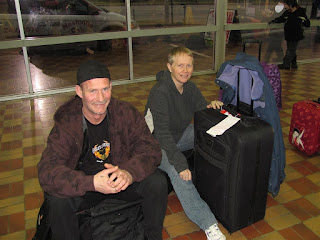 Waiting in Nashville
I understand the problems inherent in managing transcontinental bus schedules but failing to keep us informed in Nashville was very poor customer service. Then again, I hear the horror stories of airline passengers being held on the tarmac for hours and realize that any transportation where you are not in the driver's seat leaves you open to this type of thing.

Off the bus, there was Blondy. A sight for sore eyes. We caught up on the drive to Centreville and went to the buffet at the River Bridge Restaurant for supper. Then it was on to the house to make friends with the dogs and get the motorhome ready to go. It all went well (the tires even had the right pressures in them) except for the kitchen faucet, which spewed water all over when you opened it. Hooking the trailer up was trickier because we couldn't get the wheel off the front jack after it was hooked up and had to dig a hole in the ground to get enough clearance. I touched cyberbase with my Email and VROC and found I had blown up in the NASCAR Fantasy Pool. Then it was off to bed after having a piece of the pound cake Blondy made for us to take with us. 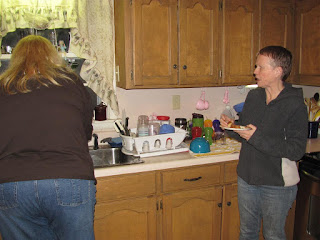 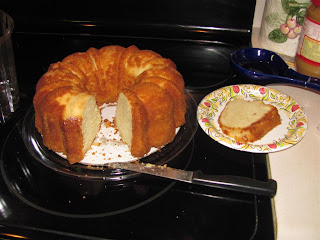 Glad you enjoyed your trip on the froot loops cruise! And you thought your friends up here were unusual!
Not all expolded in the pool some of us got real lucky and guessed blindly and hit a target!
Be Safe