We woke up to big rain this morning. I guess we should have hooked up the trailer last night. Al helped me as we navigated around the yokel that parked almost in front of the tongue. Some people's children.

We had the continental breakfast and spoke to a young couple from North Carolina who were on their way to visit Deal's Gap for the first time on their Harley. Their enthusiasm and youth made me think back to our first road trips in the 1970's. I wish them well in their motorcycling life together.

We headed out on I-64 for Monticello, where Thomas Jefferson had made his home, at 8:30. The rain was coming in waves, first light and then torrential. 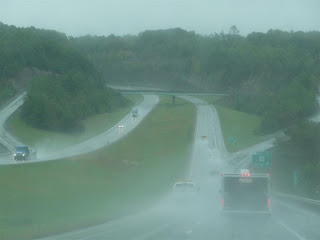 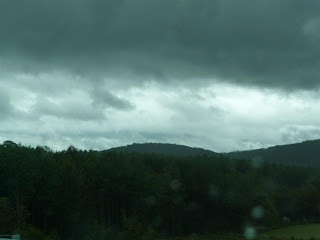 At one point, we drove completely out the rain and stopped. After a group discussion, we decided that we would skip Monticello and head straight into Williamsburg. Al called and the motel said our rooms would be ready. 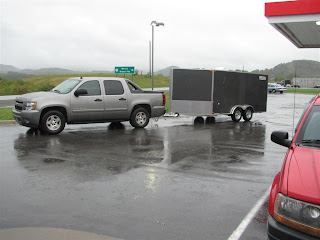 The rain stopped for a bit

As soon as we restarted, the rain caught us again. It was heavy and we had some traffic tie-up where we doubled up with I-81. We stopped at a Cracker Barrel in Waynesboro for lunch. I had an Uncle Herschel's Special, which was way more than I needed and made me sleepy. The rain continued all the way to Richmond, where it was heaviest and there had been tornado watches. Finally, the last few miles, it let up and we arrived at the Rodeway Inn in the dry. 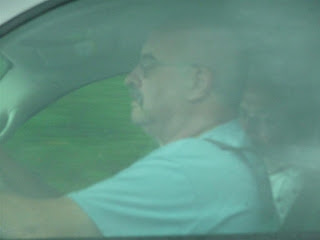 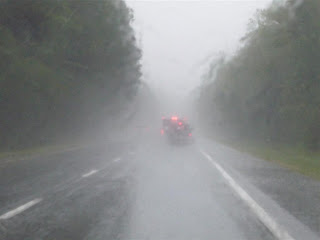 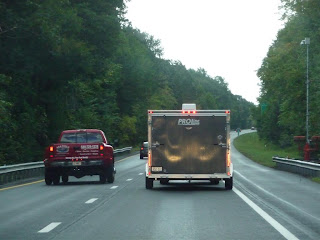 And dry again as we approach our destination 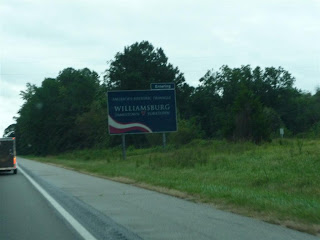 We found Biker, Trucker, Julie, Cheap B, Southern Draw and Southern Comfort sitting out front waiting for us. Manager Suresh told me where to put the trailer but it started to rain heavily so we decided to wait before unloading an unhooking. 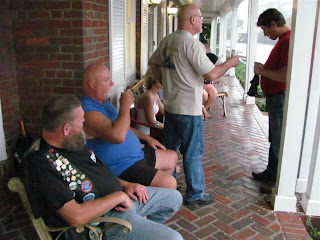 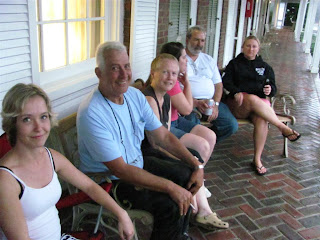 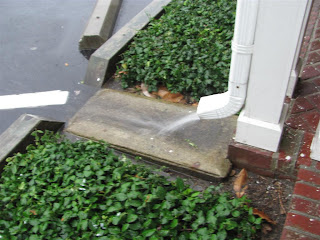 Rain pouring off the roof

The rain let up and then we unloaded the truck and took the bikes off the trailer. Then I moved it to where Suresh suggested, unhooked and parked the truck.

We joined the early crowd for supper at the 2nd Street Restaurant. We drove at first but, after I came back to the motel to secure my computer, I walked back because it turned out to be almost across the street. Back at the motel, we hung out for a while before going to bed.