There was no big rush this morning so we didn't get to the breakfast nook until 9:00 AM. We are never this late and found out why it isn't a good idea. The tables were all full with a seething mass of late rising humanity. We won't let this happen again.

I went out and checked the tire pressures on the bike, adding a couple of pounds to each. Then I checked the oil which had been hovering around the low end of the dipstick for a while. I broke out my trusty container of Amsoil 10W40 and added a few ounces, being careful not to let anyone else see. Heather and Tom came out and removed and folded their covers as we prepared to ride the area of Michigan known as The Thumb. 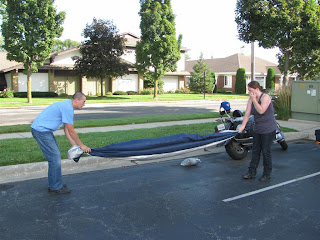 We rode north out of Frankenmuth before turning east and heading for Harbor Beach as a first way point. This was a retrace for Heather and Tom since they came in this way on Friday. Today I, for the first time ever, rode through Bad Axe as we faced a headwind from the east. A line of clouds to the south told us we were on the edge of 'something'. Since we arrived, nasty weather has been sliding by not far south of us but we have done well. 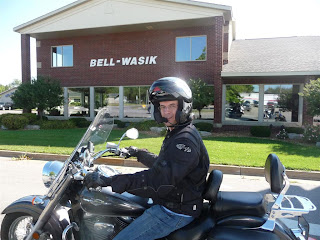 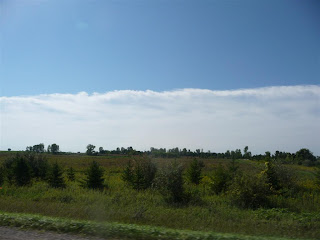 Cloud line to the south of us 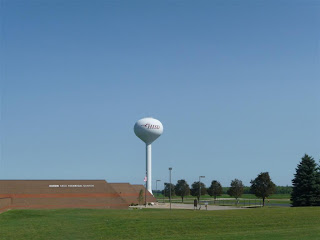 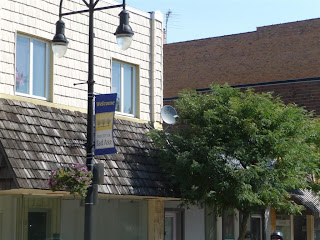 As we approached Harbor Beach, we saw a large crane and a partially erected wind turbine. But just one. Then we saw a sign saying the M25 was closed north of Harbor Beach and a detour was necessary if we wanted to go north. We went into town for gas and then returned to the detour on Ruth Road. As we rode north, we saw the lower sections if quite a few incomplete turbines, a very unusual sight. At the northern end of the line, there was a smaller crane which led me to believe the large crane required to complete the towers had just arrived. 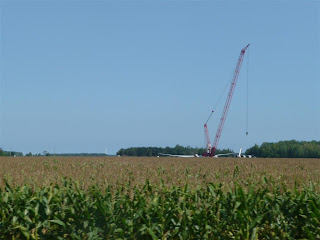 After finally reaching Lake Huron, we started north following the shore. This is a pretty area as the road  winds through several lake shore communities. In Port Austin at the northern tip, we parked the bikes and wandered the small downtown area before stopping at the Sportsman Inn for lunch. 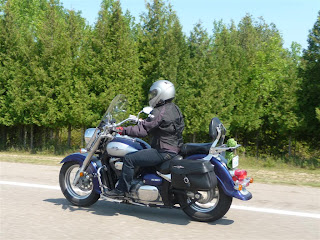 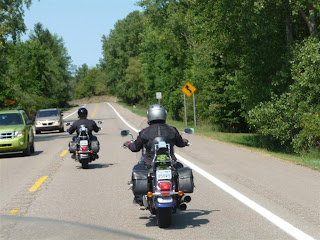 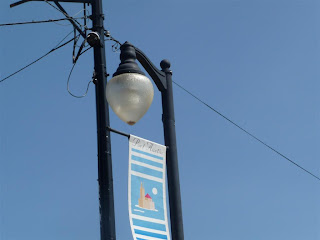 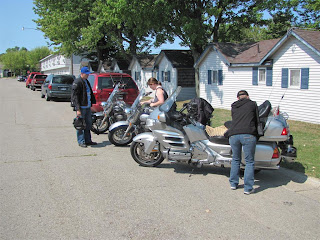 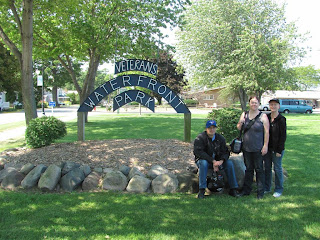 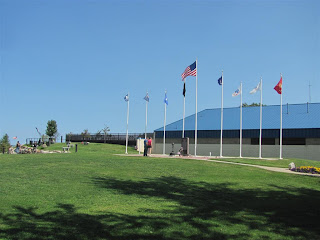 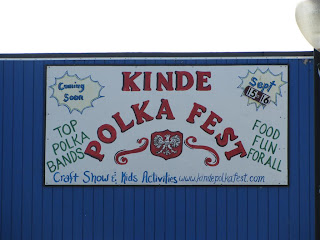 After lunch, we continued on. The Saginaw Bay side of the Thumb had a steady line of sandy beaches with many people enjoying the sun and surf. It looks like a great place to spend a summer. Then we stopped at a rest area for a bit and we talked to a couple from Windsor for a while. 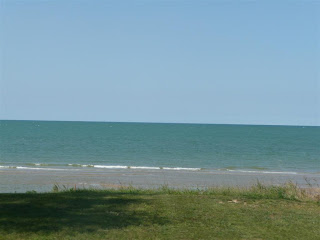 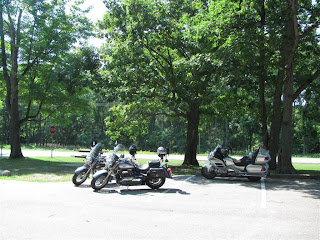 Taking a break in a Rest Area

We followed the road almost to Bay City before turning south through the fields. I have concluded that most of the Thumb is flatter than Saskatchewan but has a great shore and grows a variety of crops. Back in town, we stopped at Tim Horton's for various cold options. The real fruit smoothie gave me a severe brain freeze. 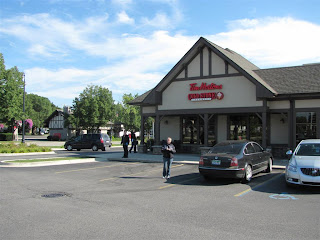 Back at the hotel, we swapped our riding gear for tourist clothes and walked downtown to Zehnders for their famous all you can eat family style chicken dinner. It was probably more than we needed but we wanted to get the full Frankenmuth experience. We lined up but it moved quickly (a 1,500 person seating capacity helped) and we had a table in a few minutes. Our server, Eddie, said that it was OK if three of us ate family style and Tom ordered shrimp a la carte. He brought apps (remember when this meant appetizers) for all of us including noodle soup, cabbage salad (coleslaw), chicken liver pate, cottage cheese, cheese spread, garlic toast, breads, fruit preserves and cranberry relish. Then the main course arrived for three of us. Fried chicken, mashed potatoes and gravy, dressing, buttered egg noodles and seasoned green beans. Dessert was soft serve ice cream. I had vanilla and orange sherbet which tasted exactly like a Creamsicle.

After supper, we went back to the hotel room and watched the NASCAR Sprint Cup race from Atlanta. I had four drivers on my fantasy league team but lost a lot of interest after one lagged badly and two ran into each other. With visions of stock cars dancing in my head, I fell asleep.