I decided this morning that we would head for Lee, Massachusetts today and reserved a room at a Super 8 that had four stars. That is rare. And the points were still X 4. We enjoyed the continental breakfast and they even had bread so I could make toast.

We rolled out about 8:00 AM and crossed from Pennsylvania into New York and onto the Thruway. The EZ-Pass is great but I still have to go through the manned booth in NY so they can set the number of axles due to the trailer. Just out of town, we encountered some rain and I turned on the wipers. They moved part way through a cycle and stopped dead. Then they, by fits and starts, returned to the starting position after about two minutes. A stop at the Angola Service Center convinced me that whatever was wrong, I wasn't going to be able to fix it. Luckily, at speed, the rain beaded and blew off the windshield. 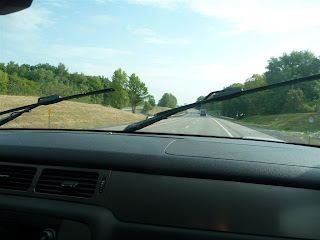 We stopped for a break at the Pembroke Service Center east of Buffalo. In the men's room, there was an older man (older than me) standing at the urinal. In his free hand, he was intently studying something on the screen of his smart phone. If I ever have a smart phone, I hope that I am able to set it aside for basic bodily functions. Then we lined up at Tim Horton's to get coffee and food. The Timmy's here are as popular as at home because this was the only place among several open establishments that had a line. We discovered that they have different food too, including some very nice paninis.

We continued on the Thruway, sliding through more rain near Rochester. One of the benefits I had hoped for when hauling the bike was windshield wipers. Apparently, I was asking for too much. I also found that large vehicles in Thruway Service Centers have a choice. They can park or they can get gas. Once they commit to one, they can't get back to the other in the same stop. We fueled at the next one, a Mobil, where a note on the pump told me that my credit card would only work once per day. No double swiping if the pump went over $100. If I needed more, I would have to prepay inside. Damn.

We stopped at another spot near Albany and I searched the Internet for Chev dealers near Lee with the hopes that I could get in tomorrow morning and get the wipers looked at. The first one I called couldn't see me until after lunch and the young lady wasn't optimistic about parking the trailer. The second, Center Chevrolet in Springfield, was much more accommodating. Paul said to come in when I could make it and there was a shopping center right behind them where I could unhook the trailer.

The truck started working from here as the south wind changed to come directly from the east. I put it in 3rd gear and set the cruise at 55 MPH as we approached Albany. The Thruway switches from I-90 to I-87 around town. The whole I-87 stretch was under construction with concrete barriers alongside the road. Finally, we switched back to I-90 and  turned east across the Hudson River leaving the barricades behind. 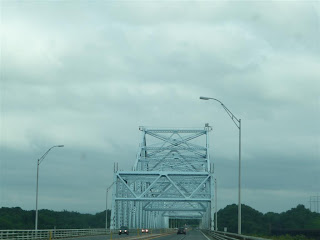 Bridge over the Hudson River on I-90

It started spitting at the Massachusetts state line as we started climbing and descending through the Berkshires on the Mass Pike. Lee was at Exit 2 where we got off and the Super 8 was close to the exit. It had a smaller lot but was big enough for the two semi's there already plus our rig. There were also several corporate looking pilot cars in the lot. It was a nice place with new furniture and lived up to the four star rating.

We walked across the street to Friendly's Restaurant for supper. We both had clam chowder while Sandy had a Caesar salad followed by ice cream and I had what they called a turkey bacon supermelt with fries. It was good but I dripped some cheese sauce on my shirt. Bback at the room, I worked on my bills and did a little blogging about Frankenmuth. I may never get caught up.

We did see on Facebook that Mike and Kim had taken granddaughter Jolene to school for an hour to meet the teacher. She will be starting full day junior kindergarten on Thursday. And she won't be four until December. 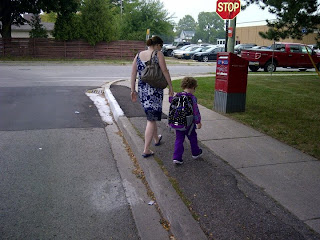 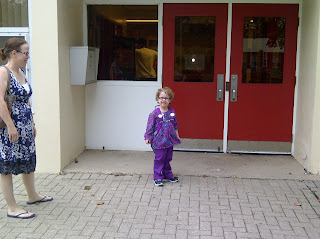 Small world. We stayed in Lee at America's Best Value Inn during our concert trip in November 2010. Four stars it was not :)