Sandy and I were up just after 6:00 AM this morning. We took the big suitcases down to the truck and then moved it into the back lot to hook up the trailer. Returning to the room, I went on line and booked a room at a Super 8 in Erie, Pennsylvania (counting  towards the 4X Wyndham Points deal). Then Heather and Tom joined us in the breakfast nook, which was, at this earlier hour, much quieter than yesterday. After breakfast, I loaded and tied down the Wing while Heather and Tom loaded their gear on their bikes. We rolled out moments after them at 8:25. 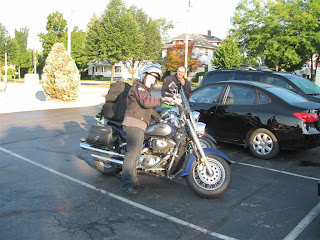 Heather and Tom ready to roll

We went south and cut over to I-75 at Birch Run. I fueled at a Meijer before hitting the entrance ramp to the slab and setting the cruise control. I was trucking along under the cloudless blue sky when a speck appeared in the air above us. I don't know what you call one of those motorized parachutes but that is what it was. Perhaps he was commuting to work? 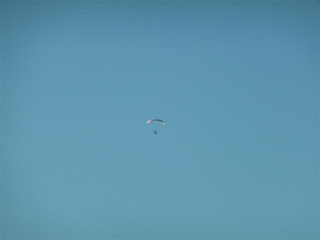 I find that on relatively flat land, I can't tell up from down except by the way the truck engine is working. At times, I will swear I am going up but the engine is freewheeling while, at others, it looks like I am losing altitude but the transmission downshifts. I'm not sure why this is, but it confuses me.

The wind was out of the south and east. We were going south and then east. Good thing. I would hate to ruin my perfect record of never having a tail wind help me along.

We stopped for a coffee break at Milan, Michigan. The exit was spooky because everything was new. Fast food, gas stations, houses. All fresh and shiny. This must be the OTHER Michigan. Across into Ohio, I realized that US 23 does not have a direct interchange with I-80 so we had to loop around Toledo to get onto the Ohio Turnpike.  We stopped at the Service Center in Vermillion, Ohio and got some Popeye's chicken to go. This was a first for us. Five pieces with Cajun fries and a biscuit. I thought it was pretty good compared to KFC but Sandy doesn't like anything with spices and our mild pieces accidentally had one hot piece mixed in. 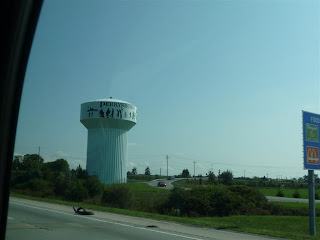 Lots of activities in Perrysville Ohio 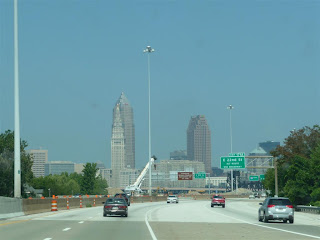 Leaving 80, we rolled mostly south of Cleveland on I-480. I could have gone further and cut north on I-271, avoiding downtown altogether, but swung north on I-71 instead and caught the last bit of the urban area. I usually stick to I-90 but will probably go south in the  future. Traffic is a lot better.

We fueled at a Sheetz in Mentor and then we rolled on the Erie where we made a stop at Walmart for water and some other supplies. Then we moved on to the Super 8 at  the next exit. We have never stayed here before but it has lots of parking. It was, however, a little on the run down side. There is no food within walking distance, so we had Domino deliver a crispy thin crust pepperoni pizza (easy on the sauce).

I am finding a lot of motel properties worse for wear these days. I suspect that the number of guests are down as the gas prices and general economic situation cause more people to stay close to home. With reduced revenues and the same fixed costs, the budget gets balanced by forgoing some of the normal sprucing up of the properties. I haven't had this confirmed but it makes sense to me.

Sandy was playing with the TV when she discovered an ABC Family ad saying there would be a new episode of Switched At Birth at 8:00 PM tonight. We have watched twenty episodes of Season One and then they took a break before airing the last ten. That started tonight and we caught it by chance. The PVR isn't programmed to record this at home so we hope we can find ABC Family every Monday night when we stop.

I called the Sudbury Inn and found they still thought Ron and Laurie were going to be in Room 21. I hope they get it sorted out. I also called Rabbi (Tommy, not my brother Dave) and we discussed some recreational firearms activities for WWR. Then we turned in for the night.