At 6:45 AM, we had the truck loaded and were just waiting on Mal and Yvette. The convoy today would consist of the Avalanche with Al and I towing the two Wings, Sherm's truck with he and Sandy towing his Harley and Mal's truck with he and Yvette towing his Connie.  The drizzle had returned. Sherm and Sandy headed for McDonald's in Berryville and we followed when the rest were ready. 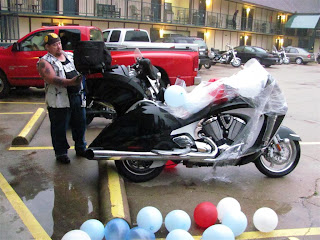 Rem must have left the Vision unguarded

After a quick breakfast at Mickey D's, we followed US 62 east to Harrison and then took US 65 south. About an hour out, we made a comfort stop at a gas station. Every vehicle parked outside Grice's was a pickup truck and, although the outside didn't look like much, reports were that it had a very good looking buffet and awesome restrooms. 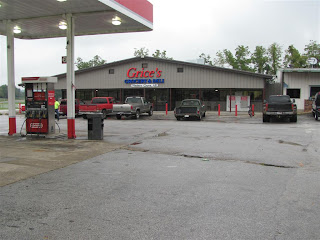 More than it looks 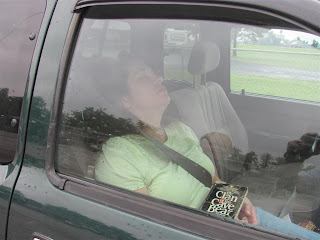 It was foggy as we trucked south up and down the winding hills. It was also very apparent that the expert opinions on weight loading in a two axle trailer weren't exactly spot on. Instead of the rock solid feel I was used to, the truck was swaying from the rear in some corners and bumps, a sign of too little tongue weight. It was manageable but not much fun so we didn't bother going to all the trouble of moving the chock at this time.

There was on spot where we came around a corner and found a bus driver had not had a good day. It looked like he had snagged the shoulder and slid off the embankment. Lucky for us they hadn't started to extricate the bus yet because that would tie the road up for a while. 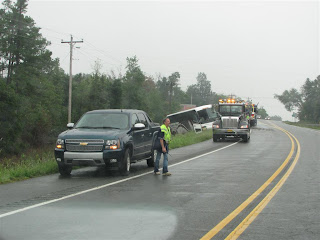 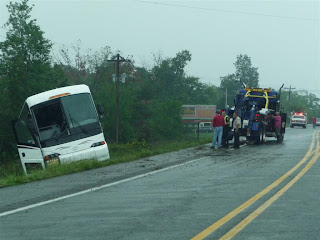 He really bushed it 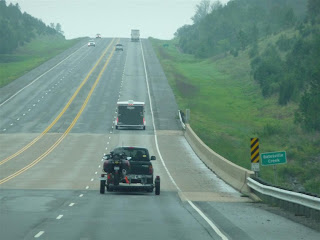 We made another comfort stop on 65 where Mal and Yvette got ice cream and Lucky Al showed me what wisteria looks like. It is pretty and also impassable. 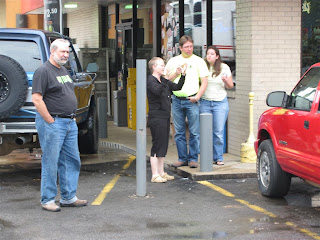 Some of us got ice cream 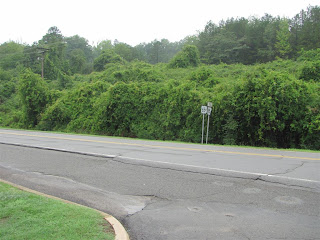 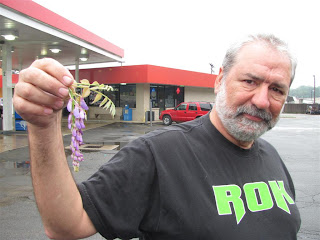 But the flowers are pretty

We reached I-40 in Conway and drove on through Little Rock. At a fuel stop, I was getting frustrated enough with the trailer that we took Mal's heavy cooler from his truck and put it right in the front of the trailer. It helped quite a bit.

For a stretch, we were limited to one lane each way in construction. On the westbound side, there was a vehicle broken down with a state trooper trying to figure out what to do about it. The stopped traffic behind them went back well over five miles. Better them than us. 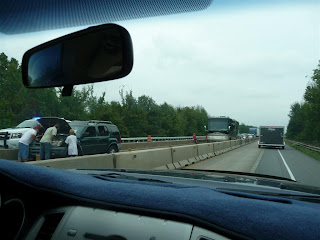 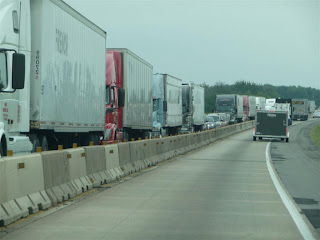 And the miles of unhappy drivers

We passed a billboard advertising an adult world factory outlet but didn't stop. We did stop at a Love's truck stop for lunch. Some had Chester's Chicken while Sandy and I had Subway. Continuing on, we saw a sign for the Clement Railroad Hotel Museum, a place we will have to visit on a future trip. We crossed the Mississippi River at Memphis and entered Tennessee (the prettiest state in the land of the free). 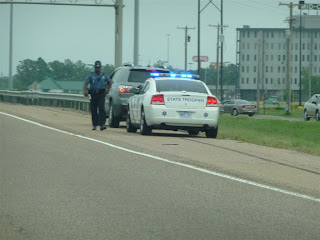 Someone didn't quite make Tennessee 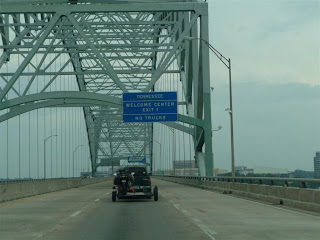 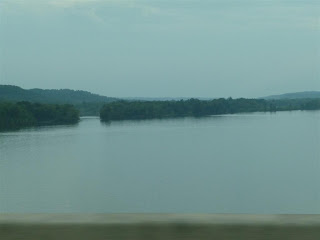 There was another break at the West Tennessee Welcome Center and were surprised to find some museum exhibits. It seems this area was the source of a lot of good music over the years. This facility is not affiliated with the state in any way. 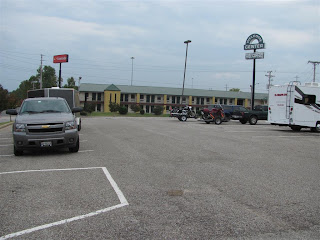 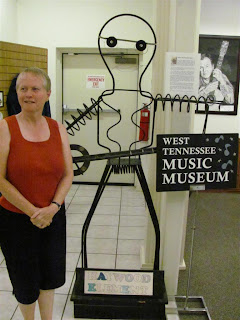 This guy was on the same diet as Sherm 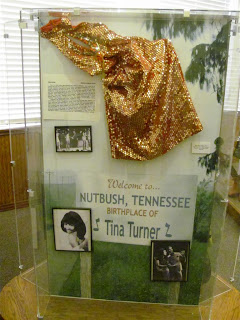 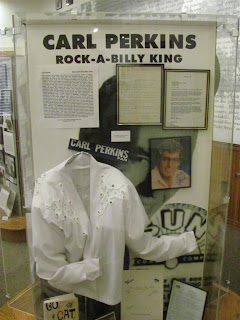 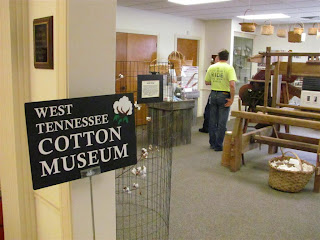 Never saw a cotton museum before

One more fuel stop at a Flying J let Sherm get a new mug to replace the one that he lost and I ran over south of Blue Eye. Then we drove through Nashville as the sun set. Sherm told us that Nashville's biggest business was printing. Who knew?

As we were leaving the city on I-40, we saw brake lights come on ahead of us and then one set did an odd tango. As we got closer, hazard lights flashing so we wouldn't get rear ended, we saw an SUV had spun. It looked like it probably tried to change lanes into a spot that was already occupied and performed a PIT maneuver on itself. Al wanted to stop and assist but the blue lights of the police were already there so we continued. 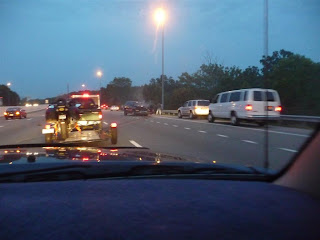 The wreck was on the right

Al called ahead to the Super 8 in Cookeville, Tennessee to see if they had rooms. They did so we made that our destination. When we arrived, it was actually a Red Roof Inn but we eventually found it. Sandy and I had the same experience a few years back in Duluth where I searched all over for a Travelodge that the GPS had found and finally discovered RRI had taken them over.. You think they would get a new phone number.

After checking in, we walked across the street to the Cracker Barrel for a late supper. The food was mostly OK but some needed reheating, probably because it was so late. Our server, however, was very capable. His name was Tanner and he was studying math and business at Tennessee Tech. It was good to see a mature responsible young man considering all the other kinds that we have encountered. 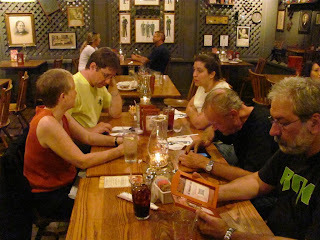 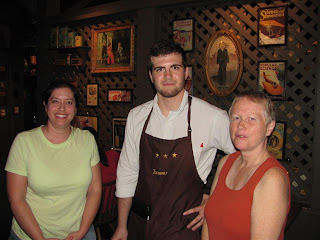 Tanner and the girls

The exit here has more new hospitality establishments than I have seen in one place in a long time. Fifteen years ago there were virtually none, according to a local. Then they decided to no longer be a dry county and business took off. Blue laws can, apparently, discourage the economy.

Several observations today. Sometimes the experts aren't right. The truck runs better in 3rd gear even at 65 MPH without much mileage loss. The GMRS are excellent communication devices, much better than FRS.

Tomorrow we hope to drive to Princeton, West Virginia for a couple of nights, unload and ride the Appalachians.