It was the Ides of September today. It was, as you would expect for the last full day of the rally, raining. The kind that would not be going away anytime soon. A dozen of us who are not right went to breakfast at the Roadhouse. Other than the server dropping a tray of water, nothing unexpected happened. We found out the restaurant had just changed hands which explained some of the confusion both times we ate here. 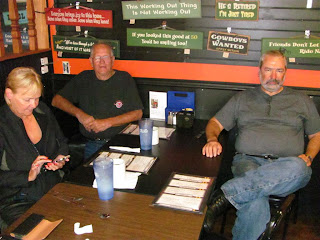 Laura, Bassman and Lucky Al at the Roadhouse 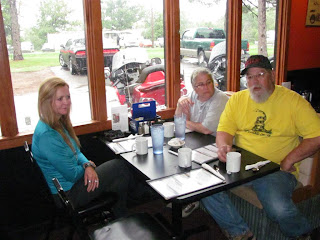 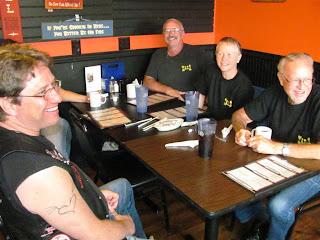 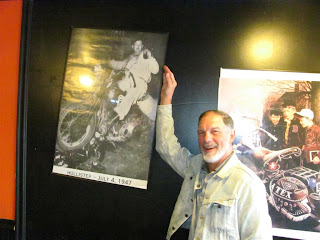 Badger and his role model

After breakfast, Sherm, Mal, Yvette, Sandy and I drove to Walmart in Berryville where we bought two pairs of Cobra GMRS radios for under $20 a pair. We were looking for communication between the vehicles tomorrow as we head across the country and hope these will do the job. The price was right, anyway.  Next, we stopped back at the Arkansas Adventure Rider shop where we poked around for a bit. In the side window there was a 1973 Yamaha RD 350, the successor to my first bike (1970 R5). Sandy tried on some riding boots and, although they still didn't fit, they came closer than anywhere else we have looked.

Back at the hotel, we just hung out all day. The rain let up in the late afternoon and we joined Teri, John, Lucky Al, Mal and Yvette at Sparky's for supper. I had a hamburger with ham, mushrooms and brie cheese on it. It was excellent and the service was quite good, too.

Supper over, we loaded the truck and hooked up the trailer. Lucky Al would be riding with us to Williamsburg with his bike in our trailer. I moved the chock and loaded my bike. Then Hot Sauce proceeded to tell me I had too much weight forward. I bowed to his greater experience so we backed the bike out and moved the chock. In the course of that, the bolt got removed from the aluminum block the chock attaches to in the channel and someone cross threaded it putting it back in. For once, the someone was not me. With my bike moved, we loaded Al's and tied it down. Shortly after, we made our tour of goodbyes and hit the sack fairly early. 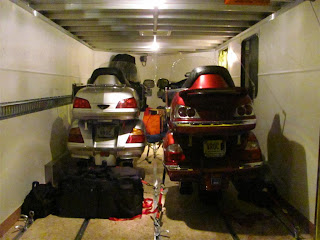