We were up early, reloading the suitcases in the truck and reconnecting the trailer. We talked to Bobbi, the desk clerk, about her impending move to Berlin to be nearer her husband's work and her ongoing problems after contracting Lyme disease. She also told us that this exit, 12 S & N off I-93, was going to be redone with a single set of ramps and a roundabout. It's about time since it is presently very confusing.

We headed out for Epsom at 7:30, first having to go to Broadway Street and then around a block because it was impossible to access either northbound I-93 ramp directly from the motel parking lot. It was quite foggy as we drove up 93 and east on US 4 until we crested a hill and found clear sunlight. 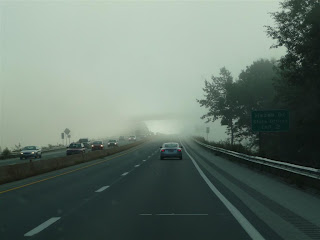 Almost out of the fog on US 4

We arrived at the Circle Restaurant in Epsom to meet the NEVROC contingent but no one was there yet. I parked the truck and trailer out of the way in the back of the lot. At almost 8:00 AM sharp, Ol' Phart, Karen, Lost Bob and Lorie arrived on their two GoldWings. We went inside and ordered breakfast. 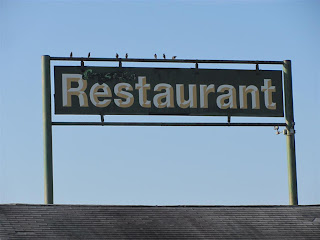 Birds of a flock feather together 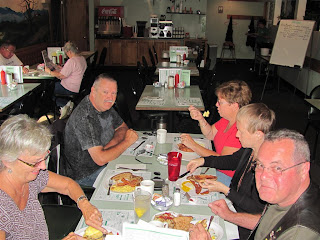 Part way through breakfast, one of the staff asked if any of us owned the truck and trailer parked at the back of the lot. It seems I parked in front of the dumpsters and the garbage man had arrived. I rushed out and moved it before going back and finishing eating. Bobcat, Jewel, their daughter Jess and her boyfriend arrived at 8:40 after some confusion about the times. 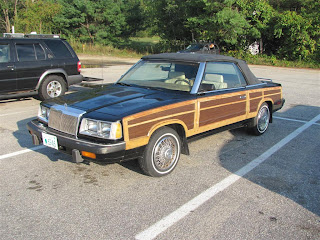 A do-it-yourself woody at The Circle

We left the Bobcat clan still eating and headed out at the posted 9:00 AM departure time. The motorcycles went one way while we took the direct route up SR 28 to 16 and then north.It was 22C and clear as we got going. I forgot the narrow 35 MPH curves on 28 but we managed to get through without holding traffic up too badly.

Near Conway on 16, we came to 1 Wheel Drive, a Kawasaki shop that I had looked up on the web,.and stopped in hopes of getting some of the new Kaw cleaning products. They didn't have any but we found the owner restored old Triumphs. They even have a book about him. His every day ride was a green 1970 Daytona 500, identical to one a friend of mine bought new in the Soo. It was run over by a garbage truck soon after he got it and he graduated to a used 1969 Bonneville 650. 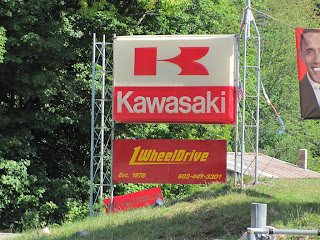 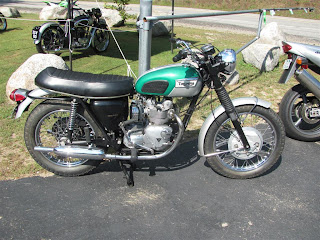 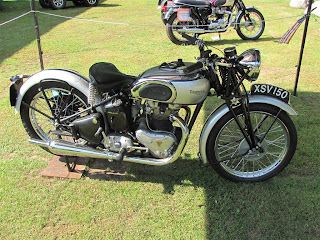 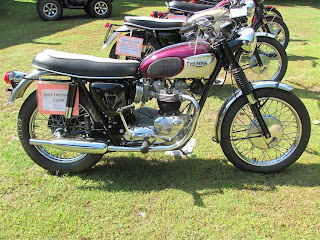 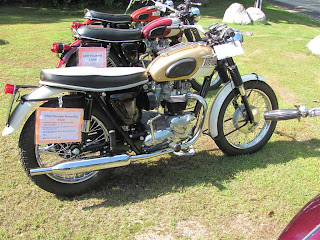 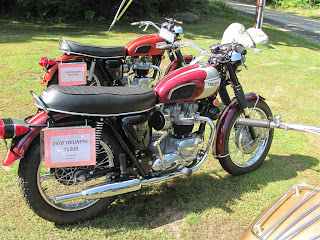 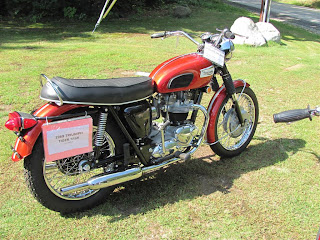 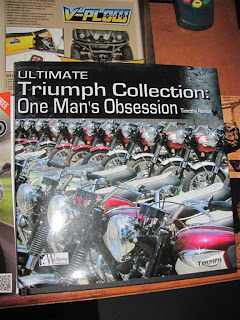 The book about a man and his bikes

In Conway, we made an unplanned stop at Whitehorse Gear. I bought a new head skin (a cap to go under my helmet) because my old one was getting very ratty. I also got two touring books for $2.50 apiece plus a battery tender because I left all of  mine at home. Hudson, the part Newfoundland part standard poodle hound, was up and prowling around. He is a very unique looking dog, and friendly too. 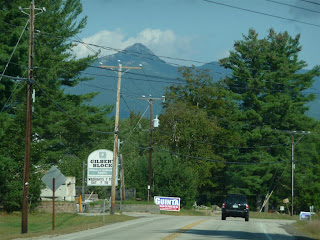 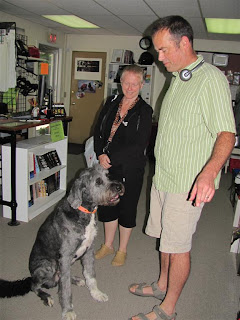 Hudson the dog at Whitehorse Gear

Leaving Whitehorse, I left out a waypoint and the GPS tried to take me to Bethel via Fryeburg, Maine. This was neither my plan nor my desire so we turned around and went back to catch SR 16 north. Leaving town, we nearly ended the trip when we came upon a lady in an Accord trying to make a three point turn below the crest of a blind hill. She had completed the first part on the left side of the road, with the rear part of her car in the traffic lane. A dump truck came over the hill and veered into my lane as did three cars following him. I couldn't go right because the pavement dropped off at least six inches. I was glad to have the trailer brakes as I made a panic stop to avoid disaster.

Driving up to US 2 in Gorham included climbing to Pinkham Notch, a long grade that never seemed to end. I watched the fuel consumption readout drop to 2 MPG as we were down to 40 MPH. We also went past Mount Washington. In Gorham, we stopped at McDonald's for a quick lunch before heading across Route 2 to Bethel.

In Bethel, there was a space across the street big enough for the truck and trailer. We unloaded the bike and moved it across the street just as Ol' Phart, Lost Bob and the ladies arrived. We checked in and carried our gear up to our third floor room before returning to the porch. Steve and Dee arrived by car a few minutes later. After a while we adjourned to the Suds Pub downstairs for drinks. Brad and Judy got there soon after. Dee introduced Sandy to pineapple Malibu's which she seemed to enjoy. Repeatedly. 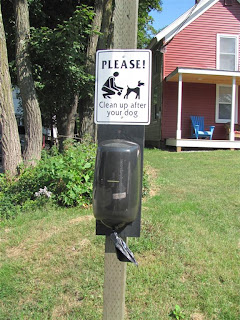 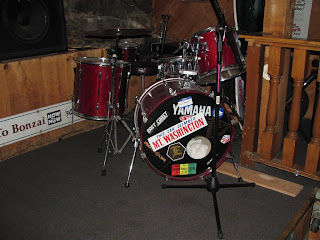 For my drummer buddy, Doug 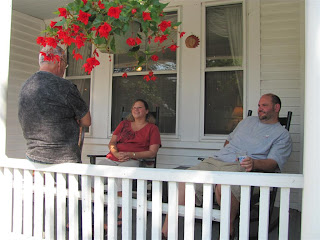 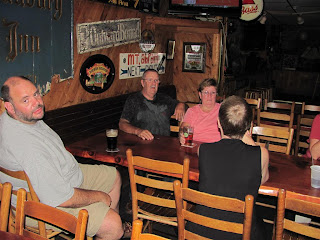 Steve, Ol' Phart, Karen and Sandy at the Suds Pub 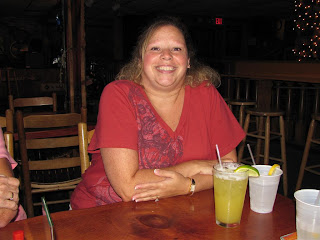 Dee and her pineapple Malibus 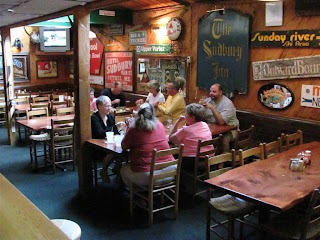 Supper in the pub

We decided to chow down on pub grub for supper. Sandy ordered plain wings while I had a pub club sandwich.  I took a walk outside and got a few photos. A lady from the dining room approached U-Turn and I and told us her husband had a Vulcan. He was wondering if he could ride with us tomorrow. His name was Kevin and I called him to set it up. 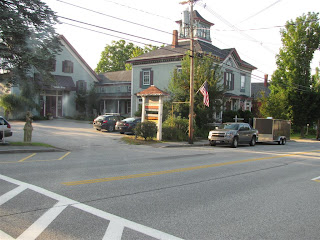 The truck and trailer in repose 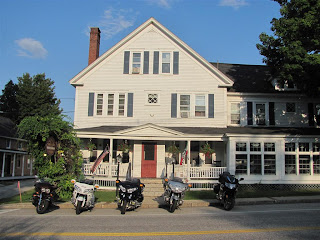 Typical VROC fleet (one BMW, three Wings and a Nomad)

We didn't stay too late at the bar. The local entertainment was a guitar player who fancied himself a blues artist. We disputed the artist designation. Before it was too late, we hiked up to our third floor suite and turned in for the night.