When we pulled into the Ozark Swiss Inn lot, the familiar faces of Sherm, Condi, Penmaker and Grampa D were already there. There was also Jerry, a new guy from Kansas. I unloaded the bike and then maneuvered the trailer to the middle of the parking lot before unhooking it.

We followed Sherm back to Walmart in Berryville to get some water and other supplies. Then we went to Sparky's where Sandy and I split a sandwich for lunch. The menu didn't seem as exciting as the last time we were here (probably ten years ago).

When we returned to the Inn, other people had showed up while we were away. For some reason, my Netbook refused to connect to the motel WiFi. When it did connect for a moment, Windows gave me a message about duplicate names on the network. Then I got disconnected and could not get back in so I broke out my Rogers Rocket Stick and connected to a cell tower. 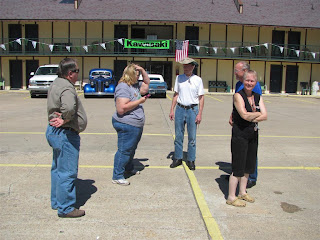 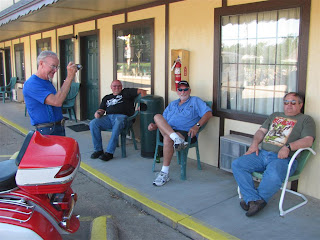 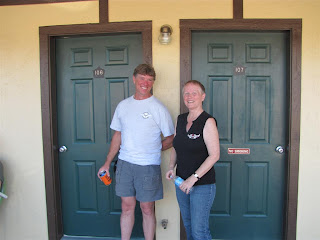 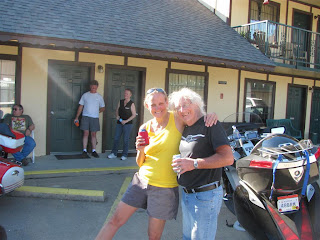 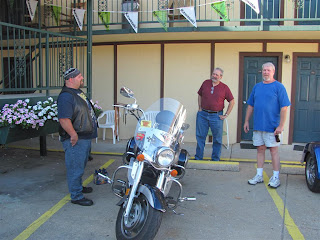 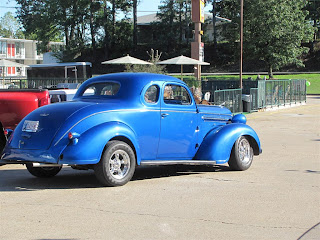 Parked at our motel 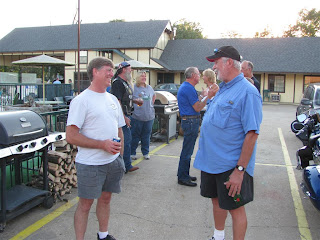 Jamey T and Grampa D with many in the background Hanging out in the lot

For supper, we joined some others at the Rockin' Pig BBQ. It was crowded inside but we found a table. Soon after, we moved outside to the patio because of the loud noise pretending to be music coming from the stage. Lucky Al joined Sherm, Sandy and I although our waitress (who had finally served us) did not take his order. The rest of the crew moved outside as well and their server asked Al what he wanted. Al and the other table got their food long before we did. Our young lady said something about the kitchen being backed up but we were pretty sure the order didn't get put in correctly because everyone else was eating and we weren't.

Eventually the food arrived. Sandy and I split a pulled pork sandwich that was OK and I had some shrimp doused in some kind of sauce that had some bite to it. 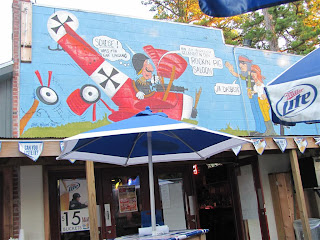 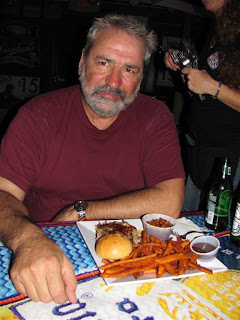 Lucky Al almost smiling because he has food 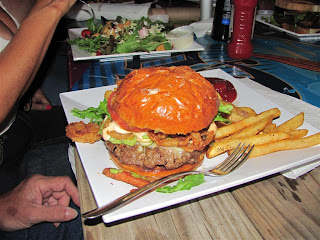 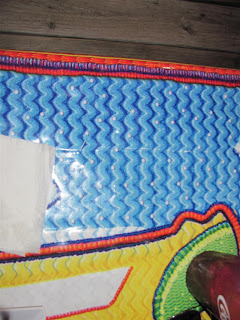 Where Sherm's food is supposed to be 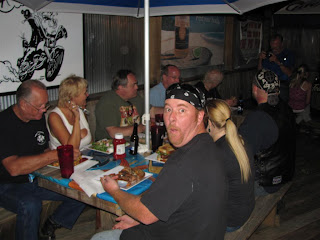 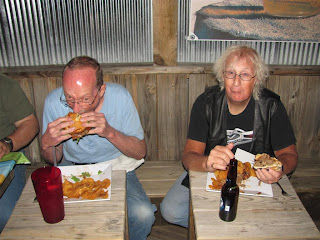 After supper, we returned to the motel and mingled in the parking lot for a while. The temperature and humidity were about as close to perfect as possible. After a while, people started to drift off to bed.
Posted by Jim "Skid" Robinson on 9/11/2012