We woke up this morning to falling rain. I can't remember the last morning we had active rain but then I can't remember the last  morning I had to drive without windshield wipers, either. It's easy to start to take things like this personally even though it is just the luck of the draw. I keep telling myself that. To top it off, I left my windshield squeegee at home.

We left in the wet and traversed the Berkshires on the Mass Pike (as I-90 is known in these parts). The distance between Exit 2 and Exit 3 was a full thirty miles, a surprise in what I thought was the very settled state of Massachusetts. When we got to Exit 4, we had to get off around several police and emergency vehicles because a large 5th wheel had missed the exit and gone off the road. 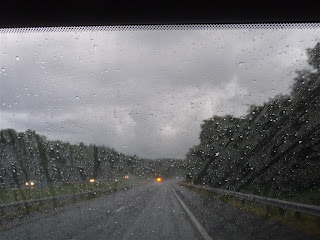 All this rain and no wiper

In Springfield, we followed the GPS to Center Chevrolet. The streets were rough enough in this part of town to remind me of home.  I left the trailer in the Price Cut parking lot behind the dealership and had the truck in the Service Department receiving bay shortly after 7:30 AM. 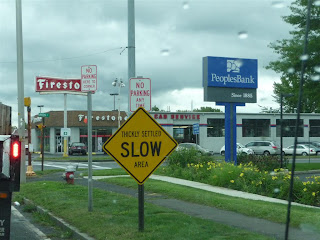 I found Paul, the tech advisor I had spoken to on the phone yesterday. He arranged to get the truck right in and we moved to the WiFi equipped waiting room. I browsed a bit and wrote some stuff. Before long, Paul came out and told us the wiper motor was toast. They didn't have a replacement but another dealer in the area did and it was being shipped right over. The truck was finished and given back to us at 10:20 AM. I was very impressed with the service there.

Before getting the trailer, we drove to McDonald's where we missed breakfast by a couple of minutes. We opted to grab some burgers and then found that there is a period of limbo when they are between one and the other where nothing shows up very fast. Burgers finally in hand, I fueled the truck before returning to the Price Cut lot and hooking up the trailer. This was a challenge because people had strategically parked around it in a pattern reminiscent of a challenge on Canada's Worst Driver. But I am not Canada's Worst Driver and we managed to get extricated without damaging anything. We followed GPS directions back to The Pike and headed for Ron and Laurie's in Londonderry, New Hampshire. 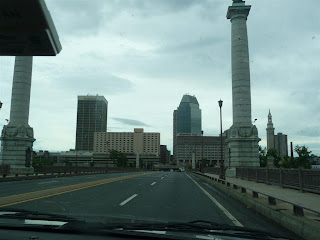 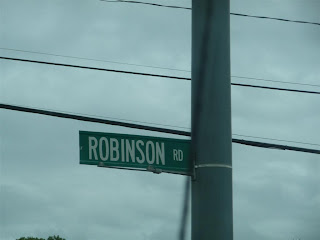 They have some good street names

We left I-90 for I-495 and eventually needed a bathroom break. One particular exit indicated there were gas stations both ways. There was nothing several miles in one direction but, backtracking, we found a station and a Dunkin Donuts several miles the other way.

From here, the proper way to Ron and Laurie's place was to follow I-495 to I-93 and their place would have been near an exit. Instead, I followed the GPS instructions (it seems I will never learn) and got off on US 3 North. This was a nice road but we then had to negotiate quite a length of street level Nashua to get to Londonderry. Other than having to make way for an ambulance and emergency vehicle, we got there without incident. One high point occurred while I was scanning the XM channels on this segment. Channel 90, the NASCAR Channel, was not available from XM Canada when I subscribed. They said it would be available at some undefined time in the future. Well, the future is now. No more missed races while driving.

You may recall that Ron and Laurie were seriously injured in a motorcycle accident July 4th on the Cabot Trail in Nova Scotia. They were supposed to be at the Maine Ride this weekend but would obviously be confined to the house, so stopping to visit was a must. We've shared more than a few miles with both of them, Ron's sister Judy and her husband Brad over the years. They are making progress and are in better spirits than I would be in the same circumstances. Ron even played a video a local had made of him being airlifted from the crash site. It was good to see them and we are really going to miss their company on the weekend. 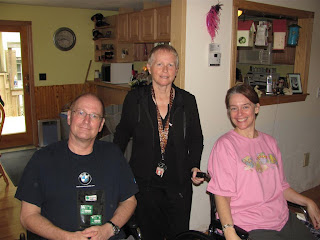 Sandy with Ron and Laurie

Leaving Londonderry, we headed for the Days Inn in Concord. It had a huge parking lot and excellent desk staff. We unhooked the trailer and drove to the Cornerview Restaurant for some supper. I had an open face prime rib sandwich that was pretty good while Sandy had a chicken teriyaki that looked more like a stir fry. After supper, we returned to the motel and I dialed Jerry, an old friend who lives in Berlin, NH, to see if he would be around for a visit. He would so we'll go and see him tomorrow.