A light drizzle caught us again this morning with heavy rain right behind. Sherm, Sandy and I had the motel's continental breakfast, which was pretty slim, while the others walked to a nearby IHOP. By the time they came back, a full blown downpour was in progress. I brought the truck around front and we loaded using umbrellas for partial protection.

The four state ride was going to be out of the question so we called Wrong Turn and told him we would run to Beckley today and then come up and join him and KT for supper at Dirty Ernie's Rib Pit in Fayetteville. 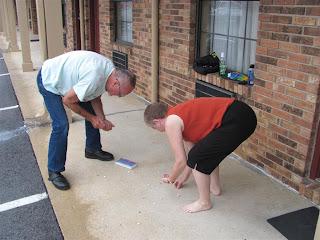 We hit the road about 9:40 in heavy rain. The drive was uneventful until we got to Knoxville. At the point I-40 merges with I-75, I was in the right lane coming downhill to the left. A tanker had just passed us and another big truck was behind him. I don't know what the minivan driver was thinking when he hit the brakes in the left lane but the tanker suddenly locked it up and started steering for the left shoulder while the truck behind him locked it up and started drifting towards me. I stood on the brakes and started to the right, limited by a concrete barrier but giving the semi enough room to avoid the tanker. Then the minivan accelerated away oblivious to the carnage he almost caused. At least our truck and trailer stayed in a straight line when I braked hard on the wet surface, showing the trailer brakes must be dialed in pretty well. 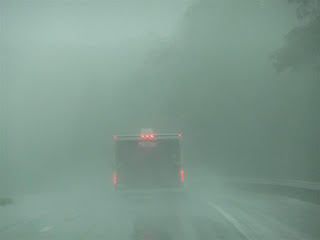 The rain was pretty heavy... 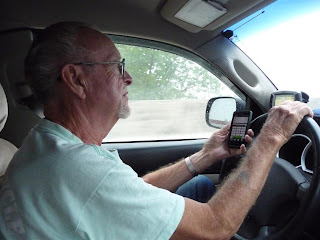 ...but Sherm was driving as cool as ever 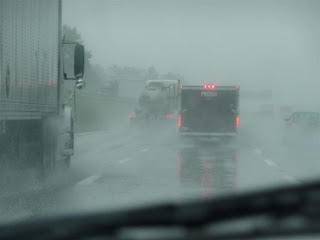 The trucks we were soon to almost tangle with

The other side of Knoxville, we stopped at a Pilot for fuel. It was pretty cramped because a Georgia semi decided to park in the lane around the back where we could have accessed the big rig parking. Sandy and I got Subway and a couple of cookies for the road while the others picked up various things. A trucker said he had come into the rain about thirty miles to the east but by the time we got there, the rain had continued to move and we didn't drive out of it.

Sherm needed a Bank of America so we found one in Abingdon, Virginia. Mal and I pulled into the McDonald's lot to wait for him but, after he went downtown, he insisted that we had to see it so I led a procession down the quaint and probably historic main street. After we got to the other end, I let the GPS select a block to go around. This proved to be another lapse of judgement as the infernal device took me almost straight up a one lane street, down and around a curve that squeezed me between a tree and a telephone pole guy wire and almost up someone's front steps. All this way, the other two trucks followed me faithfully. I was glad to see the stop sign at the main road that I thought that we might never reach. Then we were on our way back to I-81 without further mishap. 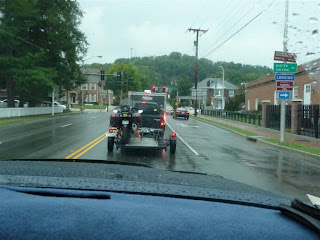 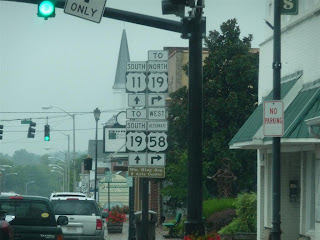 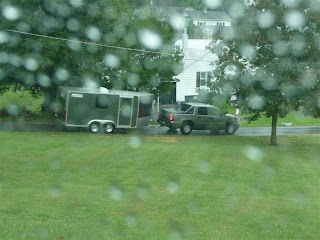 Navigating the turnaround from hell 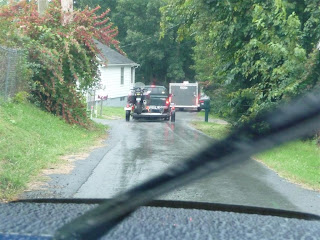 The epitome of a narrow street 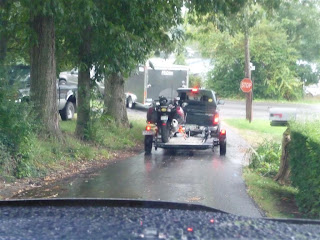 We reached Wytheville and turned north on I-77, passing through Big Walker Mountain tunnel and then entering West (By God) Virginia through the East River Mountain tunnel. We had a long discussion on the radios about the legitimacy of government owned toll roads but, even if Mal thinks they are an abomination, we all paid our $2.00 ($2.50 for Sherm) to the West Virginia Turnpike and made it to Beckley. 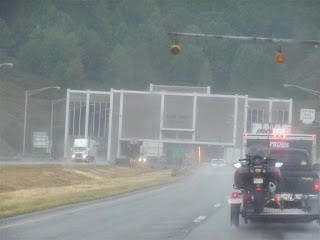 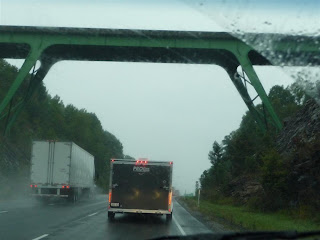 The Microtel was on the east side of Beckley off I-64. It was very nice and we got our rooms straight away. Then we unhooked the big trailer and all six of us piled into the Avalanche (it was pretty tight) for the twenty mile ride to Fayetteville. We made it to Dirty Ernie's Rib Pit at 6:59:58, proving to Wrong Turn that we could get there by 7:00. He and KT were on the steps waiting for us.

Everyone got seated and ordered selections of what I considered to be excellent BBQ. Sandy and I split a half rack of ribs with potato salad and I ordered French onion soup. This might have been a mistake because it was, bar none, the best French onion soup I ever had and I will never be able to eat it anywhere else. The cheese was thick and baked just enough to have the brown spots, the soup itself was very tasty and the bread, although saturated, was crunchy in the middle. They say they deep fry their own home made bread to achieve this. Everyone seemed quite happy with their meals. 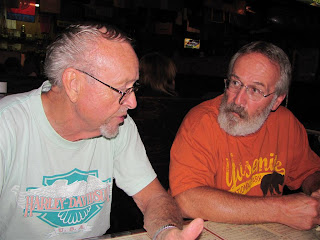 Sherm and Wrong Turn catching up 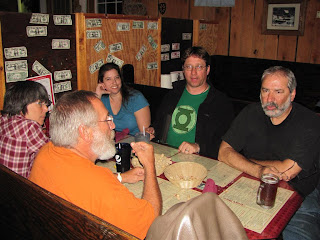 After we were finished, we drove across the New River Gorge Bridge just to say we did, and then drove back across it again. Amazingly, Sherm told me he has never been in this part of the country before. I thought he had been everywhere. We went back to Wrong Turn and KT's house for a while to visit. 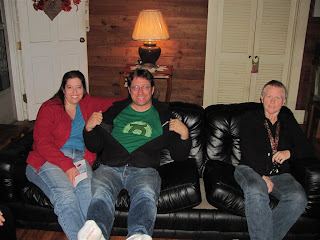 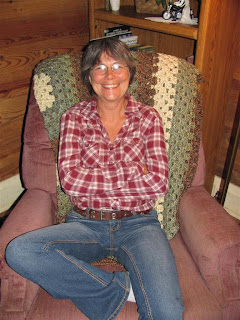 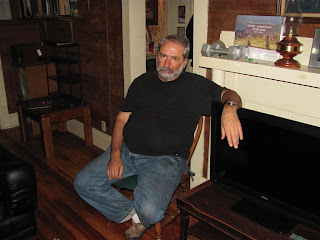 And Lucky Al in a jovial mood

Finally, we said our goodbyes and headed back for Beckley. The rain had pretty well stopped when we got in but we decided to wait until morning before hooking the trailer back up. Everyone headed right to their rooms and we hit the sack right away.