There was a free weekend between our return from the west and the Freedom Rally, so we decided to take the van and head down to see the kids. Since Rhonda had ordered the new tires and could put them on Monday, we loaded the bike in the trailer and towed it down to Wasaga Beach on the way.

After leaving the bike and trailer at J&R, we stopped at a discount gas bar south of Stayner for fuel. It wasn't pay-at-the-pump, so I went in after filling up and gave the young man behind the counter my card. He swiped it, looked puzzled, and then flexed the card and swiped it again. I asked him not to bend the card. He flexed it again and swiped one more time. This time, I raised my voice when I asked him not to bend my card. He mumbled something and then told me the card was declined. DECLINED?? I'm well within the limit and current on my payments.

Calling the 800 number on the back of the card is interesting if you want to talk to a real person. Zero does not work. The only option that does is the one where you want to report a stolen card. Candace took my call and, after verifying I was me and saying the card was fine, proceeded to talk to the kid. Then the charge went through. She apologized. I settled down. I am getting much less tolerant of things these days. Onset of Grumpy Old Man Syndrome?

We continued on to Kim and Mike's in Cambridge. It was a quiet evening. Kim and Sandy went shopping for a while and I took part in a VROC toast to our fallen companions on the VROC Chat.

Kim and Mike had a wedding to go to today and they would be staying overnight. I got this picture as they were heading out the door. Did I mention that she is expecting our first grandchild in December? 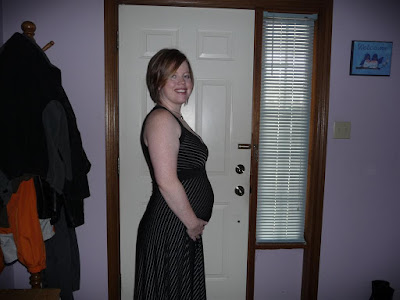 Tom and Heather are engaged and have set the date for October, 2009. Yes, there is a lot afoot in the family these days and we are very happy about all of it. The venue for the wedding/reception is the Black Forest Inn in Conestogo, just north of Waterloo. We stopped by for the Saturday brunch buffet and were quite impressed with the fare. Breakfast included a custom omelet chef and carved roast beef along with many other delicacies. The desserts were out of this world. All this for only $11.95 each.

After eating way too much, we went back to Heather and Tom's where we had a session with the Wii FIT system they have. It gives you quite a workout and, since Sandy already wanted a Wii, I guess we'll have to get the works. But no Guitar Hero.

After visiting and working out, Sandy and I headed back to Cambridge where we turned in early.

It was a slow morning. Heather and Tom came by. Nobody knew what to do, so I suggested we all trek over to St. Jacobs. After a stop at the abbreviated Farmer's Market, we parked in one of the new lots behind St. J. and wandered the streets for a while. We had lunch at an outdoor place that screwed up my order. Twice. Remember how I said I was getting grumpier? This didn't help.

After lunch, we wandered down the street and stopped to listen to a fellow play a Pan flute. He was good and I threw some change into his case. Then we went through a mall I never knew was there, checking out all manner of unusual shops.

The best was one was called Taste the 4th Sense. The photo must be of the old location. I'm not much of a hot sauce fan (or wasn't), but the proprietor has samples and will talk to customers as they try them out. I asked about serious sauces and he turned me on to CaJohn's Jolokia No. 10. There are no extracts in this sauce. The fatilii, red savina and orange habaneros are enhanced with naga jolokia powder. The naga jolokia pepper was recently certified by Guinness World Records as the hottest pepper in the world. It is hard to describe the burning except to say that it was not as harsh as others I have encountered but was definitely more all consuming. For those wanting more, he also had The Source (7.1 million Scoville units) for sale. 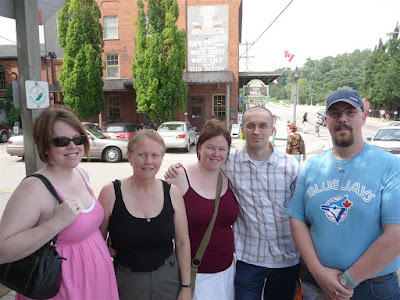 A group photo on the streets of St. Jacobs
Then we picked up some candy in a shop and headed for home. I got some blogging done and we watched a movie before calling it a night.

Mike was on holidays for the week, so the three of us sent Kim off to work. Then we hacked around for a while before I took Sandy up to Staples to check out computers. We walked out with a multi-media HP laptop for her. I also saw a new HP 2133, about the same size as my little Fujitsu mini-notebook but one heck of a lot more powerful. I can see a new computer in my own future.

For supper, Tom was busy but Sandy and I took the rest out. We tried the Cafe 13 Main in downtown Galt. It was interesting but I don't think we can recommend it because the service was not up to par and the food (considering the price) was only average. 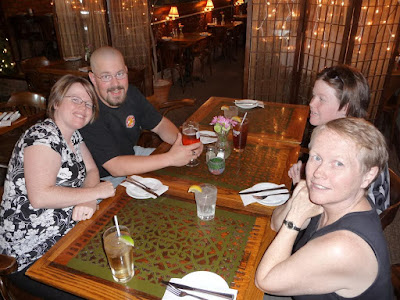 The gang at 13 Main Cafe
Tuesday

We left early and stopped in Wasaga to pick up the bike. John said he figured that I would like the new tires. That was good news. If they stick, the only other concern is whether they will last. 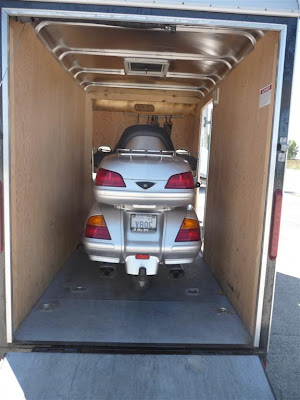 The bike was loaded into the trailer and we gave a couple from Ottawa, whose GL1500 was delivered with a failing alternator, a ride downtown. The guy was recently retired after 26 years in infantry with the Royal Canadian Regiment. I suspect he was an officer because he is now employed in the HR field. I hope their problems worked out.

The trip home was uneventful and the bike was unloaded and put in the garage without trying it.
Posted by Jim "Skid" Robinson on 7/29/2008