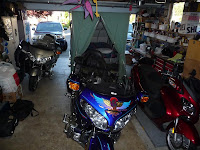 I slept in until 6:45. This picture shows our cozy home away from home, tucked in among the two-wheeled steeds. Sherm had coffee on and then we headed to the Club before breakfast. In the lounge, I met some of the same people I joined three years ago for a workout. Ace and George stand out in my memory and I met Bill (an Ontario expatriate many years ago), Lynn and Jessie as well. George is in his 90's and has done many things in his life. His mind is still very sharp and he tells many interesting tales. I know Ace, a very fine fellow, reads this, so Hello Ace.

We adjourned to the locker room to get our bathing suits on and then joined everyone in the pool, which was a comfortable 86 degrees. I strapped floats to my ankles and took the floating barbells in my hands. The trick was to avoid having the ankle floats upend you. Mary, another Canadian expat from the Alberta side, put everyone through a workout and conducted a simultaneous sing-along. After the workout, we spent some time in the hot tub before hitting the showers. 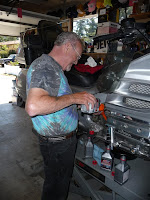 Returning home, Sherm made breakfast. Then we set to work doing the maintenance on the Wing. Rather, Sherm set to work and I helped. The oil change was straightforward but we had some fun with the brakes. There are left side and right side pads for the front and each has their own part number. This is because one pad in each set has a metal shim backing it and the sets are mirror images of each other. Imagine our surprise when we found the pads that were installed 75K kilometers ago were each on the wrong side. After double checking, we installed the new ones the correct way. One of the pads was down to its limit and I guess this was the one that was squealing. The tires still look the same so I guess this should get me home. Thank you, master mechanic Sherm.

Sherm and I took the truck to the new airport (not so easy to find) to get a package, then to an ATM so I could get some cash (first time I have done this in the US) and finally the post office for another package. Then we rode the bikes (he took the Half-A-Busa) to Staples so I could test the brakes. They stopped me just fine. 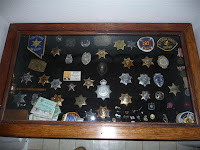 After the errands, we went to a friend of theirs, Kay's, to help her get her new laptop set up. It took a little while since I am new to Vista, but we got it working. Kay's late husband held many positions in law enforcement. She tells me he wore ever badge in this case except one. That includes the British shield from Sussex. She would like to sell this collection so, if anyone is interested, contact Sherm. 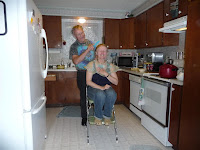 Computer tune-up complete, we returned to the house and Pat made a superb supper of chicken and dumplings, mashed potatoes, asparagus, peas and rice with gravy. This was followed up with custard with whipped cream and a cherry on top. Then Sherm trimmed the hair around Sandy's ears. He said he did this all the time for the guys when he was in the Coast Guard, but Sandy was skeptical. However, the operation was a success.

We got a note from Don telling us that the forecast for the I-5 corridor was going to be 110F with smoke and suggesting we get an early start. With that in mind, we turned in fairly early.
Posted by Jim "Skid" Robinson on 7/09/2008