Roseman is a VROCer from Ohio who is active on the Newsgroup. We also met he and his friend Vicki last summer at Interlochen, where Rosie's snoring and Vicki's giggling gained them notoriety. While we were out west, word came that Rosie would be up fishing on Charlton Lake, south of Espanola. The Sudbury crew moved to set up a meeting.

Gary and Normie picked us up in Gary's car and we headed east for a 1:00 PM rendezvous at the Tim Horton's on the south side of Espanola. There was a truck with Ohio plates in the lot and there, inside at a table in the corner, was not only Roseman but Vicki as well.

We spent some time catching up on things. It was a first meeting for Norm and Gary. I had the unfortunate task of telling Rosie about Kilo and Chuck since he had been out of contact all week.

It was good to see them since they won't be in Interlochen this year. Rosie has to go to Australia on business. What a life:-) 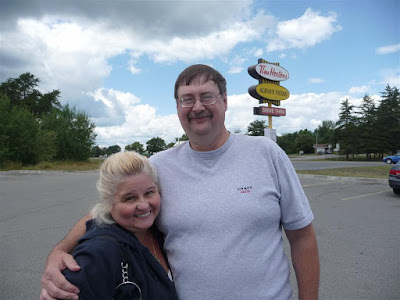 When it came time to go, I got this photo of the two of them (Roseman is on the right) in front of a landmark of Canadian culture.
Posted by Jim "Skid" Robinson on 7/24/2008