As mentioned, we arrived at Malcolm's apartment in West Vancouver on Sunday, Canada Day Eve.

Canada Day was very quiet. We watched things from the balcony and took a short walk. Malcolm went to Surrey for a while to visit an old friend who was in town. On the way back, he got caught up in a massive traffic jam when they closed the Second Narrows Bridge for hours because of a potential jumper.

The fireworks that evening were supposed to be launched from off Ambleside Beach, which would have given us a perfect view from Mal's balcony. But the paper was wrong. There were two displays, one off downtown Vancouver and the other off Dundarave in West Van. We could see one through the Lion's Gate Bridge and just see the top of the other one over apartment buildings. The interesting thing to me is that they were identical and synchronized. 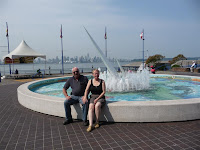 On Tuesday, we headed over to the Lonsdale Quay in North Vancouver. Mal took a lot of back streets that would have confused the Zumo. He and Sandy drove in his Miata while I, due to seating limitations, rode the bike. The photo shows us behind Lonsdale with the City of Vancouver across the harbour. We had coffee with some very interesting friends of Mal's, longtime residents who emigrated in the mid-60's from Israel. 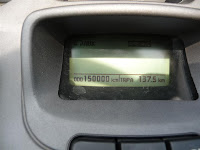 After we left the Quay, Sandy and Mal headed home while I took a bit of a ride to run up the odometer. After surviving street level traffic going straight up the hill in North Van, I got this shot at the ramp off Highway 1 to Cypress Bowl Ski Area. For those who don't speak metric, 150,000 kilometers is equal to about 93,210 miles.

Back at the apartment, I placed an on-line order for an 802.11G wireless card at Best Buy. Mal tried to pick it up yesterday but it seems that, to get the lowest price, you have to order it on-line first. After the notification arrived that they had one in stock, we drove over in the Miata and picked it up. I disabled the old B card and installed the new one and its drivers. No problem. Now I won't have any more problems with routers not configured for B and my link will be almost five times faster. 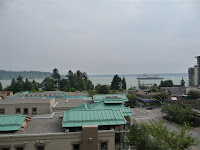 One constant here with the apartment facing the bay is the procession of cruise ships. Almost every morning, one or more arrive at about 6:00 AM, making their stately way under the Lions Gate Bridge to their berth in front of Canada Place. And late every afternoon, they sail back out again for their cruises to Alaska and other points in the Pacific. Some of them are smaller but most are huge. Some day, we may have to take one just to see what it is all about. We did see one other strange arrival. This ship, carrying a large crane from China for delivery in the harbour, had been lying at anchor since we arrived. I have to wonder, with all that steel high up, how it weathered rough seas and how much ballast it carried down low for stability. On Friday, at low tide and accompanied by two tugs, they made their approach. There was more clearance under the bridge than appeared at first.

Saturday morning, we heard the sound of a steam whistle and saw the characteristic puffs of smoke on the rail line coming from North Van. This used to be a regular sound when the Royal Hudson pulled a tour train from here up the coast to Squamish, but that attraction was canceled years ago. The Royal Hudson is now ensconced as a static display in Squamish and CN bought the rail line from BC Rail. We waited for the train to come by but it didn't, so Sandy took Mal's binoculars and could see the engine stopped at Ambleside Park and people wandering about in period costume. 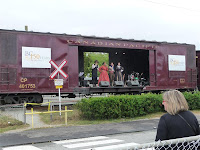 We were curious and so we wandered down to the park. The steam engine was parked in an area blocked by trees with what appeared to be an old F3 diesel unit behind it and a short string of cars. There were vintage autos lined up on the adjacent road and this modified box car was providing entertainment. I spoke to a PR person and found the whole outfit belonged to CP and was celebrating the 150th anniversary of the official establishment of the Colony of British Columbia. CN had shut down their line for four hours to allow this to take place. The box car is the same one used for entertainment on the CP Holiday Train that goes from coast to coast in December, for which Sudbury S.T.O.P. volunteers provided security one very cold night. 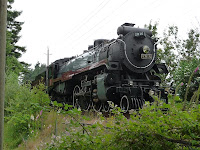 The PR guy suggested I could walk through the park on the other side of the tracks to get a picture of the engine. No. 2816 is a Hudson but not a 'Royal' Hudson. That designation is reserved for the streamlined units like the one that pulled the Royal Family across Canada in the 1930's. This unit was built in 1930 and was refurbished for CP by the BC Rail shops here after being recovered from a museum in Pennsylvania. CP uses it in a goodwill ambassador capacity. I also met two CP Rail Police Sergeants. They knew our friend Norm L. THE CP cop for northeastern Ontario who is retiring soon. 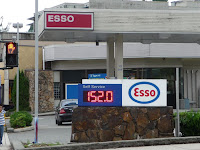 After the park, I stopped at the used bookstore and bought a new book. I have a large one Slammer gave me but Sherm took it to Coos Bay since I won't be able to carry it until we mail some stuff home from here. Then we met Mal and had lunch at the Savary Island Pie Company. As you can see, gas prices (including the new carbon tax) suck.

Today, we went out for breakfast at a local coffee shop (not one Tim Horton's in West Van). Then I checked the bike tires (still holding up although the trip home might be touch and go) and I went for a short ride to Horseshoe Bay and back. The construction on Highway 99 to Whistler is depressing. To make travel easier for the 2010 Winter Olympics, they are ruining a nice riding road.

We will mail a few excess things home from here and head south in the morning. A night with Scorpion~, a couple at Sherm's while I change oil and front brake pads and on to VSP's in Stockton before returning to the WWR in Coos Bay. The weather was really hot and humid when we first got here, then it cooled off, clouded over and rained a bit the last few days. Based on the weatherman's accuracy, I'm not even going to guess what tomorrow will bring......

This week has been a pleasure laying back and enjoying the West Van ambiance. Many thanks to Mal for allowing us to hang out.
Posted by Jim "Skid" Robinson on 7/06/2008