Don introduced us to Basque Family Style Dining in Elko, Nevada last month. Today was the day we would go to the mecca, The Wool Growers French Basque Restaurant in Los Banos. 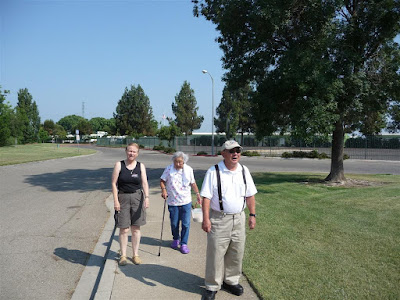 The day started with us going over to pick up Don's mom, Leona. Taking her car, we took some bread over to the local park to feed the birds and then walked a lap of the park.

After the feeding and the walking, we headed south on I-5 for quite a ways. The sky was still smokey and we couldn't see Mount Diablo. About 77 miles south of Stockton, we entered the town of Los Banos. This community has tripled in size over the last few years as people working in San Jose look further afield for affordable living. 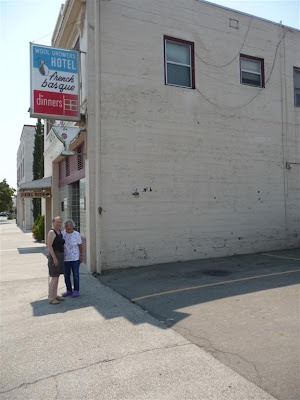 Down at the very end of Main Street and just around the corner, we found Wool Growers. With all the new, fancy places, I can't imagine tourists finding their way here unless they had inside knowledge. We did. 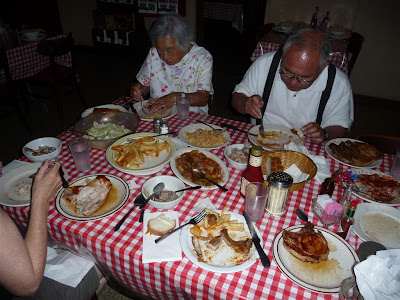 Inside the large dining hall, we were seated and the courses started coming. First, soup, homemade bread and beans. Then there was an iceberg lettuce salad with dressing. This was followed by lamb stew and (a special left over from Sunday because Leona asked) chicken rice. Because it was Tuesday, we got pigs feet in two different sauces. Then the entrees arrived along with french fries. Sandy and Leona had baked chicken while Don and I had pork chops. Note the two large chops next to Don's left elbow. Those were his. I had two more but have already eaten one of mine. After all this was done, I had coffee and we had ice cream. The price for all this, including the wine we declined, was $15 each.

If you are ever in the neighborhood, you can find the Wool Growers at 609 H Street, Los Banos, California.

After lunch,we headed back up to Stockton via SR 165 and SR 99. We stopped in Modesto at Doc's Pit Stop, a BBQ place, but it was closed for the day with no reason being given. Sadly, we continued north. It would have been Don's father Frank's 95th birthday, so we stopped at the cemetery to pay our respects and then at a bakery to pick up the birthday cake Don's sister Laura had ordered. Don also took us on a tour of the very colourful grounds of a Cambodian Buddhist church.

At Leona's house, Sandy did laundry while Don took me over to a Target store (my first) to do some shopping. Then we stopped at his house to take care of some raffle tickets and he gave me a golf lesson. We'll see how that works when I get home. 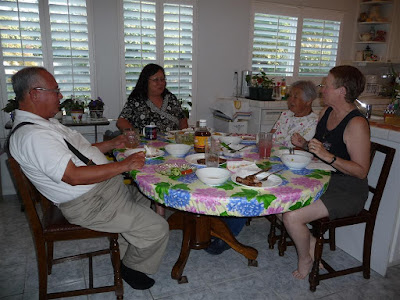 Back at Leona's house, we had a supper of leftover chicken and pork chops from Wool Growers, Dim Sum Laura brought home and salad. This was topped off with Frank's birthday cake. Before it got too late, we had to say our goodbyes and head back to Don's to get ready for the ride north tomorrow.

We plan to take two days to get to Coos Bay. Don has made reservations at a place in Shelter Cove for tomorrow night. Shelter Cove is not on a main road and we need to ride over twenty miles in from US 101. You'll get an idea of the road when it says this should take almost 45 minutes. Stay tuned to this channel and see if we make it:-))
Posted by Jim "Skid" Robinson on 7/15/2008